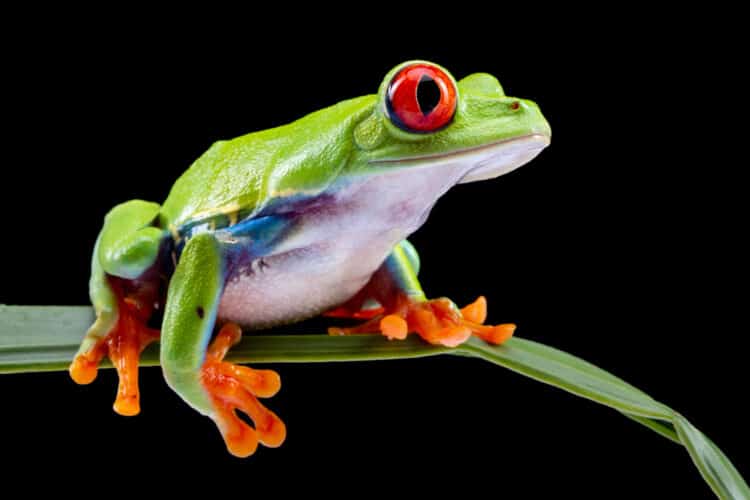 Musicians can sing about anything, including animals, to pass a message. It is no surprise that frogs should be one of their sources of inspiration. The proverbial saying “kiss as many frogs to find your prince” must be one reason. Other songs use frogs to represent many aspects of life, which this article will show you. Here are 10 awesome songs about frogs you might want to listen to.

“A Frog Went Walking” is a song by the Wiggles tailored as a nursery rhyme. It talks about a frog who fell in love with a mouse. It also explains the episodes at their wedding. It featured on the Wake Up Jeff album and was released in 1996. In 1999, it featured in The Dorothy the Dinosaur and Friends video, alongside puppets. According to Rainy Day Mum, songs about frogs are typical nursery rhymes any child below ten will enjoy. The first time its producer made a live version was in Getting Strong. Here, a character called Murray plays the frog, while Dorothy plays Mrs. Mousey. Other characters starring in the live-action were Anthony the pig and Jeff the cook. It’s fair to conclude the song is danceable and perfect for children due to the lyrics’ repetition.

“I Can Be a Frog” is a song by the Flaming Lips, released in 2009 for the Embryonic album. Wayne Coyne unravels a list of wild beasts as Karen O from the Yeah Yeah Yeahs unleashes the animalistic screams. The song talks about a character who claims he can be anything, including a frog, bat, warrior Indian, branch, or even a monkey. The song portrays characters who can represent anything, depending on the energy they get from their significant other.

In 2010, MARINA performed and released “Hermit the Frog,” which features in The Family Jewels album. The singer released it using her stage name, “Marina and the Diamonds.” However, its album version was written and co-produced by Marina, alongside Liam Howe. The title is based on Kermit the Frog in The Muppets. The song was so successful that it became a TikTok sensation in June 2021. This great song is good to listen to if you want to awaken your childhood adventures.

According to Toads’nFrogs, songs about frogs are educational pieces for children, teaching them how eggs metamorphose from eggs to tadpoles to froglets to adult frogs. They can also symbolize fairytales where princesses kiss as many frogs before finding their prince. “Kiss That Frog” by Peter Gabriel is one song that represents the latter interpretation. In this song, Gabriel talks about a sweet little princess on a quest to find her prince after meeting many frogs. Kissing the frogs is her only way out.

“I’m in Love with a Big Blue Frog” is a song by Peter, Paul, and Mary for children aged six years and above. The three singers performed the live version of a children’s book and CD. This song talks about a character in love with a big blue frog. From the description, a frog is a man whose height is six foot three inches tall. The singers claim the frog doesn’t look as bad as most people perceive.

Sesame Street was a popular kids’ show in the 1990s. The show’s lead character was Kermit the Frog, who sang “This Frog” in 1991, alongside the Tarnish Brothers. The character uses the frog to express his joy in being independent. We don’t know about you, but if it takes a frog to teach you about the benefits of independence, how else can you enjoy such a song?

According to Ranker, “Every Frog Has His day” is another fantastic song about frogs you should consider adding to your playlist. Dubbed a lyrical master, Reed used this song to portray his mastery of poetry, making him one of the most influential artists in the 20th century. The song means that each person is destined to make it in life. It’s an expression to encourage someone who feels they’ve not yet reached their full potential.

“Frog Trouble” is a song by Mark Lanegan, released in 2003. It’s a heartbreak song illustrating the singer’s disappointment about how his life was turning out. He uses frogs to represent many things. For example, if you’re having trouble navigating your co-workers, life can get messy. Some frogs can represent messed up romantic relationships. Whatever the case, we believe frog trouble can happen to anyone, no matter the circumstances.

“A Frog Went Walking” is another fantastic song by The Wiggles for The Dorothy the Dinosaur and Friends video. It’s also about a frog who got madly in love with a mouse and couldn’t wait to put a ring on her finger. The singers, represented by puppets, express a love message that sounds like a marriage proposal.

In 2004, an English alternative rock band, Keane, composed and performed “The Frog Prince.” The band released it as a closing track for their Under the Iron Sea album. The song is based on Tom Chaplain’s conversation with one of the band members in a drunken state in Toronto. The duo expresses their disappointment in one of their band members who was badmouthing them.

“Bull Frog Yay” is a hip-hop song by Project Pat, released in 2007. The rapper talks about the injustices he faced as an Afro-American. He says that the Wallstreet only represented a few individuals with money. However, he believes even underprivileged people need a little bit of empathy to navigate life.

Metaverse could be worth $5 trillion by 2030: McKinsey report By Cointelegraph

The 10 Best Jacquees Songs of All-Time

The 10 Best Will Downing Songs of all-Time