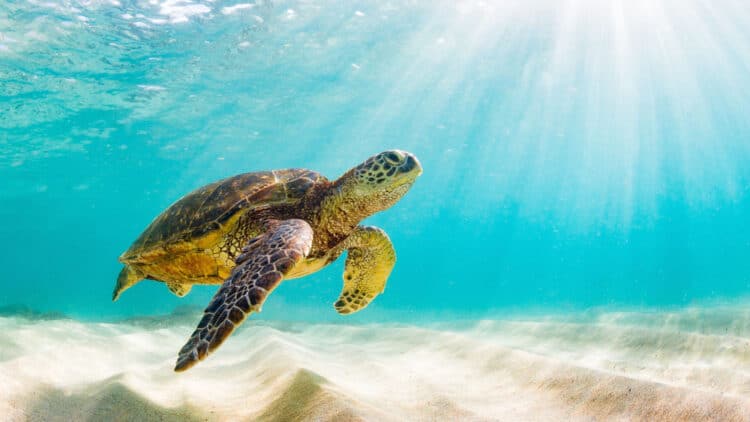 The official day celebrating turtles is May 23, every year. Americans recognized the date when the American Tortoise Rescue saved the lives of turtles and tortoises in 2000. It is no surprise that songs about turtles keep emerging, with artists using them as symbols to portray different meanings/ interpretations. Some have “turtles” in their titles, while others sprinkle it in lyrics. Either way, here are ten awesome songs about turtles that you should consider listening to.

“Poor Turtle” is a song by The Presidents of the United States of America, released in 2008. According to Ranker, it is the eleventh single on their These Are the Good Times People album. The band compares turtles to a guitar or bass. They keep saying that the turtle keeps shutting tight in his hard-shell case. One of them lost their turtle, and they can’t imagine being away from him. Some critics claim it represents the band’s breakthrough despite controversies surrounding their music style.

“Turtle Blues” is a song written and performed by Janis Joplin, released in 1969. She wrote the music for a man who was mean to her. From the lyrics, it’s clear that Janis was on a revenge mission after quitting a toxic relationship. She keeps saying, “she’s a mean woman who doesn’t hesitate to hide from her lover like a turtle retreating to his hard shell at the slightest provocation. The rock song brings out her powerful mezzo-soprano vocals, despite being only 29 at its release.

“The Mighty Turtle Head” is an instrumental song about turtles, performed by Joe Satriani. It’s the second single from his studio album, Time Machine. The gold-certified album peaked at 95 on the US Billboard 200. It also won the Best Rock Instrumental Performance award at the Grammys in 1995. While the lyrics to this song are still unavailable, its instrumentals reveal Satriani’s power behind the guitar.

This list of songs about turtles cannot be complete unless children’s music features. The Kiboomers released a children’s piece titled “Little Turtle” in 2014. The song opens with, “There was a little turtle. He lived in a box. He swam in a puddle.” The last stanza talks about the turtle catching anything he could find, but not the child. This is a fantastic nursery rhyme you should add to your playlist if you want to entertain children or teach them how to sing.

“Song about Turtles” is an alternative/Indie song by Bonecage, released in 2018. It talks about turtles, in general, and how they play a significant role in the ecosystem. So as you know, turtles and tortoises date back to the time of dinosaurs. That means they existed over 200 million years ago. A song about them justifies their existence and how they should be protected from predators.

According to My Wedding Songs, turtles and tortoises were endangered species until the American Tortoise Rescue team joined the rescue in 2000. Since then, artists have emerged with songs supporting tortoise and turtles’ rescue missions. One piece emphasizing this fact is “Save the Turtles” by The Beluga Boys, who were inspired by the VSCO meme. Unfortunately, this is the only song the boy band performed. We hope they’ll compose more songs in turtles’ honor.

In 2021, Pinkfong released their “Sea Turtle” song as children’s music. It features under the album Sea Animal Songs, Pt. 1. The lyrics are repetitive, with “Tooty ta sea turtle!” repeated throughout, making it a great nursery rhyme any child will enjoy. It’s also an excellent educational song, teaching kids what turtles look like and their everyday lifestyle.

Another track about turtles is Sturgill Simpson’s “Turtles All the Way Down.” The American country music singer rleased it in April 2014 for his Metromodern Sounds in Country Music album. He was inspired by Indian philosophy, Anavashtha. The philosophy denies the underlying basis or ground’s existence. Part of the lyrics also talks about his encounter with the Buddha, Jesus, and the devil. The music ballad has an instrumental accompaniment for the song “Me and Bobbie McGee,” originally performed by Waylon Jennings. It peaked at number four in the article titled, 25 Best Country Songs of 2014.

“Turtle Power!” is a rap song by the rap duo, Partners in Kryme. The duo released it in 1990 for the album Teenage Mutant Ninja Turtles: The Original Motion Picture Soundtrack. The song popularized the film’s franchise, peaking at 13 on the US Billboard Hot 100. It also became a major hit in New Zealand, peaking at 7. In the most recent live performances, one of the rap members was replaced with ‘Raphael; he’s the bad boy of the group.’

“Turtles Are Cool” is an English album composed and performed by Ouse. Released in 2018, the track talks about how cool turtles are, making them one of the most treasured sea animals in the US. Ouse talks about his broad experiences in the limelight in this song. Some parts talk about him needing an Audi, not a Bentley. Whatever that means, you have every reason to listen to the talented Ouse’s rap lyrics and instrumentals. The animations on the video are also quite entertaining.

Al Falaj Hotel – Where You Should Stay When in Muscat, Oman

10 Good Songs to Wake Up To