Last night, for the third Wednesday in a row, I ventured to the Whiteside Theater in downtown Corvallis to watch an old movie. Two weeks ago, it was National Lampoon’s Christmas Vacation. Last week, it was It’s a Wonderful Life. And yesterday was Star Wars. The place was packed! So fun to watch a favorite film in an old theater with a couple of hundred other fans.

I’ve also been watching many movies at home lately. I finally have the time. According to Letterboxd, I’ve seen seventeen films in December. I watched nine in November. I enjoy exploring the nooks and crannies of cinema. (I highly recommend Letterboxd, by the way. I’ve been using it to log my film watching for two years, and I can no longer imagine not using it.) 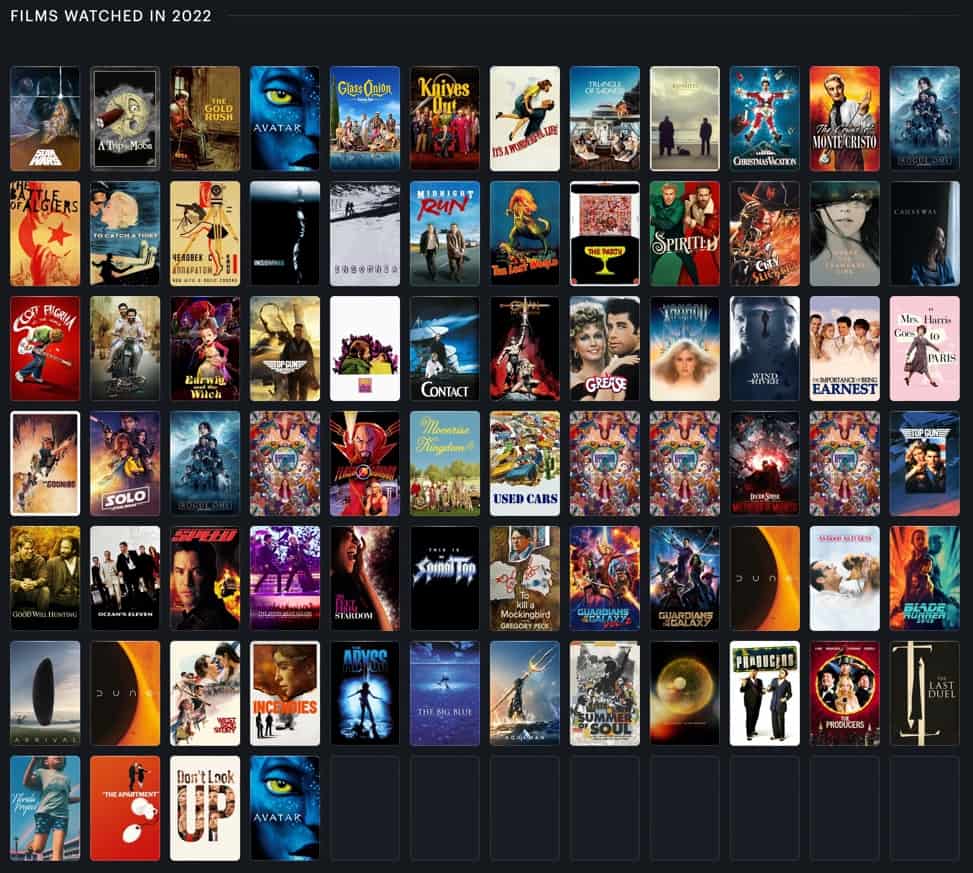 My days have been busy, too.

In the mornings, as always, I walk the dog. Lately, though, we’ve been taking longer walks: 90 minutes, two hours. Part of this is because I’ve embarked upon a crazy project to map every Little Free Library and farmstand in town [my map]. But a larger part is because I am, at last, prioritizing fitness again. 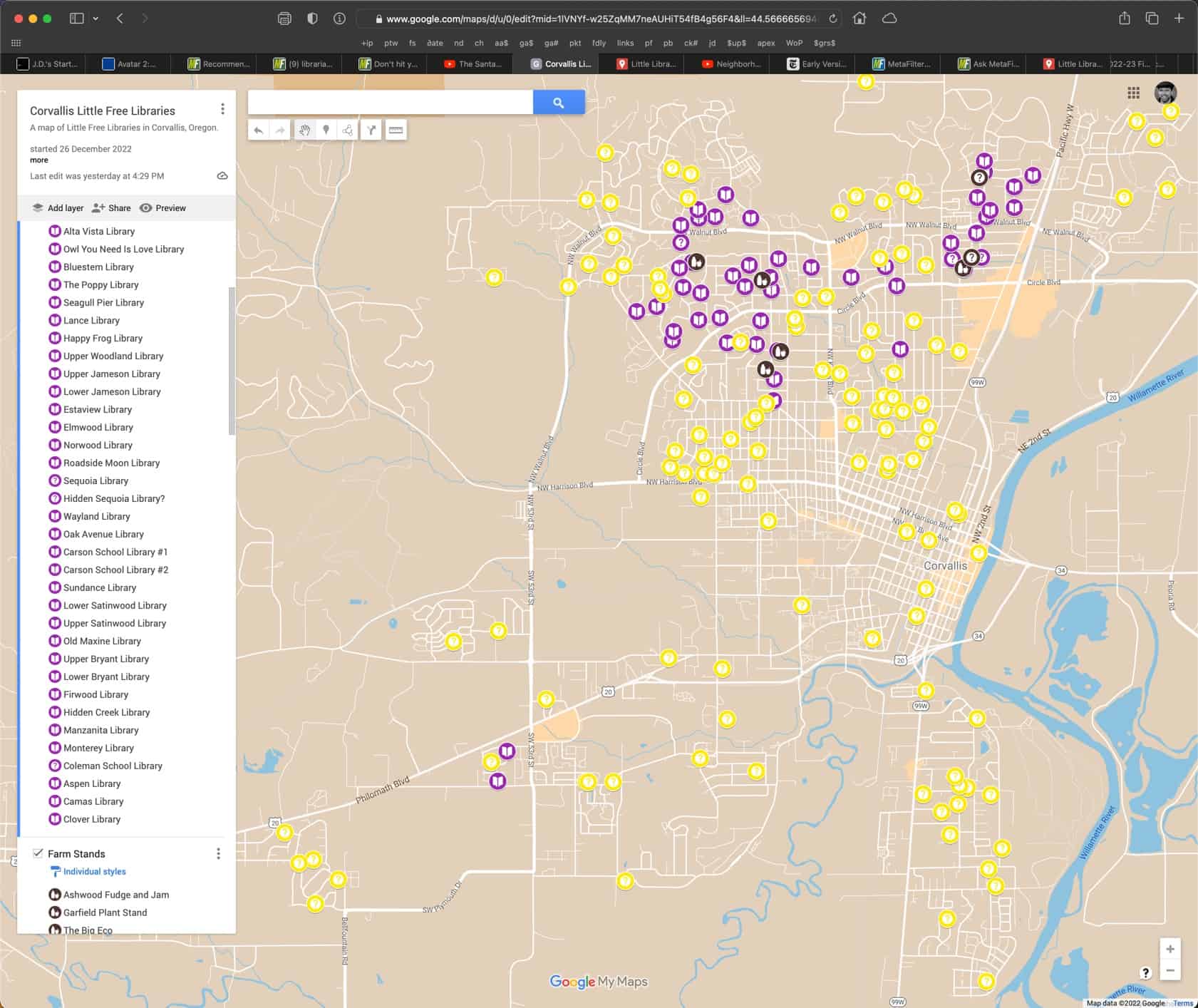 Some of you may recall that I lost forty pounds during COVID. I was happy with my fitness going into 2021, but then I got sidetracked by selling a house, buying a house, and a very shitty 2022. I fell into my bad habit of stress eating. I didn’t do any exercise. I gained fifty pounds — everything I’d lost in 2020 and more. Well, for the past three weeks I’ve been both exercising and eating right. I’m back at the gym. In January, I’m joining some friends for a 30-day yoga challenge.

To make it easier to make healthy choices with food, I’ve slowly been re-vamping our kitchen. We’ve lived in this house for fifteen months now, so we have a better idea of where different kitchen tools should live. Plus, after more than a decade with Kim, I’ve decided it’s time to ditch some of our old kitchen stuff (some of which we’ve owned since the 1990s!) and upgrade to better tools. I now own three nice knives, and they’re a joy to use.

Meanwhile, after eighteen months of talking about art, I’ve begun to dabble in it. Not much, but some. Earlier this month, I started a daily art journal. I’m playing with pens and drawing styles. I bought a cheap watercolor set and am having fun playing with that. When I’m not watching movies, I’m often watching art instruction on YouTube.

Plus, I’m doing other fun stuff. I’m reading books and comics. I’m spending more time with friends — both on Zoom and in Real Life.

In short, December has been my best month in a long time. I have been leading a values-driven life and it shows. I can feel it. The people around me can feel it to.

But notice what’s not on that list. What am I not doing? Writing about money. Since my mother died in early October, I’ve been on a deliberate three-month sabbatical. It’s clear that I needed it. It’s also clear that I probably need more time to myself. Like all of 2023.

I mentioned earlier this month that I want to make 2023 the Year of J.D. And it’s true. That’s exactly what I’m going to do. I’m going to prioritize doing what I want when I want it. I don’t mean this in some hedonistic way. I mean it in a “pursuing that which fulfills me” way. Does that make sense?

My number one priority for the coming year is to focus on fitness. Kim and I are doing this together for the first time since we met at Crossfit, and it feels awesome to be on the same page. It’s so much easier to do this as a team. Along with exercise and health eating, I’m also addressing some lingering health issues: blood pressure, sleep apnea, etc.

My number two priority for 2023 is to continue building (and re-building) friendships here in Corvallis. Although I identify as an introvert, it’s clear that I’m not. I need social interaction, and I haven’t been getting enough of it. I’m working on it.

My third priority for the next twelve months is to dive into art. I’ve struggled to start for a couple of reasons.

This month, I’ve stopped thinking about these sorts of questions and instead begun doing whatever I want with pens and paint. The only way to figure out where to go is to try things. Plus, I’m paying attention to what excites me. Comics excite me, obviously, and always have. But I’m also realizing that I love what I’d call “mid-century spot illustration” style: heavy brush strokes, kind of cartoony.

A final priority is to decide which projects to pursue around the house. Kim and I moved here at the end of August 2021. We love Corvallis, and we know this is where we want to live. Our house is perfectly fine, but…it’s not perfect. (No house ever is.) After “wasting” $150,000+ making changes to our last house then moving after four years, I’m more cautious here. If we stay, I’m willing to spend money and effort to improve things. But if we don’t, I don’t want to expend the resources.

So, Kim and I need to make a decision: Do we commit to staying at this place for, say, a decade or so? Or do we agree that it’s only a temporary place? If we are going to stay, then I have a couple of projects I want to tackle almost immediately. I want remodel a bathroom — maybe two. And I want to give the back yard a major overhaul. (The “bones” of the yard are solid, but the space is overgrown with ferns and weeds after nearly a decade of neglect.)

So, those are my plans for 2023. Again, notice how Get Rich Slowly is not on this list.

This is part of a larger question about what role I want the internet (and computers themselves, really) to play in my life. Over the past few years, it’s become clear that for me (as with many others, I know) the internet provides just as many problems as it does solutions. And, in fact, I suspect that my recent struggles with mental health have been exacerbated by the internet. Perhaps even caused by the internet.

One option is to simply cut the cord completely and walk away. Sell the site. Give up writing about money forever. Consider it a phase of my life and move on. There are a lot of upsides to this choice, I’ll admit. But I’m not convinced it’s the best option. What if I end up regretting the decision? What if I do decide I want a place to talk about money again?

Besides, there are two big reasons I want to keep Get Rich Slowly (or, perhaps, Money Boss in its stead). For one, I really do want to create an online encyclopedia of personal finance, a place uncluttered by ads and analytics and bullshit, a place where people can get reliable, unbiased money info. Second, and perhaps more importantly, I’m a writer. I express myself through words. I enjoy having an outlet to share what I’m feeling. Just like this!

I go back and forth.

But you know what? It’s not a decision I have to make right now. Right now, the best thing is to simply do what I’ve been doing. It seems to be working. December has been all about me and my needs, and that’s what 2023 will be too.

And from time to time — for now, at least — I’ll drop by Get Rich Slowly to share what I’ve been thinking and doing.

Happy holidays, everyone. I’ll see you next year.

Texans came together to save more than 1,500 bats from wintery doom

Resources for Writing a Will?