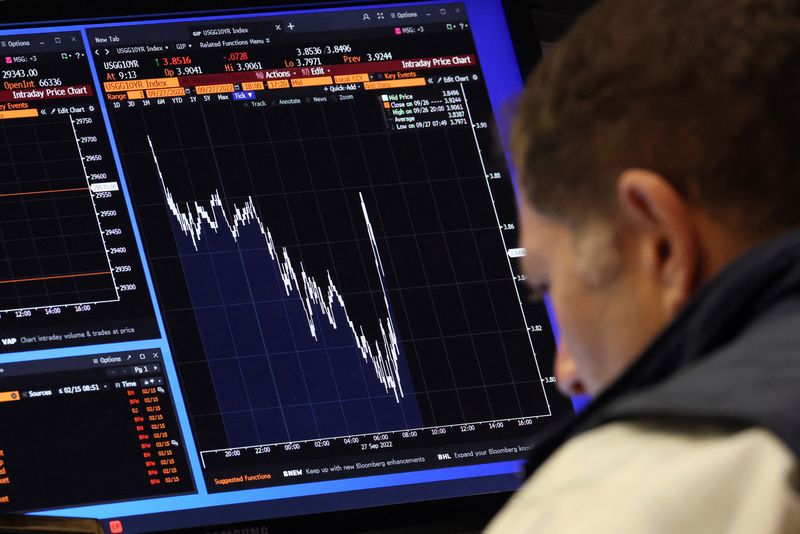 LONDON (Reuters) -Investors with classic “60/40” portfolios are facing the worst returns this year for a century, BofA Global Research said in a note on Friday, noting that bond markets continue to see huge outflows.

Soaring inflation, rising interest rates, war in Europe and an enery crunch have seen valuations plunge across asset classes in 2022.

The of shares is down around 23% this year, having shed 15% since mid-August alone.

Hopes that inflation may be receding were dashed on Thursday after data showed U.S consumer prices increased faster than expected in September, reinforcing expectations that the Federal Reserve will deliver another 75-basis points interest rate hike next month.

So-called “60/40” portfolios typically have 60% of their holdings in stocks and the remaining 40% in fixed income.

BofA said annualised returns so far in 2022 on portfolios like these are the worst in the past 100 years, while those on “25/25/25/25” portfolios that hold equal portions of cash, commodities, stocks and bonds have dropped 11.9%, the worst sinced 2008.

Equity funds recorded $0.3 bln of inflows during the week to Wednesday while bonds saw massive outflows of $9.8bn.

It was the sixth week in a row that investors sold financials, the first outflow from infrastructure in 11 weeks and the 18th week of outflows from bank loans, Bofa said.

India stocks lower at close of trade; Nifty 50 down 0.25% By Investing.com