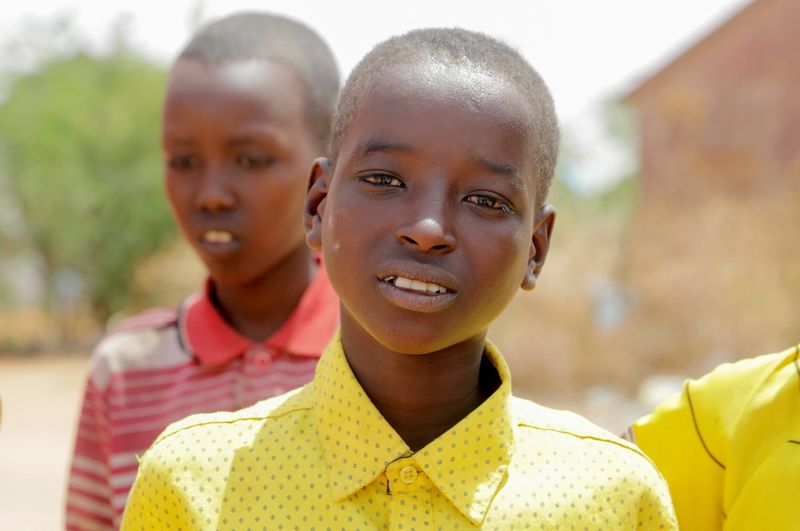 © Reuters. Bashir Nur Salat poses for a photograph with his classmates at the Kabasa Primary School in Dollow, Gedo Region, Somalia May 25, 2022. Picture taken May 25, 2022. REUTERS/Feisal Omar

DOLLOW, Somalia (Reuters) – Each morning in this Somali border town, 11-year-old Bashir Nur Salat plots his day’s mission behind a crooked wire fence. Armed with only a friend’s yellow school shirt, a borrowed book and toothy grin, he eyes his prize through the mesh: lunch.

Bashir lives where three crises converge – global warming, spiralling food prices and war. He, like millions of others in Somalia, are in the crosshairs of what some aid workers are calling the “The Three Cs”:  climate change, costs and conflict.

The worst drought in four decades in war-torn Somalia forced his family to leave their farm three months ago and to move about 100 kilometers (62.5 miles) north to the town of Dollow, on the border with Ethiopia.

Now, he leads a pack of younger children who gather when the Kabasa Primary School serves its students food. Through the school’s wire fence, the children stare at students inside gulping warm porridge or plates of beans and corn served as part of a U.N.-supported program, one of the few regular sources of food in the town.

Many of the gang were among the latest influx of people into Dollow, too late to register for schooling. One by one, they slink through the broken gate and dart across the dusty schoolyard to grab a meal when the teachers aren’t looking.

“When I don’t get food, I’m so hungry: I lie down and I can’t sleep,” Bashir said quietly. He had eaten no dinner the night before nor breakfast that morning. His eight brothers and sisters at home were all hungry, he said.

The drought, which began last year, is predicted to worsen, exacerbated by climate change, many scientists and humanitarian organizations say. A third of livestock is already dead from thirst or hunger. Crops and fruit trees have withered.

Somalia, riven by a long-running Islamist insurgency, needs to import more food but people can’t afford to buy it. Foreign aid is dwindling and food prices spiking because of war in Ukraine, the world’s fourth-largest grain exporter.

At least 448 children have died since January while being treated for acute malnutrition, the United Nations said. The figures are likely a fraction of the true deaths since many will have been unable to reach help.

The United Nations warned this month that more than a third of Somalia’s 16 million people need food aid to survive. Some areas could face famine this month. Aid in some places will run out in June.

NO TIME TO RECOVER

Bashir’s family had never before left their home in south-central Somalia, even when famine in 2011 claimed more than a quarter of a million lives, most of them children. Aid workers say deaths may approach those levels again in this drought.

Bashir’s family did not move then. Some livestock survived, so they stayed in their farm near Ceel Bon village.

Not this time. The drought took all of their 12 cows and 21 goats – a small fortune in a country where wealth is counted in animals. The family once enjoyed three meals a day: creamy milk from the family cows now reduced to scattered bones; and beans and sorghum from fields now parched and cracked.

“I’ve never seen a drought like this before,” said Bashir’s 30-year-old mother. She and her nine children now sleep on two mattresses in Dollow.

On a good day, Bashir’s father may make $2 selling charcoal in a nearby town, but since May 2 he has managed to send only $10 because of lack of work. The family has not received any food aid, she said.

Such desperation is set to become more common in Somalia, and beyond, as rising temperatures fuel more natural disasters, many scientists say. In the last 50 years, extreme weather events have increased five-fold worldwide, according to the U.N.’s World Meteorological Organization (WMO).

The Horn of Africa, including Somalia, is at its driest on record. This year’s March-to-April rains – the first of two annual rainy seasons – have been the smallest in 70 years, and the second rains from October to December are also predicted to be unusually dry, according to a warning last month from a group of 14 meteorological and humanitarian associations, including the WMO.

“We’ve never seen a four-season drought before, and now we’re likely to see a fifth” in October, said climatologist Chris Funk from the Climate Hazards Center at the University of California, Santa Barbara.

“This drought has been made much more likely due to climate change,” Funk said.

The El-Nino-La Nina weather cycle halfway across the world in the Pacific is partly influencing the warm, dry air over Somalia, as is the Indian Ocean Dipole climate pattern. When the Dipole is positive, it is warmer in the west of the Indian Ocean and more rain falls in East Africa. Now, the Dipole is forecast by the WMO to go negative until the end of the year, causing dryness over the Horn.

But those alone don’t explain the steep decline in springtime rains over the last 20 years, said Funk.

Ocean warming may also play a part. Climate scientist Abubakr Salih Babiker of the WMO Regional Office for Africa said the Indian Ocean is among the fastest-warming water bodies in the world.

With oceans absorbing much of the increasing atmospheric heat, scientists believe warming Indian Ocean waters may be evaporating and raining down more rapidly over the ocean before reaching the Horn of Africa, leaving dry air to sweep across the land.

Another factor: air temperatures in Somalia have increased an average 1.7 degrees Celsius from the preindustrial average – faster than the global average of 1.2 degrees, said Babiker. Warmer air speeds up evaporation from soil and plants.

The Horn of Africa has seen other climate-linked disasters in recent years – damaging floods, a record number of cyclones and vast locust swarms – leaving the region staggering from one crisis to the next, he said.

The children’s ward at Dollow’s hospital was full of listless patients, as were the maternity and outpatient wards.

Every bed was occupied when Reuters visited in May, with age-height-weight ratios sometimes veering into the red. Weakened by severe malnutrition, some children had serious infections, including measles.

At the school where Bashir hunts for food, 10-year-old Suleko Mohammed says she lost three siblings to measles in six weeks – two brothers, aged 2 and 3, and her older sister who used to help her with homework.

They now lie under piles of rubble and thorn branches in a graveyard next to the playground. As she spoke between classes, mourners were digging another small grave.

Down the road, market stalls displayed watermelons, mangoes, beans, and bags of flour and wheat – too costly for many.

Food prices have jumped by up to 160 percent in parts of Somalia, due to the drought and global supply disruptions from the conflict in Ukraine. Even in good times, Somalia imports over half its food.

The government has become alarmed by what it says is the slow international aid response, with its special drought envoy Abdirahman Abdishakur Warsame saying countries need “to pay attention to this drought before it becomes a famine.”

“All human lives are equal,” he told Reuters. “The international community, particularly the Western nations, are paying more attention to Ukraine than the other crises.”

To date, Somalia has received just 18% of the $1.46 billion it needs in humanitarian aid this year, according to U.N. figures – well below the level of response last year. Ukraine, by contrast, has received 71% of its requested $2.25 billion for six months. Senior U.N. officials have repeatedly sounded the alarm about the shortfall of aid in the Horn of Africa to tackle the worsening drought.

Dollow is better served by aid agencies than most Somali towns and is among the safest places from the al Qaeda-linked insurgency, one of the world’s longest-running conflicts.

More than 520 aid workers have been kidnapped, injured or killed over the last 15 years – the majority of them Somali. In Dollow, Ethiopian soldiers patrol the streets and keep order.

The Kabasa Primary School was established to cope with the influx of families ravaged by the 2011 famine. Admissions swelled again during the 2016-17 drought, when early humanitarian intervention kept the death rate low.

The meal program entices them to stay in school. Schools in Somalia get 41 U.S. cents per child for two meals a day, said the U.N.’s World Food Programme.

But dwindling funds have already forced cutbacks to the program supporting 110,000 Somali children. Schools have just started a two-month break; there is no funding for when classes resume in August.

Teachers said Bashir and his gang were among at least 50 unenrolled children who appeared daily hoping for meals. Sometimes, teachers pushed them back. Sometimes, they offered leftovers. Sometimes they turned a blind eye.

“If they eat the food, then there is not enough for the students,” said Kasaba’s principal, Abdikarim Dahir Ga’al, as he watched Bashir’s gang slip into the schoolyard.

Ga’al pretended not to notice. It was the last day of term.

Outside, Bashir scrambled among the last students to receive their meals, emerging triumphantly from the scrum with a metal plate of bean and corn mash.

His grin was wide and his head held high. At last, he would eat.

Telegram’s Premium subscription is here and it costs $4.99 / month

Some 927,000 still without power in Puerto Rico after Fiona By Reuters

Nanjing University Sets Up One of the...