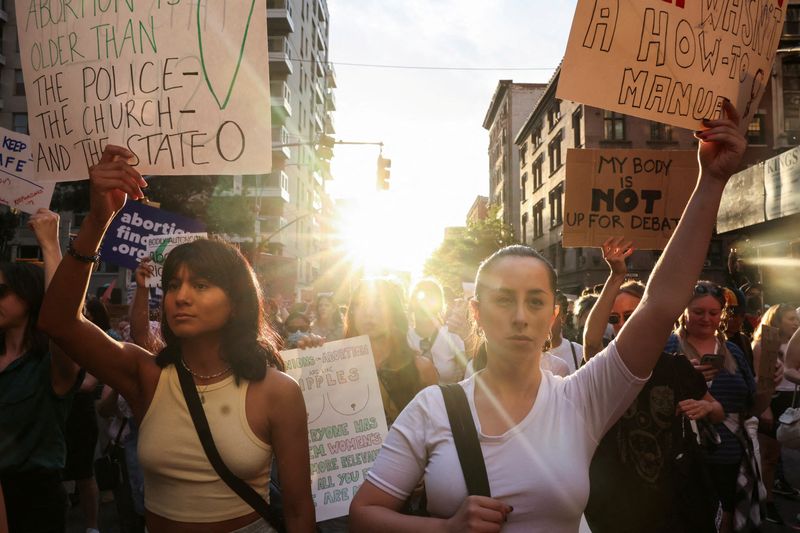 The sweeping ruling by the court, with a 6-3 conservative majority, was set to vastly change American life, with nearly half the states considered certain or likely to ban abortion. Conservative Justice Clarence Thomas suggested the court’s reasoning could also lead it to reconsider past rulings protecting the right to contraception, legalizing gay marriage nationwide, and invalidating state laws banning gay sex.

“The Supreme Court has made some terrible decisions,” Democratic President Joe Biden said on Saturday.

He added that the White House would look to police how states enforce bans, with administration officials having already signaled they plan to fight attempts by states to ban a pill used for medication abortion.

“The decision is implemented by states,” Biden said. “My administration is going to focus on how they administer and whether or not they violate other laws.”

Christian conservatives had long fought to overturn Roe, with Friday’s ruling a cherished win that was the result of a long campaign to appoint anti-abortion justices to the top court. The ruling had the support of all three justices appointed by former President Donald Trump.

It is at odds with broad public opinion. A Reuters/Ipsos poll last month found that about 71% of Americans – including majorities of Democrats and Republicans – said decisions about terminating a pregnancy should be left to a woman and her doctor, rather than regulated by the government. That support is not absolute: 26% of respondents polled said abortion should be legal in all cases while 10% said it should be illegal in all cases, with the majority supporting some limits.

The ruling will likely influence voter behavior in the Nov. 8 midterm elections, when Biden’s Democrats face a high risk of losing their razor-thin majorities in the House of Representatives and possibly the Senate. Some party leaders hope the decision will win over suburban swing voters, though activists expressed disappointment and demoralization at suffering such a defeat while their party held total power in Washington.

“They can ask for vote for more power but don’t they already have the Congress and the White House?” said Patricia Smith, a 24-year-old supporter of abortion rights, who was headed to the Supreme Court to protest. “They have not been able to pass much in terms of legislation despite the power, so what is the point?”

The decision came just a day after the court issued another landmark ruling finding that Americans have a constitutional right to carry a concealed gun for protection — leading them to invalidate a New York state law that set strict limits on concealed carry permits.

The two rulings showed an aggressively conservative court ready to flex its muscle and remake American life at a time when Congress is often deadlocked and struggles to pass major policy changes.

It also signaled that Chief Justice John Roberts, a conservative who preferred to act incrementally, no longer holds the power to slow the court’s action. Roberts had voted to support the Mississippi abortion ban that was the subject of Friday’s decision, but did not vote to overturn Roe itself.

TEARS, ANGER AT THE ‘PINK HOUSE’

The case that led to Friday’s decision revolved around a Mississippi law that bans most abortions after 15 weeks of pregnancy, before the fetus is a viable outside the womb. The Jackson Women’s Health Organization, nicknamed the “Pink House” because of its bubble gum-colored paint, was named in the case.

The clinic was still operating on Saturday morning, with escorts showing up to the state’s sole abortion clinic around 5 a.m. to prepare for the arrival of patients.

Anti-abortion protesters began setting up ladders to peer over the property’s fence and large posters with messages including “abortion is murder” not long after.

Coleman Boyd, 50, a longtime protester outside the clinic who frequently comes with his wife and children to shout gospel through a bullhorn, incorrectly told women waiting for appointments that they were violating the law.

In truth, Mississippi’s law will not shut down the clinic for another nine days. Boyd called the Roe ruling “history” but “definitely not a victory,” noting that he wanted to see an end to abortion in all states.

Protesters had flocked to the Supreme Court on Friday, which has been surrounded by an 8-foot (2.4 m) high black fence since shortly after a draft of the decision overturning Roe leaked early last month. More were expected on Saturday.

Elsewhere around the country, some protests turned heated. Police in Arizona on Friday deployed tear gas against abortion-rights activists outside the state Senate.

Why Choose Tinggly For Your Next Middle East Getaway?