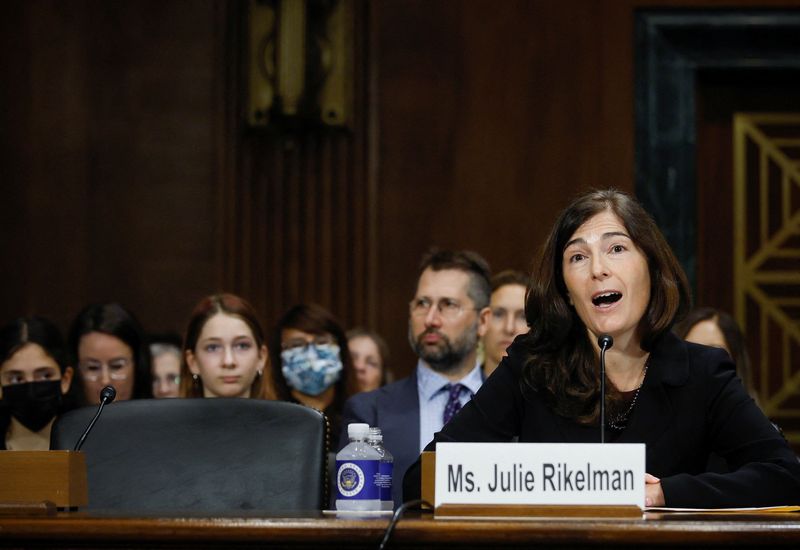 (Reuters) – The lawyer who represented the Mississippi clinic at the heart of the U.S. Supreme Court case that resulted in the overturning of women’s constitutional right to abortion pledged during Senate testimony on Wednesday to follow that ruling despite her past advocacy if she is confirmed to the federal judiciary.

Julie Rikelman, nominated by Democratic President Joe Biden to serve on the Boston-based 1st U.S. Circuit Court of Appeals, told the Senate Judiciary Committee in her confirmation hearing in Washington that she would follow the June ruling despite having fought to preserve abortion rights.

Her role in that and other cases made her a target for Republican criticism throughout the hearing, with some of the panel’s most conservative members questioning her support for what Senator Josh Hawley labeled “radical” abortion rights laws.

“You have spent the majority of your professional life as an extreme zealot advocating for abortion,” Republican Senator Ted Cruz told Rikelman. “That is clearly a heartfelt and personal passion of yours.”

Democrats are seeking to highlight Republican opposition to abortion rights ahead of the Nov. 8 midterm elections in which control of Congress is at stake. The conservative-majority Supreme Court overturned its landmark 1973 ruling Roe v. Wade that had legalized abortion nationwide.

Rikelman represented Mississippi’s only abortion clinic in challenging a Republican-backed law that banned abortion after 15 weeks of pregnancy.

Several Republican-led states have since moved to ban or restrict abortions, including Mississippi.

Republican Senator Mike Lee took issue with Rikelman’s claim in an article by Axios that the Dobbs ruling would result in the “biggest public health crisis that we have seen in decades.”

“In a world in which more babies are being born and being born alive than being aborted, you call that a public health crisis?” Lee asked.

Rikelman did not shy away from having advocated for the ability of “women to be able to make their own personal medical decisions” and against the overturning of Roe v. Wade while working as a lawyer at the Center for Reproductive Rights.

But Rikelman said her personal views do not matter because as a lower court judge, she would be bound by U.S. Supreme Court precedent, including its decision in the Dobbs case, which she promised to “absolutely” follow.

Wall St declines, with investors on edge before CPI data Friday By Reuters