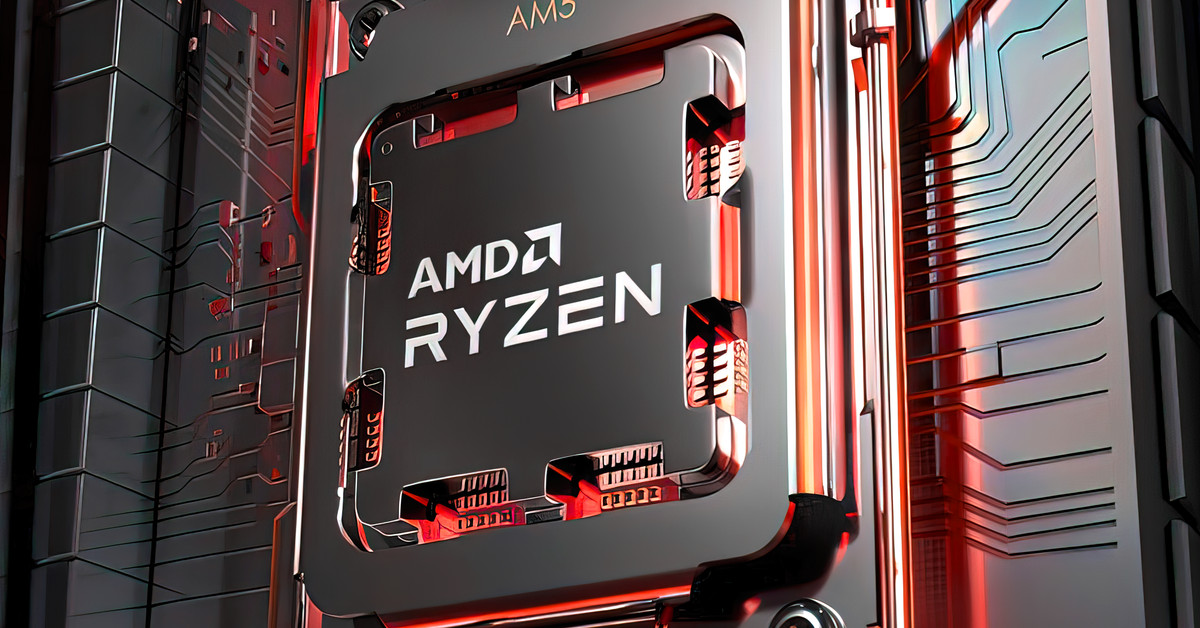 The flagship Ryzen 9 7950X chip is priced at $699 and features 16 cores, 32 threads, and a boost clock of up to 5.7GHz. We won’t be reviewing that flagship chip just yet, as AMD has only supplied the Ryzen 9 7900X in time for review, which ships with 12 cores, 24 threads, and a 5.6GHz boost for $549. AMD promises a 13 percent instructions per clock cycle (IPC) uplift over the Ryzen 5000 series and up to a 29 percent increase in single-threaded performance.

All of these promises sound good on paper, but with Intel’s 13th Gen launch looming and the potential for an Intel chip to hit 6GHz out of the box, will AMD’s improvements be enough? I’ve been testing AMD’s Ryzen 9 7900X against Intel’s Core i9-12900K over the past week to find out.

AMD wipes the floor with Intel on creator workloads and apps with the 7900X, but gaming is more of a mixed bag.

How we rate and review products

AMD’s new Zen 4 processors come with the first big change to AMD’s sockets in six years. The new AM5 platform moves these latest Ryzen chips to DDR5 memory and up to 24 PCIe 5.0 lanes. Support for PCIe 5.0 is mostly still future proofing right now, as even the latest RTX 40-series GPUs won’t support this standard simply because we haven’t hit the limits of PCIe 4.0 in the GPU space yet. We’re also still waiting on the first PCIe 5.0 SSDs to appear, but Corsair has teased 10,000MB/s sequential read speeds, so drives should start appearing soon.

For now, AM5 means that you’ll need a new motherboard and DDR5 memory for these new Ryzen chips. You probably won’t need a new cooler though. I was able to use Corsair’s H150 Elite LCD without any changes required, and that should be the same for most coolers that already support AM4.

AMD will have four flavors of socket AM5 motherboards: X670E, X670, B650E, and B650. AMD says that its X-series chipsets support overclocking, and previous B-series boards have had a more limited number of PCIe lanes. The flagship X670E and X670 chipsets will be available immediately at launch, but the lower-cost B650E and B650 series boards won’t be available until early October. ASRock, Asus, Biostar, Gigabyte, and MSI will all have high-end boards available for the new Ryzen 7000 chips.

While I didn’t notice any performance-related issues with MSI’s Meg X670E, the introduction of DDR5 support on AM5 chipsets has clearly added some early issues that motherboard makers will need to address with BIOS updates. A memory training process takes place at boot and adds around 30 seconds to the boot time. AMD says this will be addressed in upcoming BIOS updates, but it’s an annoying wrinkle for early adopters.

Likewise, putting the AMD machine into sleep mode causes issues. I wasn’t able to successfully resume from sleep quickly, either. AMD says it’s working on a fix for this, too, which will hopefully be available very soon.

The Verge doesn’t review processors in the traditional sense, so we don’t own dedicated hardware testing rigs or multiple CPUs and systems to offer all of the benchmarks and comparisons you’d typically find in CPU reviews. We’re going to recommend Eurogamer’s Digital Foundry, Tom’s Hardware, and PC Gamer for those.

I’ve tested a variety of workloads, synthetic benchmarks, and games across both AMD’s Ryzen 9 7900X and Intel’s Core i9 12900K. All tests were run on the latest Windows 11 2022 Update with VBS security off and Resizable BAR enabled.

AMD’s Ryzen 9 7900X wipes the floor with Intel’s Core i9 12900K in most of the creator tasks I threw at it. The only exception was PugetBench for Premiere Pro, where Intel holds a clear advantage. I didn’t see that video processing advantage in tests of our own standard video export test that we use at The Verge, though. We export a five-minute 4K video using Adobe Premiere Pro. This completed in three minutes and 14 seconds on the 7900X, exactly the same as the 12900K.

The introduction of a single PCIe 5.0 M.2 slot on the MSI Meg X670E will sit unused until these drives are available, but it’s great future proofing, as they should hit the market before the end of the year. Still, only the most demanding of workloads will require PCIe 5.0 storage, and we’re still waiting for DirectStorage games to appear in Windows 11 that really take advantage of current-gen PCIe 4.0 drives.

So, AMD has solid boosts for creator tasks with its Ryzen 9 7900X and a slight gaming advantage. The real question is how long this will hold. Intel’s 12900K is nearly a year old, and AMD’s Ryzen 7 5800X3D already held its own against it in gaming tasks. Intel is expected to unveil its 13900K tomorrow. The timing is impeccable, but it’s worth noting that none of the Ryzen 7000 chips use AMD’s new 3D-stacking V-Cache technology like the Ryzen 7 5800X3D did, so there could be potential for a 7900X3D down the line to really take the gaming performance crown again.

Intel’s response will come in the form of a processor capable of boosting up to 6GHz, but pricing and energy usage will be key. Intel announced earlier this year that it will raise the prices on its flagship CPUs, so we could be looking at a battle for your wallet as much as a battle for performance in the coming months. AMD is certainly back to challenge Intel with its next-gen Zen 4 architecture, but this year’s CPU battle has only just begun.

The gang’s all back in Clerks III’s first trailer

Elon Musk could cut half of Twitter’s workforce