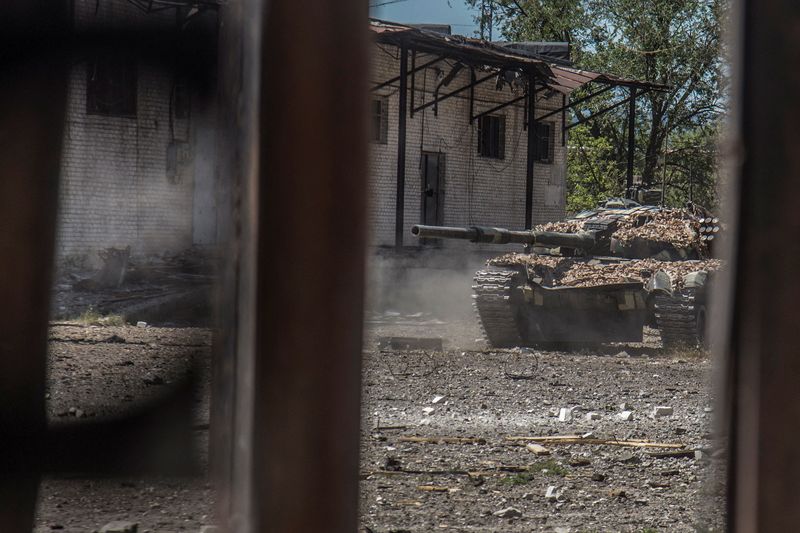 © Reuters. FILE PHOTO: A tank of the Ukrainian Armed Forces its seen in the industrial area of the city of Sievierodonetsk, as Russia’s attack on Ukraine continues, Ukraine June 20, 2022. Picture taken June 20, 2022. REUTERS/Oleksandr Ratushniak

KYIV (Reuters) – It took Russia weeks of fierce fighting, an untold number of casualties, and relentless shelling before the exhausted Ukrainian defenders of Sievierodonetsk received orders to quit its smouldering wreckage.

“Remaining in positions smashed to pieces over many months just for the sake of staying there does not make sense,” Serhiy Gaidai, governor of the wider region, said on Ukrainian television on Friday.

With a reported 90% of the industrial city’s buildings damaged, most of its around 100,000 residents long gone, and with limited strategic value beyond a sprawling chemicals plant, it does not look like much of a prize.

But its capture, if and when officially confirmed, is likely to be hailed by Russia as evidence that its switch from its early and unsuccessful attempts at “lightning warfare” to a much slower grinding offensive which relies more on long-range shelling rather than close-quarters combat, is paying off.

Sievierodonetsk would be the biggest Ukrainian city Russia has captured since it took the port of Mariupol last month.

“Our military has changed tactics,” said one Russian government official.

“They know how to do it now. Yes it’s slow, but the strategy works and it means far less casualties,” said the official, who declined to be named because they were not authorised to speak on the subject.

“Whatever they did, it is working for them,” said Muzyka.

“Another thing is we don’t know what’s going on with the Ukrainians; their manpower, losses and so on. From their point of view officially, everything is rosy. But it certainly is not this way.”

Moscow calls its invasion, which began on Feb. 24, a “special military operation” to liberate territory controlled by Ukrainian nationalists whom it says are hostile to Russian speakers and intent on taking Kyiv into NATO, a move Russia says it cannot accept.

The West and Ukraine accuse Russia of waging an unjustified war of aggression designed to halt Kyiv’s legitimate westwards drift and accuse the Kremlin of trying to recreate parts of the Russian Empire.

The fall of Sievierodonetsk would leave only one other major settlement in Ukraine’s Luhansk region outside the control of Russia and its proxies – the nearby twin city of Lysychansk, which lies across the Siverskyi Donets River and on high ground, making it harder to overwhelm.

Luhansk is one of two regions which make up the wider Donbas area whose capture by Russian forces on behalf of proxy separatists is framed by Moscow as one of its main aims.

Ukrainian analysts say Kyiv is forcing Russia to pay a high price for its creeping progress.

The length of time Sievierodonetsk’s defenders held out slowed Russian efforts elsewhere and sucked up Moscow’s finite resources, they say.

“Our forces had to withdraw and conduct a tactical retreat because there was essentially nothing left there to defend,” said Oleksander Musiyenko, a Kyiv-based military analyst.

“There was no city left there and, secondly, we could not allow them (Ukrainian forces) to be encircled. Everything could be a lot worse if Russia’s troops had been able to take Sievierodonetsk in the space of a day three weeks ago,” he said.

One Moscow-based military analyst who declined to be named, citing Russia’s wartime censorship laws, compared the fighting around Sievierodonetsk to World War One, saying Russian forces had advanced only around 100 metres a day for the last month.

Russia’s aims at this point in the conflict were less about gaining territory, he suggested, and more about inflicting maximum casualties.

“Russia’s strategy is a First World War approach of breaking your opponents. It could work – there is some evidence that Ukrainian morale is a problem,” said the analyst.

If, as seems likely, Russia continues with the same tactics, its offensive against Ukraine, which says it has just taken delivery of new long-range U.S. weapons designed to help it dual with Russian artillery, could be protracted.

Russia still faces major obstacles in its campaign to control Donbas as Ukraine still controls almost half of the Donetsk region, the other region it is targeting, including the heavily fortified cities of Sloviansk and Kramatorsk, both of which are larger than Sievierodonetsk.

Russia’s attention is now likely to turn swiftly to the city of Lysychansk across the river where Ukrainian forces have heavily fortified positions, the last major part of the Luhansk region it does not control.

“We have to understand that they (Russia) will probably try to attack the city from two or three sides,” said Musiyenko.