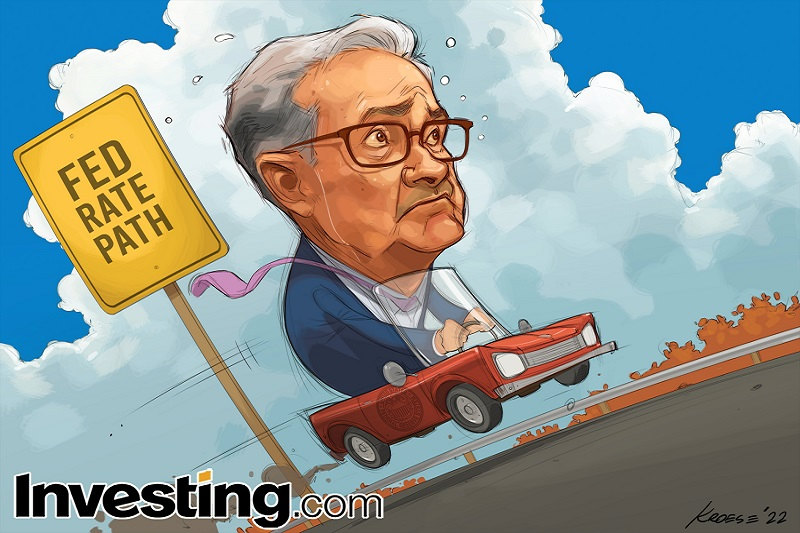 Investing.com — This week’s Fed experience was the parent’s road trip at its most depressingly banal: kids in the back, annoying you, winding up each other, and generally getting more and more peevish every time you answer the question “Are we nearly there yet?”

“Waaaaah! This is booooring!!”

“Maybe, son, but whining about it doesn’t get us there any quicker.”

For those who want to see an end to Fed tightening, the signs are getting clearer by the day. Disinflation is spreading from the most interest-rate sensitive sectors of the economy, such as real estate, while prices for goods – especially durables – are weakening as supply chain bottlenecks become a thing of the past.

Secondly, there are increasingly clear signs that the labor market is starting to cool off. The days of two vacancies for every unemployed person are as good as over, as even the likes of Amazon (NASDAQ:) pause corporate hiring, while its weaker brethren in the technology sector, from Facebook owner Meta Platforms (NASDAQ:) to Stripe and Coinbase (NASDAQ:), lay people off in ever-larger numbers.

The October – while still containing some ambiguities – confirmed a broadening slowdown: Payroll gains were limited to a narrower subset of sectors, while the rose. Overall job growth has clearly slowed over recent months: Greg Daco, chief economist with EY, noted that at 289,000, the three-month average of job gains is now at its slowest in nearly two years. growth, at 4.7% year-on-year, is likewise the weakest since August 2021.

Additionally, base effects are soon going to become the inflation dove’s friend: the rally that saw prices nearly double from $63 started early last December. Before spring arrives, the statisticians will be using a price of $90 as their year-earlier comparison. Purely from a mechanical point of view, it’s hard to see crude prices doubling again from that level. Yet they will most likely stay at a level that keeps discretionary spending under pressure.

So surely the day when the Fed stops hiking is coming closer?

It remains a fact that inflation is regularly surprising to the upside, not just in the U.S. but in Europe, too. Economists – including those at central banks – still appear to be structurally underestimating the strength of price pressures, for reasons that they still have not clearly articulated. Cynics would say that the chief cause is neither energy prices nor supply chain disruptions but a decade of excess money creation, a hard thing for central bankers to admit given that they have to take sole responsibility for it.

As long as this underestimation remains the case, then talk of a pivot will remain premature.

Then there are the longer-term consequences of deglobalization to consider. As has been argued before, a world in which population ageing is crimping the supply of labor to service-driven economies, a world where cheap Chinese labor and cheap Russian energy are being shunned for political reasons (however legitimate), a world where money creation has run ahead of productivity growth for years – this world is going to be prone to higher inflation than thought, for longer than thought, even allowing for cyclical downturns.

At the end of a week of a hawkish Fed and a rather dovish jobs report, the market still thinks that interest rates have at least 1 percentage point further to rise, before plateauing by spring 2023, and that is unlikely to be too pessimistic an assessment. The risks may have shifted slightly in the doves’ favor with Friday’s numbers, but this remains a cycle unlike any since the end of the Cold War. It’s still a long road ahead, and one with plenty of twists, too.