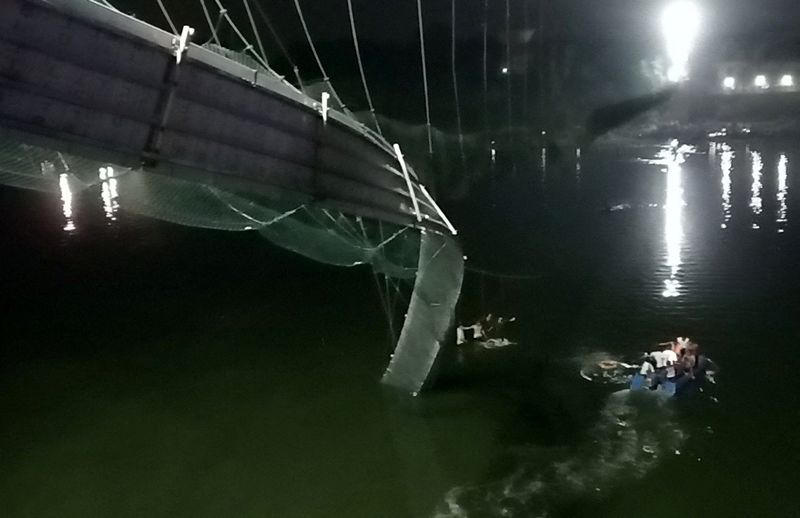 © Reuters. A view shows a damaged part of a suspension bridge after it collapsed in Morbi town in the western state of Gujarat, India, October 30, 2022. REUTERS/Stringer

AHMEDABAD, India (Reuters) – At least 68 people were killed when a pedestrian bridge over a river in the western Indian state of Gujarat collapsed on Sunday, plunging hundreds of people into the water, officials said.

Authorities said more than 400 people were in and around the suspension bridge over the Machhu River in the town of Morbi at the time of the collapse on Sunday evening.

TV footage showed dozens of people clinging onto the cables and twisted remains of the collapsed bridge as emergency teams struggled to rescue them. Some clambered up the broken structure to try to make their way to the river banks, while others swam to safety.

“The death toll is 68,” NK Muchhar, a senior official in Morbi, told Reuters.

At least 30 people had also been injured, other officials said.

State Home Minister Harsh Sanghavi said more than 150 people were on the narrow cable-stayed bridge, a tourist attraction that drew many sight-seers during the festive season, when Diwali and Chhath Puja are celebrated.

The 230-metre historic bridge was built during British rule in the 19th century. It had been closed for renovation for six months and was reopened for the public last week.

Prime Minister Narendra Modi, who is in his home state Gujarat for a three-day visit, said he had directed the state chief minister to mobilise teams urgently for the rescue operation.

Fifty navy and 30 air force officials were pressed into action along with national disaster management team to trace missing people, the government said in a statement. A five-member special team was appointed to conduct an investigation into the disaster.

Morbi is one of the largest ceramic manufacturing clusters in the world and accounts for more than 80% of India’s ceramic output.

The incident comes ahead of elections in Gujarat, which are expected to be held by the year-end with the current term of the Modi’s ruling party’s term ending in February, 2023.

Israel stocks higher at close of trade; TA 35 up 0.91% By Investing.com