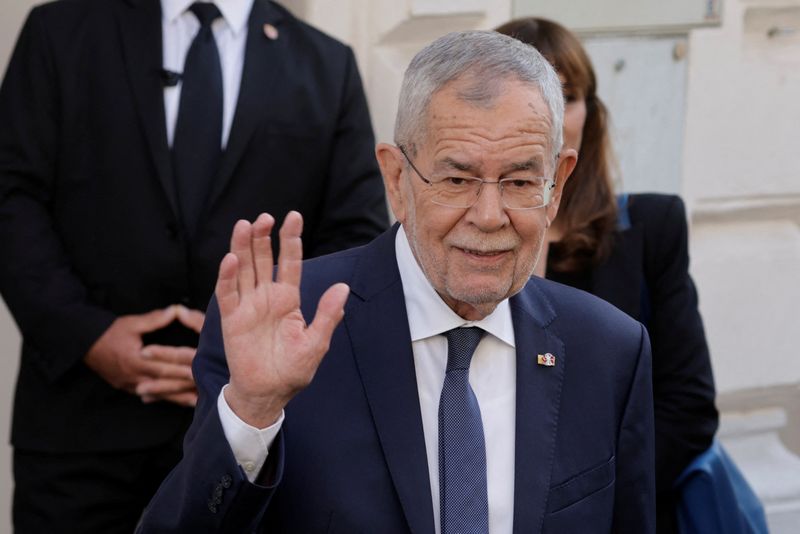 VIENNA (Reuters) -Austrian President Alexander Van der Bellen secured a second six-year term in office by winning more than 50% of the vote in an election on Sunday to avoid a runoff, according to initial projections issued soon after voting closed.

Neither of the main centrist parties fielded candidates in the election, and senior figures from both backed Van der Bellen, a 78-year-old former leader of the Greens. The far-right Freedom Party was the only party in parliament to put forward a candidate against the president.

A projection by pollster SORA for national broadcaster ORF, based on a partial count of 64.8% of votes, put Van der Bellen on 55.4% with a margin of error of 1.9 percentage points. His nearest rival was the Freedom Party’s Walter Rosenkranz on 18.4%.

Initial projections in Austria, based on the count from the polling stations that closed earlier in the day, have proved reliable in the past. The last polling stations to close include those in the cities of Vienna and Innsbruck.

A separate projection by ARGE Wahlen for national news agency APA put Van der Bellen on 55.9% and Rosenkranz on 17.9%, based on 62% of votes counted.

The Austrian president largely performs a ceremonial role, but also has sweeping powers that mean overseeing periods of transition and turbulence. Van der Bellen has built up a reputation for having a steady hand and calm manner, particularly in times of crisis.