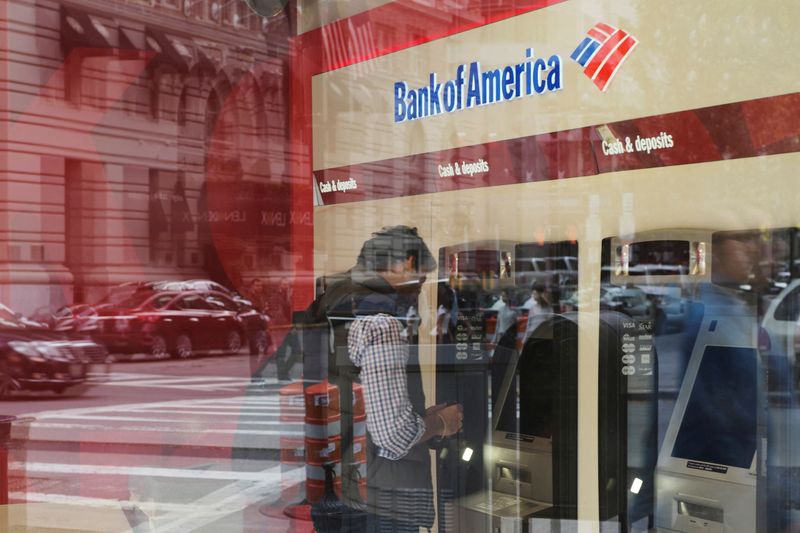 By Mehnaz Yasmin and Manya Saini

(Reuters) – Bank of America Corp (NYSE:) on Monday reported a smaller-than-expected 9% drop in quarterly profit, as its interest income was bolstered by rising interest rates that offset a slump in investment banking.

The U.S. Federal Reserve’s aggressive move to tighten monetary policy this year to tame inflation has boosted the amount that banks can earn from charging interest on loans to consumers and businesses.

BofA holds a large base of consumer deposits, compared with its main rivals, making it more sensitive to any changes in interest rates.

“Consumers continue to spend at strong levels,” with spending up 10% in October from the previous year, and they are also sitting on a mountain of deposits and repaying their credit cards, he added.

Excluding items, BofA earned 81 cents per share for the quarter ended Sept. 30, beating the average analyst estimate of 77 cents per share, according to Refinitiv IBES data.

The earnings were a “nice beat,” wrote Chris Kotowski, an analyst at Oppenheimer. “The results demonstrate the power of having a strong U.S. branch network.”

“BofA benefited from a higher interest rate environment in both the yields on the newly issued loans and just the growth of number of depositors,” said Siddharth Singhai, chief investment officer of New York-based investment firm Ironhold Capital.

The second-largest U.S. bank’s consumer business reported a 12% jump in revenue, helped by higher balances and a rise in interest rates and a 9% jump in combined credit and debit card spend.

The bank, however, added $378 million to its loan-loss reserves as it braces for a weakening economy. That compares with a reserve release of $1.1 billion a year earlier.

Its global wealth and investment management segment reported a 2% rise in revenue as average loans and leases grew in the quarter.

Investment banking fees at BofA fell 46% as growing concern about an economic slowdown weighed on dealmaking. That echoed results across Wall Street, where fees retreated from last year’s records after demand dried up for public listings and buyouts. Chief Financial Officer Alastair Borthwick said on a media call that the bank was satisfied with its headcount for now and was not planning to cut jobs in the investment banking unit despite a downturn in its underwriting business.

The lender joins Wall Street rivals in adding staff in the third quarter. JPMorgan’s headcount swelled 9% versus the previous year, Citigroup’s rose 8% and Morgan Stanley (NYSE:)’s was up 11%. Wells Fargo bucked the trend, trimming staff by 6%.

Bank of America managed to retain its top spot in global leveraged finance this year even as deal volumes in the sector shrank by a quarter to $1.4 trillion, according to data from Dealogic.

It was among the consortium of lenders that took $700 million of losses financing the buyout of Citrix Systems Inc (NASDAQ:) as well as canceled efforts to sell debt that financed Apollo Global management Inc’s deal to buy assets from Lumen Technologies Inc.

Bank of America Clients are Selling This Rally By Investing.com