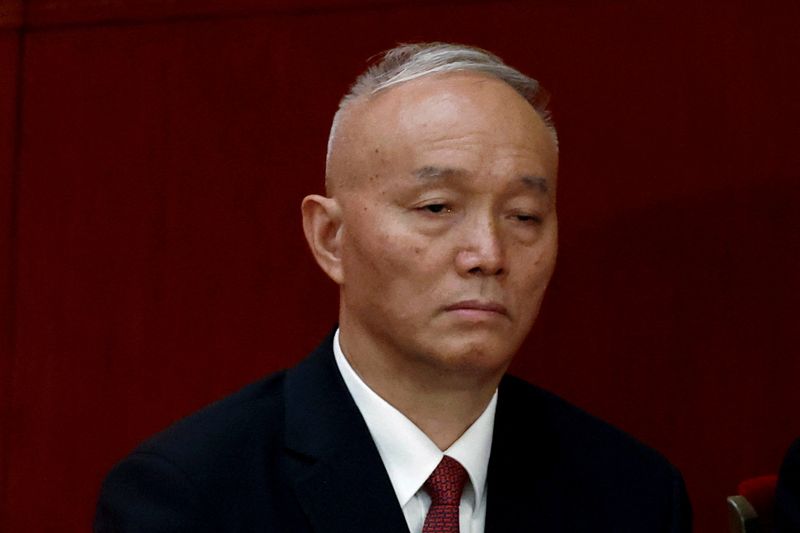 Cai, 66, was not on everyone’s list for the elite Politburo Standing Committee, but he is seen as one of Xi’s closest political allies, having worked with him for 20 years in the coastal provinces of Fujian and Zhejiang.

His leap to the party’s top governing body was reminiscent of a jump in 2017 into the Politburo without the typical first stop on the larger Central Committee.

China’s most powerful ruler since Mao Zedong, Xi stacked the seven-man Politburo Standing Committee with allies, leaving out prominent reform-minded officials, including Hu Chunhua, Wang Yang, and outgoing Premier Li Keqiang. They were seen by some party watchers to be in contention for a seat.

Promoted despite facing difficulties in leading China’s capital, Cai is much like another Xi ally elevated to the Standing Committee, Shanghai Party Secretary Li Qiang. Li, the likely next premier, faced widespread public anger at a botched COVID-19 lockdown this year.

Cai and Li on Sunday joined a long list of Shanghai and Beijing Party bosses that have been promoted to the Standing Committee.

Cai was promoted in 2014 to general office deputy director at the Beijing-based National Security Commission, a body founded and chaired by Xi. A year later, he was promoted to ministerial rank, becoming Beijing’s mayor the year after.

He joined the Politburo in 2017, when he was named Beijing’s party secretary.

“The fact that Cai was promoted four times over (those) four years suggests his importance to Xi Jinping,” said Cheng Li, an expert on Chinese politics at the Brookings Institution.

Now, analysts say Cai is likely to head the Party’s Central Secretariat, the body responsible for the Politburo’s routine operations.

Neil Thomas, a senior analyst for China and Northeast Asia at the Eurasia Group, said that besides Cai, only one other Xi ally, Yang Xiaodu, was “helicoptered” from outside the Central Committee straight into the Politburo in 2017, a promotion last seen in 1992.

In 2017, just weeks after the 19th Party Congress, Cai faced loud public criticism over the forced eviction of migrant workers on Beijing’s outskirts. Images of demolished homes circulated online with leaked videos showing Cai saying the operation should be a “cut-and-thrust and tough confrontation”.

Cai weathered the storm, adjusting his public tone towards the residents affected by the crackdown.

Using a title previously only used by Mao’s propagandists to refer to the founder of the People’s Republic, Cai told the Beijing delegation during last week’s party congress: “General Secretary Xi Jinping leads the path for all people in the party and country in the new era. He is the people’s leader whom we sincerely love and admire.”

Unlike most top-level party officials, Cai was once an adept user of social media, garnering over 10 million followers on China’s Twitter-like Weibo (NASDAQ:) while working in Zhejiang province.

He broke with convention in 2014, announcing his promotion to the Xi-led National Security Commission before state media reported the news, according to the official China Daily.

Despite making a mark for engaging frankly with citizens, even helping a few solve problems they raised on his Weibo account, Cai stopped posting after moving to Beijing.

In 2011, Cai praised Facebook (NASDAQ:) and lamented that it was blocked in China. He has said officials needed to get used to public supervision when explaining why he was so active on social media, according to China Daily.

A decade later, during a Beijing Party committee meeting on cyberspace and ideology hosted by Cai, no mention was made of citizens using social media to hold officials accountable.

Instead, the meeting said the capital would focus on promoting “positive energy” online.

10 Awesome Songs about Giving Up

Yellen says U.S. economy stronger than before pandemic but inflation a threat By Reuters