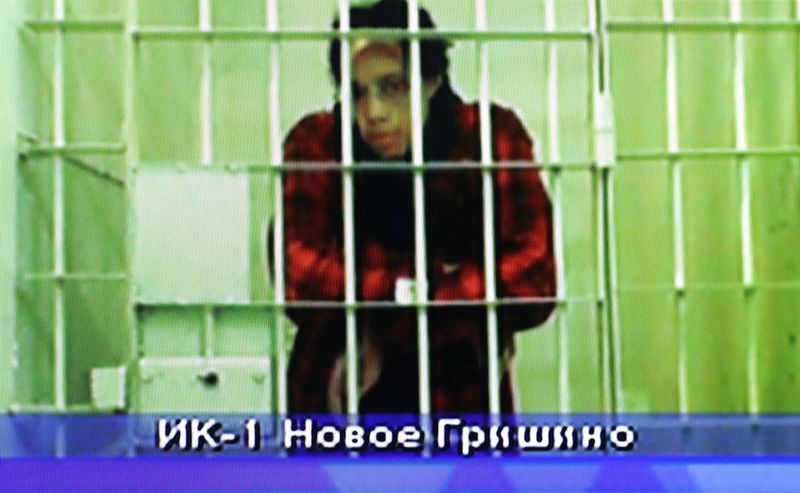 © Reuters. FILE PHOTO: U.S. basketball player Brittney Griner appears on a screen via video link from the detention centre before a court hearing to consider an appeal against her prison sentence, in Krasnogorsk, Moscow Region, Russia October 25, 2022. REUTERS/Evgen

“My hope is, now that the election is over, that Mr. Putin will be able to discuss with us and be willing to talk more seriously about prisoner exchange,” Biden told reporters at a press conference.

“My intention is to get her home,” he added.

Biden’s Democratic Party performed better than expected in the Nov. 8 midterms, with the Republicans appearing to fall short of the sweeping “red wave” victory they had sought.

The Biden administration in late July proposed a prisoner swap with Russia to secure Griner’s release, as well as that of former U.S. Marine Paul Whelan who is also jailed there, but said Moscow had yet to respond positively.

Griner, 32, a star of the Women’s National Basketball Association’s Phoenix Mercury, was arrested on Feb. 17. Russia’s Feb. 24 invasion of Ukraine and the subsequent souring of ties between Washington and Moscow have complicated the talks.

The two-time Olympic gold medallist was arrested at a Moscow airport when vape cartridges containing cannabis oil, which is banned in Russia, were found in her luggage.

She was sentenced on Aug. 4 to nine years in a penal colony on charges of possessing and smuggling drugs. She had pleaded guilty, but said she had made an “honest mistake” and had not meant to break the law.

Last week, Russian authorities transferred Griner from a detention center outside Moscow and she is now on her way to an undisclosed penal colony, her legal team said on Wednesday. The move drew anger from the Biden administration.

U.S. Secretary of State Antony Blinken in a statement said Griner was being transferred to a “remote penal colony” and that the United States expects Russian authorities to provide its embassy officials with access to Griner and other Americans detained in Russia.

The WNBA, in a statement, said it was “crushed” by the move, calling it a “scary, seemingly never-ending nightmare,” adding “the lack of clarity and transparency in the process compounds the pain.”

Neither her current location nor her final destination are known, her legal team said and added that in line with Russian procedures, her attorneys and the U.S. Embassy should be notified upon her arrival, but that it would take up to two weeks for that to happen.

Russia did not notify the United States that Griner was being moved, according to a senior State Department official, who spoke on condition of anonymity.

Reuters has requested comment from Russia’s federal prison service on where Griner is being taken and where she is now.

Transfers to penal colonies can be time-consuming as groups of prisoners are assembled and moved to different locations across the world’s largest country.

Russia has refused to comment on the state of negotiations, saying such diplomacy should not be conducted in public.

“Despite a lack of good-faith negotiation by the Russians, the U.S. government has continued to follow up on that offer and propose alternative potential ways forward with the Russians through all available channels,” White House spokeswoman Karinne Jean-Pierre said.

Discussions over the proposed swap have “not been a static process,” the senior State Department official added.

Griner’s lawyers have not yet said if they will attempt a further appeal against her conviction after a Russian court rejected an attempted appeal on Oct. 25.

“Our primary concern continues to be BG’s health and well-being,” Griner’s agent, Lindsay (NYSE:) Colas, said in a separate statement, referring to the player by her initials.

“As we work through this very difficult phase of not knowing exactly where BG is or how she is doing, we ask for the public’s support in continuing to write letters and express their love and care for her,” Colas said.

The Return of Cartography – War on the Rocks