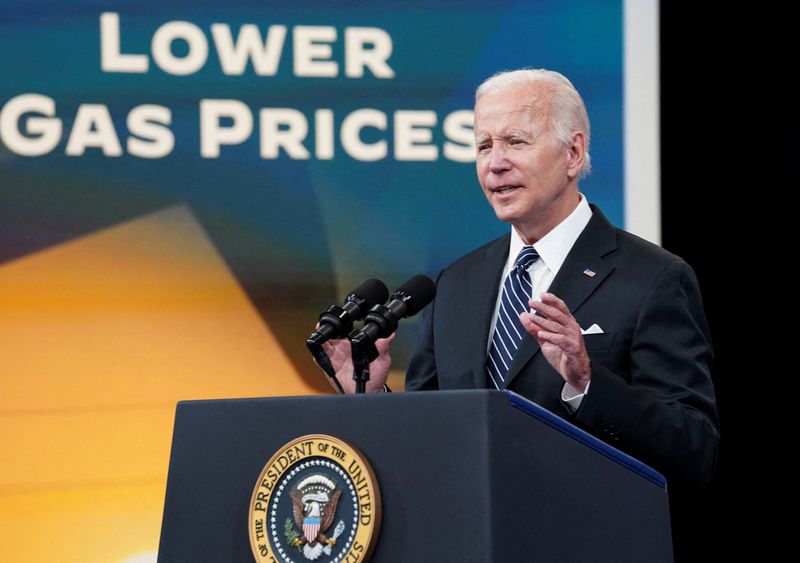 By Jarrett Renshaw and Steve Holland

WASHINGTON (Reuters) – U.S. President Joe Biden will announce a plan on Wednesday to sell off the last portion of his release from the nation’s emergency oil reserve by year’s end and detail a strategy to refill the stockpile when prices drop, administration officials said.

The plan is intended to add enough supply to prevent oil price spikes that could hurt consumers and businesses, while also assuring U.S. drillers that the government will swoop into the market as a buyer if prices plunge too low.

Biden’s efforts to use federal powers to balance the U.S. oil market underscores just how much the war in Ukraine, rampant inflation and a recent Saudi-backed OPEC production cut have upended the plans of a president who came into office vowing to undo the oil industry and move the country swiftly to a fossil-fuel free future.

It also reflects the administration’s desire to keep inflation in check, particularly in the weeks before November congressional elections in which Biden’s fellow Democrats hope to retain control of Congress.

U.S. presidents have little control over petroleum prices, but the country’s massive gasoline consumption – the highest in the world – means high prices at the pump can be political poison. Retail gasoline prices have fallen from a high in June, but remain above historical averages.

Earlier this year, Biden decided to sell 180 million barrels out of the Strategic Petroleum Reserve (SPR) to combat a potential supply crisis brought about by sanctions on oil-rich Russia following its February invasion of Ukraine.

While the initial plan was to end those sales in November, purchases by companies, including Marathon Petroleum Corp (NYSE:), Exxon Mobil Corp (NYSE:) and Valero Energy Corp (NYSE:), were slower than expected over the summer and some 15 million barrels remain unsold.

Those will be put up for bidding for delivery in December, a senior administration official said, and extra oil could also be made available if needed.

“The president’s also going to be announcing that we are going to replenish the SPR,” Hochstein said in an interview with CNN.

Biden will lay out a plan to refill the emergency reserve in the upcoming years, but only at prices at or below a range of $67 to $72 dollars a barrel for West Texas Intermediate , the U.S. oil benchmark, the senior administration official said.

Biden’s hope is to send a signal to both consumers and producers.

“He is calling on the private sector in the United States to do two things. One is take this signal and increase production, increase the investment, and No. 2 is to make sure that as they are taking these profits, as they are benefiting from these markets, that they are continuing to give the consumer the appropriate price,” the official said.

In recent weeks, the oil industry has grown increasingly concerned the administration might take the drastic step of banning or limiting exports of gasoline or diesel to help build back sagging U.S. inventories. They have called on the administration to take the option off the table, a move officials are unwilling to do.

“We are keeping all tools on the table, you know, anything that could potentially help ensure stable domestic supply,” the official said.

Ghana, IMF in talks over rescue package By Reuters