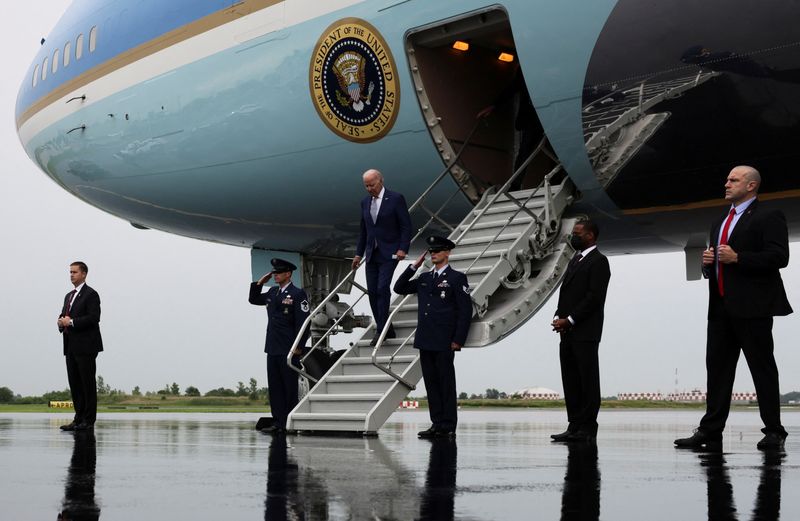 By Jarrett Renshaw and Nandita Bose

(Reuters) -U.S. President Joe Biden will meet Saudi Crown Prince Mohammed bin Salman, the defacto leader of a country he once called a “pariah,” during a trip to the Middle East in July, as Washington seeks ways to lower U.S. gasoline prices.

Since Biden took office, Saudi-U.S. relations have been under strain over the Saudi human rights record and in particular the killing and dismembering of Washington Post journalist Jamal Khashoggi in Turkey in 2018. U.S. intelligence implicated the prince in the murder. The Saudi government has denied any involvement by him.

Biden’s predecessor Donald Trump had a close relationship with the prince. But while a presidential candidate in 2019, Biden pledged to make Saudi Arabia “pay the price, and make them, in fact, the pariah that they are” over the killing of Khashoggi. The White House has said, as recently as this month, that Biden’s view has not changed.

A senior U.S. official, speaking on condition of anonymity, said on Tuesday that if Biden “determines it’s in his interest to engage with any particular leader, and if such an engagement can deliver results, then he will do so.”

The official pointed to the crown prince’s role in helping secure an extension of a U.N.-brokered truce between Yemen’s warring parties as an example of what he said was a need to engage with Saudi Arabia as way to help bring peace and security to the region.

Biden’s July 15-16 visit to the kingdom comes after the OPEC+ group of oil-producing nations, led by Saudi Arabia, agreed to boost oil production to offset Russian losses – following Western sanctions on Moscow over its invasion of Ukraine – and combat surging oil prices and inflation.

Biden will travel to Israel on July 13-14. Israel’s defense minister said on Tuesday that Israel and Arab countries that share its worries about Iran should build up their military capabilities under Washington’s aegis.

In Israel, Biden will emphasize the U.S. commitment to the country, which includes billions of dollars in military support, the senior U.S. official said. He will also hold a virtual summit with the leaders of Israel, India, and the United Arab Emirates.

Biden will also travel to the West Bank to meet with Palestinian President Mahmoud Abbas and other leaders to reaffirm his commitment to a two-state solution between Israel and Palestine, the U.S. official said.

What Artillery and Air Defense Does Ukraine Need Now?

U.S. Stocks Turn Lower to Start Week Ahead of New Data By Investing.com