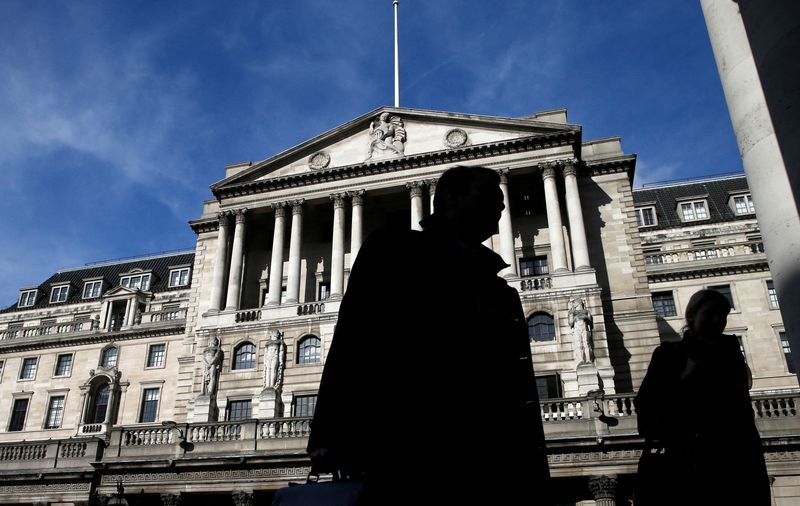 (Reuters) – The Bank of England will raise interest rates in June by a modest 25 basis points and stick to those increments in coming meetings despite inflation running close to double-digits, a Reuters poll of economists found.

But even with the threat of recession – the economy unexpectedly shrank 0.3% in April – the BoE still looks set to take Bank Rate 25 basis points higher by year-end than thought just one month ago.

Its pace of rate rises remains significantly slower than its peers, including the U.S. Federal Reserve and the Bank of Canada, which have raised rates by 50 basis points in recent meetings and are set to do more. [ECILT/US] [ECILT/CA]

The June 6-10 poll showed all but one of 56 economists expected the BoE to deliver a quarter-point hike on June 16 to 1.25%, its fifth consecutive rate rise. Two more are expected this year to 1.75%, compared with just one in the May poll.

Roughly two-thirds, 36 of 56 economists, see the next 25 basis point hike to 1.50% in the third quarter, which would most likely come at the August meeting with the next round of quarterly BoE forecasts. Around one-third see rates at 1.75% by-end September, suggesting back-to-back 25 basis point rises.

The BoE will pause through the first quarter of next year, with one more rise to 2.0% in Q2 2023, poll medians show.

The BoE was the first among major central banks to start hiking interest rates, in December last year, which has afforded policymakers some room on the pace of rate increases.

More than two-thirds of respondents, 37 of 56, now see Bank Rate at 1.75% or higher by year-end compared to just over one-third in the May poll.

“In my opinion, there is much less scope for rate increases in the UK than there is across the Atlantic and it will be very difficult for the Bank of England to live up to current market expectations without inflicting an even harder recession on the UK,” said Stefan Koopman, senior macro strategist at Rabobank.

Interest rate futures see Bank Rate ending the year closer to where economists say the U.S. fed funds rate will be, around 2.50-2.75%.[ECILT/US]

Only one contributor, Capital Economics, expected an aggressive 50 basis point BoE rate rise in June. Last month, three members of the Monetary Policy Committee voted for such a large rise but it is unlikely to find a majority.

“We doubt that the MPC will opt to follow this path,” noted Philip Shaw, chief economist at Investec.

“Indeed since its inception in 1997, the committee has not raised rates by any more than 25bps in a single step. But bearing in mind the direction of travel elsewhere we cannot rule this policy option out completely.”

When asked, 19 of 22 economists said Bank Rate was more likely to end the year higher than they currently expect rather than the opposite.

Inflation is at a 40-year high of 9.0% and set to exceed 10% later this year, worsening a cost of living crisis not seen in three decades.

It is set to average 8.9% this quarter, more than four times the BoE’s 2.0% target and remain close to that level at year-end the poll showed. It is forecast to ease gradually next year, but won’t approach target until the tail-end of 2023.

Economists replying to an extra question said there was a median 35% chance of recession within a year. But no respondent had two consecutive quarters of contraction this year in their forecasts, the technical definition of recession.

The economy is forecast to grow 3.7% on average during 2022 and then expand 1.2% next year, median forecasts of over 60 economists showed.

(For other stories from the Reuters global economic poll:)

Google suspends engineer who claims its AI is sentient

The Most Dangerous Phase for Ukraine?