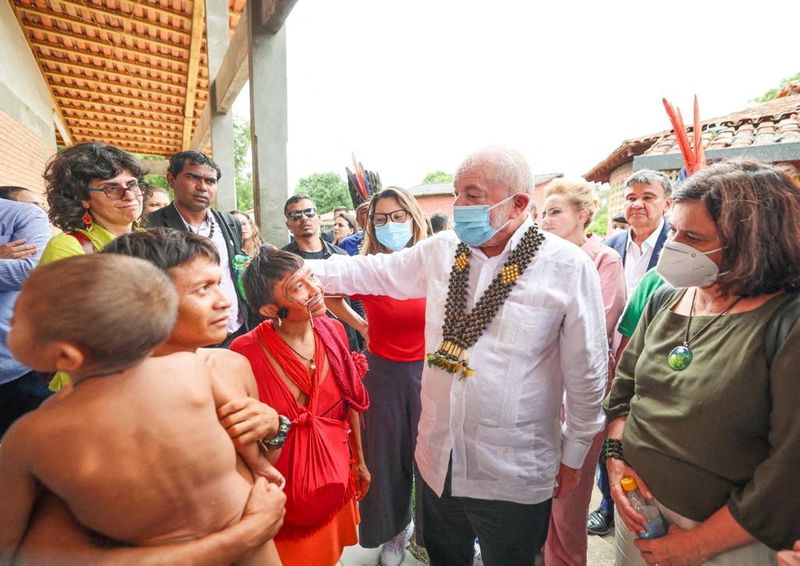 BRASILIA (Reuters) – Brazil’s military should evict illegal gold miners who have caused malnutrition and starvation in a region of the Yanomami reservation near the Venezuelan border, Indigenous Health Secretary Weibe Tapeba said on Tuesday, urging

“It looks like a concentration camp,” Tapeba, a doctor appointed to the position by Brazil’s new government, said in a radio interview.

Tapeba said 700 members of the community were going hungry and healthcare is non-existent due to presence of well-armed gold miners that scared away medical workers from the health post and block people from bringing in supplies of medicine and food.

Brazil’s ministry of health on Friday declared a medical emergency in the Yanomami territory, the country’s largest indigenous reservation, following reports of children dying of malnutrition and other diseases brought by gold mining.

“It’s an extreme calamity, many Yanomami are suffering from malnutrition and there is a total absence of the Brazilian state,” Tapeba said.

An invasion by more than 20,000 wildcat gold miners has contaminated the rivers with mercury that has poisoned the fish the Yanomami eat he said, citing children with their hair falling out due to the mercury used to separate gold from ore.

“Health teams cannot get here because of the heavily armed bandits. This can only be resolved by removing the gold miners and that can only be done by the armed forces,” he said.

Brazil’s Supreme Court ordered the removal of the gold miners. But the previous government of far-right President Jair Bolsonaro never complied. Yanomami leaders said their pleas for help were ignored.

In four years of Bolsonaro’s presidency, 570 Yanomami children died of curable diseases, mainly malnutrition but also malaria, diarrhea and malformations caused by the mercury in the rivers, the Amazon (NASDAQ:) journalism platform Sumauma reported, citing data obtained by a FOIA.

The reservation has been invaded by illegal gold miners for decades, but the incursions multiplied since Bolsonaro won office in 2018 promising to allow mining on previously protected indigenous lands and offering to legalize wildcat mining.

Justice Minister Flavio Dino said on Monday that there was “evidence of genocide” that is being investigated.

In December, Survival International warned about the extent of the crisis, citing a study by UNICEF and Brazil’s FioCruz biomedical research center that found that 8 out of 10 Yanomami had chronic malnutrition, and deaths from preventable diseases among children under five were 13 times the national average.

“The Yanomami rarely suffer from malnutrition in normal circumstances. Their forests are bountiful and they are experts at growing, gathering and hunting everything they need, and they enjoy excellent health,” said Survival International director Fiona Watson in a statement.

“This is a deliberate, man-made crisis, stoked by President Bolsonaro, who has encouraged the mass invasion and destruction of the Yanomami’s lands,” she said.