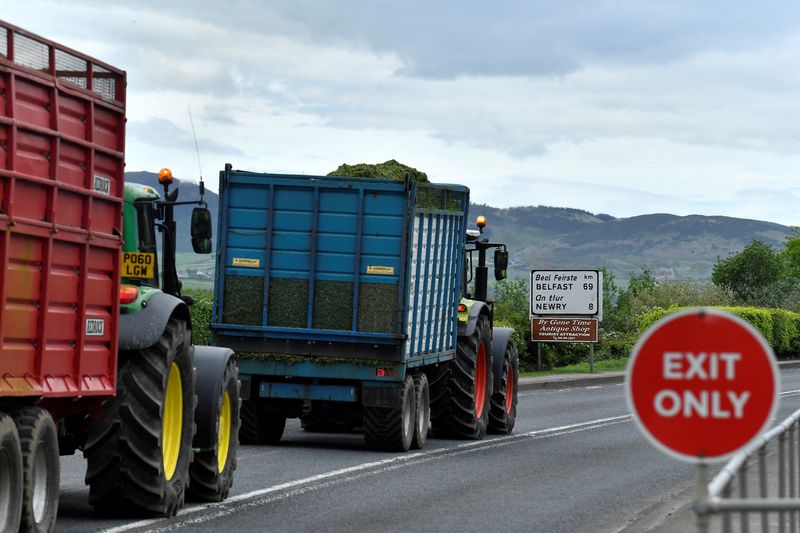 © Reuters. FILE PHOTO: Tractors drive past an exit sign and a road sign for Belfast on the border between Northern Ireland and Ireland, in Jonesborough, Northern Ireland, May 19, 2022. REUTERS/Clodagh Kilcoyne/File Photo

By Elizabeth Piper and Kate Holton

LONDON (Reuters) -Britain published plans on Monday to override some of the post-Brexit trade rules for Northern Ireland by scrapping checks and challenging the role played by the European Union’s court in a new clash with Brussels.

Despite Ireland describing the move as a “new low” and Brussels talking of damaged trust, Britain pressed ahead with what Prime Minister Boris Johnson suggested were “relatively trivial” steps to improve trade and reduce bureaucracy.

European Commission Vice President Maros Sefcovic said that Brussels’ reaction would be proportionate, but ruled out renegotiating the trade protocol.

Tensions have been simmering for months after Britain accused the bloc of heavy-handed approach to the movement of goods between Britain and Northern Ireland – checks needed to keep an open border with EU-member Ireland.

Always the toughest part of the Brexit deal, the situation in the region has sent alarm bells ringing in European capitals and Washington, and among business leaders. It has also heightened political tensions, with pro-British communities saying their place in the United Kingdom is being eroded.

“I’m very willing to negotiate with the EU, but they do have to be willing to change the terms of this agreement which are causing these very severe problems in Northern Ireland,” British Foreign Secretary Liz Truss said.

“We’re completely serious about this legislation.”

Britain has pointed to the breakdown of a power-sharing administration in Northern Ireland as a reason for drafting the legislation, the first step in what could be a months-long process before the bill becomes law.

The legal advice cited the “doctrine of necessity”, which is invoked when governments may take law-breaking action to protect stability, as the foundation for the move, saying the conditions had been met because of the situation in Northern Ireland.

Britain has long complained that negotiations with the EU have failed to come to fruition and the legislation is seen as an insurance policy, and possibly a bargaining chip. The bill could accommodate any solution agreed in those talks.

But a new trade row with the EU comes at a time when Britain faces its toughest economic conditions in decades, with inflation forecast to hit 10% and growth stalling. Johnson said any talk of a trade war would be a “gross, gross overreaction”.

The EU’s Sefcovic said the bloc will not renegotiate the protocol and called the idea “unrealistic”.

“Any renegotiation would simply bring further legal uncertainty for people and businesses in Northern Ireland,” Sefcovic said in a statement.

“Our aim will always be to secure the implementation of the Protocol. Our reaction to unilateral action by the UK will reflect that aim and will be proportionate.”

Britain has long threatened to rip up the protocol, an agreement that kept the region under some EU rules and drew an effective customs border between Northern Ireland and the rest of the UK to prevent a back door for goods to enter the EU’s vast single market.

It is now planning a “green channel” for goods moving from Britain to Northern Ireland, to change tax rules and end the European Court of Justice’s role as sole arbiter in disputes. It also wants a dual regulatory regime, angering companies which fear higher costs.

The move has yet again exposed divisions in Johnson’s Conservative Party, a week after the prime minister just survived a rebellion by his own lawmakers.

Brexit supporters said it could have gone further, critics feared it again undermined London’s standing in the world by challenging an international agreement.

Brussels believes any unilateral change may breach international law, while Irish foreign minister Simon Coveney said that only the British government thought it was not a breach.

The EU could launch legal action or eventually review the terms of the free trade deal it agreed with Britain. It has already thrown doubt on Britain’s role within the $99 billion Horizon Europe research programme.

The United States urged Britain and the EU to resolve their differences, adding that it sought to protect the 1998 peace deal for the province.

“U.S. priority remains protecting the gains of the Belfast/Good Friday Agreement, and preserving peace, stability, and prosperity for the people of Northern Ireland,” a White House spokesperson said.

The Honeytrap of Universal History: Brexit and Grand Sweeps of History and Geography

Hurricane Ian rips into Cuba, with Florida in its sights By Reuters