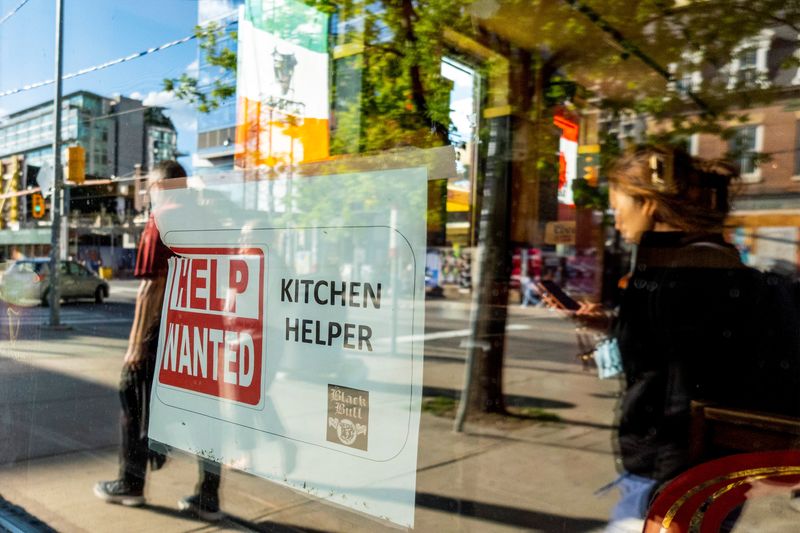 OTTAWA (Reuters) -Canada shed jobs for a third straight month in August, in a sign higher interest rates may be starting to cool the overheated economy, official data showed on Friday, though economists said it was unlikely to force a central bank pause.

The Canadian economy lost a net 39,700 jobs in August, missing analyst forecasts that it would add 15,000, Statistics Canada data showed. The jobless rate rose to 5.4%, missing calls it would edge up to 5.0% from a record low 4.9% in July.

“I think this can be taken as a reasonable indication that the economy is, in fact, slowing,” said Andrew Kelvin, chief Canada strategist at TD Securities.

“When you look at the increase in the unemployment rate, that does suggest that maybe a little bit of slack is starting to return to the labor market, though it’s not a complete process and it will be a slow process,” he added.

Canada has lost a net 113,500 jobs in the last three months. In June and July the majority of those losses were attributed to people leaving the labor force, but that trend reversed in August as 66,200 people joined the workforce.

Over those same three months, job losses were concentrated in educational services, an often volatile segment during the summer months, and wholesale and retail trade. In August, construction jobs also fell sharply.

Three straight months of job losses “hasn’t historically happened outside of a recession,” said Royce Mendes, head of Macro Strategy at Desjardins Group, adding: “The deterioration in the job market appears to be occurring faster than anticipated.”

Still, full-time employment was 3.9% higher than a year ago, Statscan said.

And wage gains continued to accelerate in August, up 5.6% on the year compared with 5.4% in July, with more people saying they were planning on leaving their current jobs in the next 12 months, citing pay and benefits as their top reason.

That wage pressure, which can fuel inflation, will likely keep the Bank of Canada in rate-hiking mode, economists said.

“I think the Bank will be more focused upon the wage side of the picture – the modest acceleration that we have there that’s ongoing,” said Derek Holt, vice president of Capital Markets Economics at Scotiabank.

Money markets pulled back from bets of a 50-basis point increase at the bank’s next decision in October after the data, leaning strongly toward 25 bps.

The Bank of Canada lifted its policy rate to 3.25% on Wednesday, its highest level in 14 years, and left the door open to more hikes amid hot inflation.

Midterms in mind, Biden to speak at Labor Day events in Wisconsin, Pennsylvania By Reuters