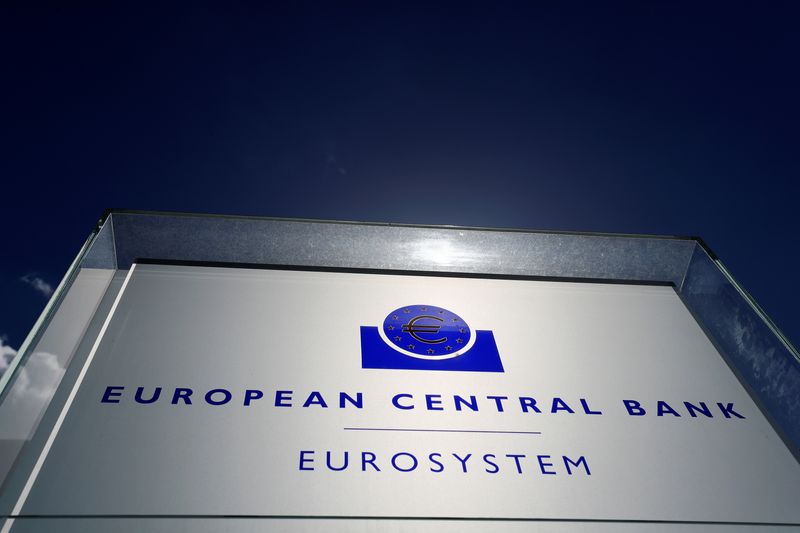 © Reuters. FILE PHOTO: The logo of the European Central Bank (ECB) is pictured outside its headquarters in Frankfurt, Germany, April 26, 2018. REUTERS/Kai Pfaffenbach

ALPBACH, Austria (Reuters) -A chorus of European Central Bank policymakers called for decisive and swift rate hikes on Tuesday to combat soaring inflation, suggesting that the choice in next week’s policy meeting will be between a big move and an even bigger one.

With inflation likely hitting 9% this month before heading towards double-digit territory on soaring gas prices, policymakers are increasingly worried that even long-term expectations may move above the ECB’s 2% target, indicating a loss of confidence in the bank’s inflation-fighting powers.

That leaves the choice for next week largely between a 50 and a 75 basis-point hike after the ECB raised the deposit rate by 50 basis points to zero last month in its first hike in over a decade.

“A swift normalization of interest rates is an essential first phase, and some front-loading should not be excluded,” Knot told a Danske Bank event. “The broadening and deepening of our inflation problem generates the need to act forcefully.”

Market futures fully price in a 50 basis-point move and high probability of a 75 basis-point hike, suggesting that the ECB could go either way.

“I think 75 basis points should be among the options for September,” Müller said. “We should not be too timid with policy moves as inflation has been too high for too long and we are still far below the neutral rate.”

Adding to the 75 basis-point argument, the U.S. Federal Reserve has raised rates by that much at back-to-back meetings and another similar move could be on the cards. That weakens the euro and further boosts euro zone inflation.

While many policymakers said the aim is to first get rates to the “neutral” level, where the ECB is neither stimulating nor cooling growth, Knot said this rate – somewhere between 1% and 2%, may not be enough and restrictive policy could become necessary.

Speaking just two days before the ECB’s next quiet period, Pierre Wunsch, Belgium’s central bank chief, echoed Knot’s comment, arguing that restrictive policy may be necessary, even as a recession is now likely.

“I think the consensus is we have to move quickly to a level that at some point … will be restrictive,” Wunsch said.

The complication is that high energy prices will reduce consumption and weigh on industrial output, almost certainly pushing the bloc into recession over the winter months.

Rate hikes into a recession normally exacerbate a downturn but this shock driven by soaring commodity price and ECB policy has little power over supply-side disruptions.

“We should not delay further rate hikes for fear of a possible recession,” Nagel said. “Inflation rates will not return to the central bank’s inflation target on their own.”

Knot, who said he was leaning towards a 75 basis-point move, added that given the scarcity of labour, firms are likely to “hoard” workers in the initial phase of a downturn, so this recession would not shake the economy as some expect.

“Even if this slowdown were to materialize, this in itself is unlikely to bring inflation back to our objective over the medium term,” he said.

As part of policy normalisation, Knot said the ECB should also consider reducing its balance sheet by not investing all of the proceeds maturing its in Asset Purchase Programme.

But any rundown of assets should be “very gradual” and talks on this are not expected before October or December, he said.

Cox is getting into the mobile industry — again