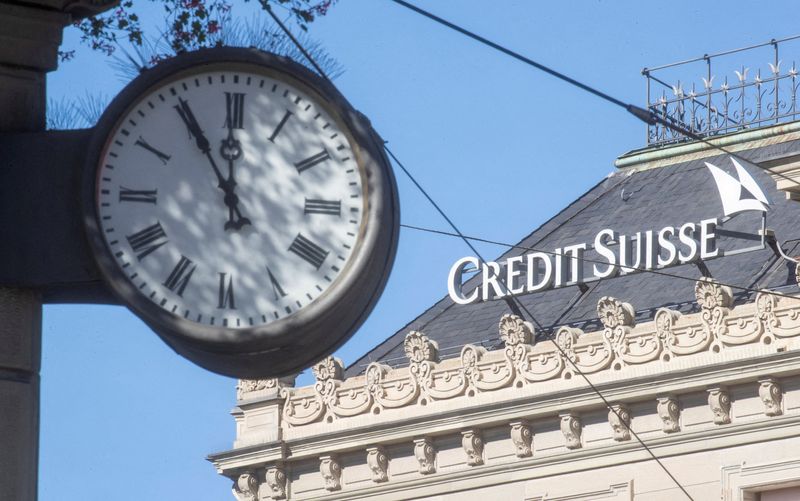 © Reuters. FILE PHOTO: A clock is seen near the logo of Swiss bank Credit Suisse at the Paradeplatz square in Zurich, Switzerland October 5, 2022. REUTERS/Arnd Wiegmann/File Photo

The unit, which includes a platform for investing in collateralized loan obligations, is expected to draw interest from private equity firms, the report said, adding that no final decision has been made and Credit Suisse could opt to hold on to the unit.

Credit Suisse, one of the largest banks in Europe, is trying to recover from a string of scandals, including losing more than $5 billion from the collapse of investment firm Archegos last year, when it also had to suspend client funds linked to failed financier Greensill.

Earlier in the day, Reuters reported citing a source that Credit Suisse has approached at least one Middle Eastern sovereign wealth fund for a capital injection, while some funds are looking at the scandal-hit Swiss bank’s businesses as potential investment opportunities.

Credit Suisse is also under investigation from the U.S. Justice Department on allegations that it continued helping U.S. clients hide assets from authorities, eight years after the Swiss bank paid a $2.6-billion tax evasion settlement, according to media reports.

Earlier in October, Switzerland’s second biggest bank, said it will buy back up to 3 billion Swiss francs ($3.01 billion) of debt, in an attempt to show its financial muscle when speculation about the bank’s future gathered pace on social media.