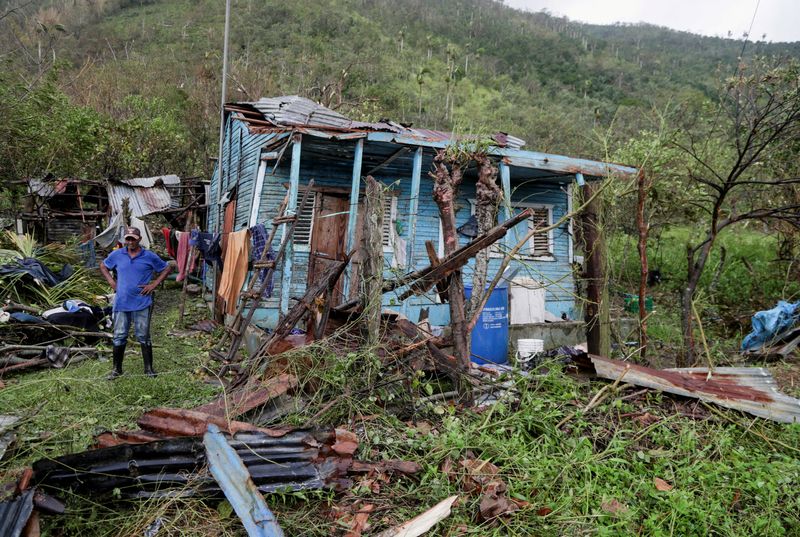 © Reuters. FILE PHOTO: A man stands outside his destroyed house in the rural zone of Cuey in the aftermath of Hurricane Fiona, in El Seibo, Dominican Republic, September 20, 2022. REUTERS/Ricardo Rojas/File Photo

The report by the European Network on Debt and Development (Eurodad) said 37 island and coastal countries that are home to some 65 million people, received just $1.5 billion in climate finance between 2016 and 2020.

The states, from the Dominican Republic to Samoa, “urgently need to increase their fiscal space to tackle the multiple challenges and crises facing them,” wrote Iolanda Fresnillo (LON:), one of the authors of the report.

Over the same period, 22 of the nations paid more than $26.6 billion to their external creditors, said the report from Eurodad, which comprises more than 50 non-governmental organisations.

More countries had turned to the International Monetary Fund for help, with the number of those having programmes with the fund jumping from three in 2019 to 20 between 2020 and 2021.

In June, the fund’s executive board approved a $60 million programme for Cape Verde while Barbados struck a deal for $293 million in late September.

The report found that more than 80% of the island states were in debt difficulties under criteria established by the IMF and World Bank Debt Sustainability Analysis, or by civil society groups Debt Justice UK and Jubilee Germany.

How to shore up fragile, smaller economies buckling under the strain of a fallout from COVID-19 and Russia’s war in Ukraine will be discussed this week when policy makers from around the globe gather in Washington for the annual IMF and World Bank meeting until Oct. 16.

However, while U.S. Treasury Secretary Janet Yellen views debt restructuring as a key priority, senior Treasury officials said on Tuesday they did not expect any major breakthroughs on debt matters this week.

Some researchers also note that the IMF’s decision-making process posed a challenge. They say the quota system based on an economy’s size meant low- and middle-income countries most likely to borrow had little influence on the lender’s decisions.

“When scarce public finances are mostly spent on debt service rather than on investments to build a more resilient economy, countries will be locking into a cycle of unsustainable debt further fueled by climate impacts,” wrote Lara Merling at the Boston University Global Development Policy Center in a research paper published on Tuesday.

Meta figured out legs for its Horizon avatars