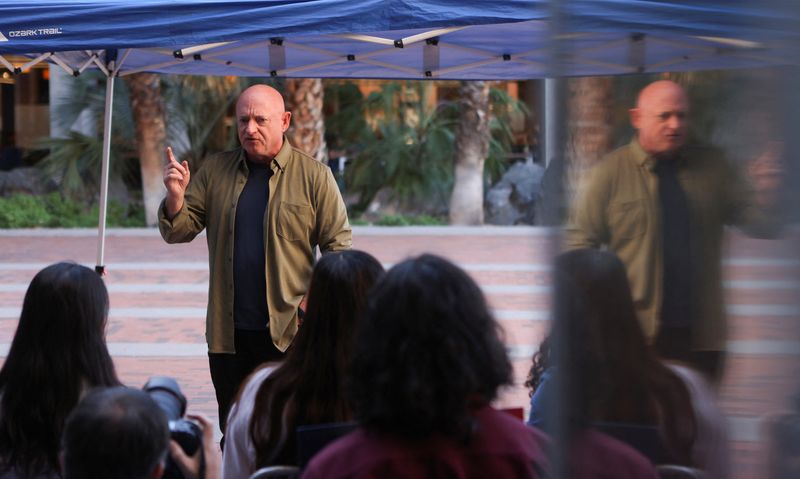 (Reuters) – Control of the U.S. Senate still had not been determined as of Friday evening, three days after the Nov. 8 midterm elections. Heading into the election, Republicans needed to pick up only one seat to take the majority in the 100-seat chamber, which would allow them to block much of Democratic President Joe Biden’s agenda.

The chamber is currently split 50-50 between Republicans and Democrats, who maintain control thanks to Vice President Kamala Harris’ tie-breaking vote. Democrats hope to expand their margin.

Here are eight races that party strategists are watching closely.

Incumbent Democratic Senator Mark Kelly, a former astronaut and husband of former U.S. Representative Gabby Giffords, has held onto his seat against Blake Masters, a Thiel-backed Republican. The state is a former right-wing stronghold where Democrats have made gains in recent elections – Biden won the state by 0.3% in 2020.

Kelly successfully portrayed his opponent as too extreme for Arizona, emphasizing controversial comments Masters made suggesting Social Security should be privatized. Masters also recently deleted portions of his campaign website where he advocated for a total abortion ban.

Kelly has been a moderate Democrat in the Senate, pushing for lower prescription drug costs and at times criticizing the Biden administration’s response to asylum seekers at the southern border with Mexico.

Democratic Senator Raphael Warnock will head to a runoff on Dec. 6 against Republican former college football star Herschel Walker, who is endorsed by former President Donald Trump, as both failed to clear the 50% threshold needed to win in the first round.

Walker had been hampered by a series of scandals, including allegations of domestic violence. A vocal anti-abortion advocate, Walker’s campaign was rocked by reports that he paid for multiple former girlfriends to have abortions in the past.

Warnock, who serves as pastor at the Atlanta church once led by Martin Luther King Jr., won a surprise victory in a special election in early 2021, giving Democrats control of the U.S. Senate.

Depending on the results of ongoing Senate races in Nevada and Arizona, the final results in Georgia could determine control of the Senate.

Republican Senator Ron Johnson defeated Democrat Mandela Barnes, the state’s lieutenant governor. Johnson’s statements questioning COVID-19 vaccines and the 2020 election made him a tempting target for Democrats, but Johnson is known as a tough incumbent, having pulled off surprise victories in years past.

Republicans argued Barnes was too radical for the state, pointing to his past support for progressive policies like Medicare for All and a 2018 photo in which he is holding a shirt that reads “Abolish ICE (NYSE:),” referring to an immigration enforcement agency.

The race appeared to tighten in recent days, particularly after a rocky debate performance from Fetterman, who was hampered by the lingering effects of a stroke he suffered in May.

Oz faced accusations of carpetbagging as a longtime New Jersey resident and said that “local politicians” should be involved in a woman’s decision to have an abortion.

Incumbent Democrat Maggie Hassan held onto her seat against Republican Don Bolduc, a retired U.S. Army general who promoted Trump’s lie that the 2020 election was stolen.

The seat was considered a top opportunity for Republicans, but some of Bolduc’s statements – including saying the FBI should be abolished and espousing COVID-19 conspiracies – made it impossible for him to win support beyond his right-wing base, despite his post-nomination attempts to moderate his positions.

Budd, a gun store owner, emphasized bread-and-butter concerns like inflation to appeal to moderate voters, backed a national ban on abortions after 15 weeks and has appeared at several rallies with Trump.

North Carolina has been politically competitive for more than a decade, but Republicans still tend to win most statewide contests. The previous incumbent was a Republican.

Trump endorsed Vance, and tech billionaire Peter Thiel was a major donor to his campaign.

Vance’s more controversial opinions – that he did not care what happened in Ukraine and claiming the Biden administration was purposely flooding the Midwest with fentanyl – and Trump’s comment at a campaign rally that Vance “is kissing my ass” made the race more competitive than expected. National Republican groups spent heavily to shore up his prospects.

Ryan emphasized his blue-collar background, supporting domestic jobs and a $15 minimum wage as his key policy planks, and distanced himself from party’s liberal wing.

Democratic Senator Mark Kelly, a former astronaut and husband of former U.S. Representative Gabby Giffords, is facing Blake Masters, a Thiel-backed Republican. The state is a former right-wing stronghold where Democrats have made gains in recent elections – Biden won the state by 0.3% in 2020.

Masters has sought to distance himself from controversial comments suggesting Social Security should be privatized. He also recently deleted portions of his campaign website where he advocated for a total abortion ban.

Kelly has been a moderate Democrat in the Senate, pushing for lower prescription drug costs and at times criticizing the Biden administration’s response to asylum seekers at the southern border with Mexico.

Although Republicans initially pulled funding in the wake of Masters’ struggles, the race – as with many others – has tightened in recent days.

Democrat Catherine Cortez Masto, the first Latina to serve in the Senate, is defending her seat against state Attorney General Adam Laxalt, a Republican who spearheaded his party’s efforts to overturn Biden’s victory there in the 2020 election.

Cortez Masto has emphasized abortion rights, while Laxalt has sought to harness voter concerns about rising prices – a pattern playing out in other states as well. The race has remained extremely close.

In a state where 30% of the population is Latino, analysts are watching whether these voters will continue to drift toward Republicans or whether Democrats can reverse this trend. (This story has been corrected to fix first paragraph to clarify the situation heading into the election)