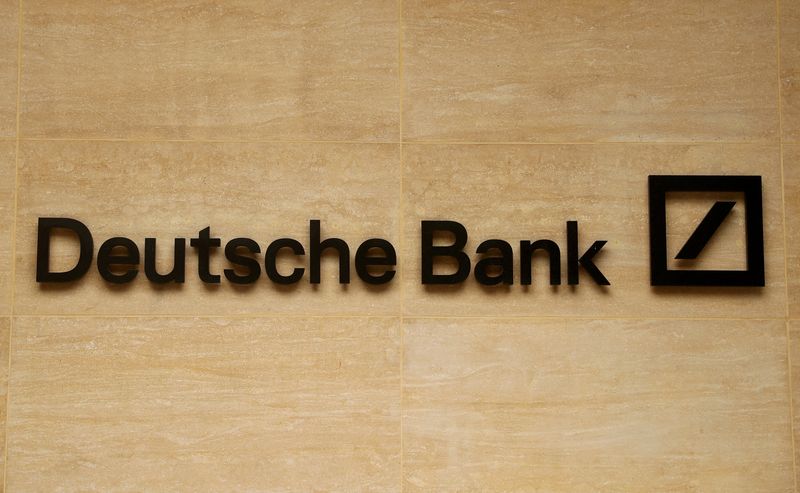 © Reuters. FILE PHOTO: The logo of Deutsche Bank is pictured on an office of the company in London, Britain July 8, 2019. REUTERS/Simon Dawson

(Reuters) -Deutsche Bank AG has cut staff in origination and advisory segments of its investment banking unit, according to a source familiar with the matter, as a pullback in financing deals compels lenders to rein in costs.

The move was communicated to the U.S. staff on Wednesday, the source said, requesting anonymity as the matter is confidential, calling it an annual exercise to manage the number of bankers without specifying the number of jobs slashed.

Investment bankers were awash with deals in 2021 but have seen few this year as companies halt buyouts and listings amid volatility in the capital markets, tensions between the United States and China, and the Russia-Ukraine war.

The move is a setback for Deutsche, whose investment bank in recent years recovered from being its problem child to its strongest revenue generator thanks to a pandemic trading boom and the deal-making frenzy.

That return to hiring was significant for Deutsche after years of losses, retrenchment and layoffs.

But costs have been an ongoing struggle for Deutsche. In July, it dropped its cost target for the full year.

This year is crucial for the lender and Chief Executive Christian Sewing as he tries to deliver on 2019 targets he set out in a costly overhaul of the bank.

The bank reports third quarter earnings on Wednesday. Analysts expect it to report a ninth consecutive quarter of profit, a notable streak after years of losses.

Amazon is quietly shutting down Fabric.com, one of the largest online fabric stores

At COP27, climate change framed as battle for survival By Reuters