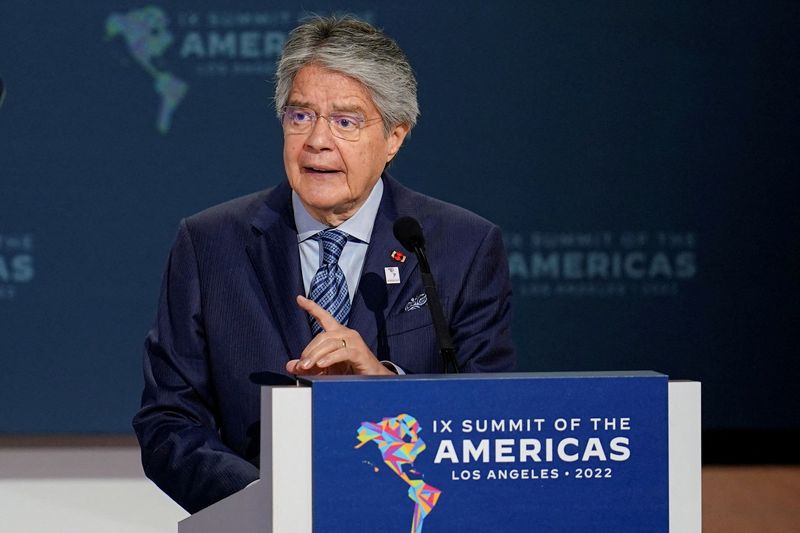 QUITO (Reuters) – President Guillermo Lasso said on Monday he will ask Ecuadoreans to approve a reduction in the number of lawmakers, allow the military to support police work to fight drug trafficking and back efforts to protect water sources in a referendum vote.

Lasso, a conservative ex-banker who took office in May 2021, has struggled to tamp down on increasing violence which his government blames on drug traffickers, while facing fierce political opposition and street protests against his policies.

“I ask you to use your democratic power through a citizen consultation which will confront problems that Ecuador has not been able to solve in the past,” Lasso said at an event in Quito.

As approval of the eight-question referendum would require changes be made to the country’s constitution, the constitutional court must approve the referendum before a date for the vote can be set.

Among the proposals is one to allow Ecuadoreans accused of drug trafficking and organized crime offenses in other countries to be extradited.

Also on the table is allowing the armed forces to join the police in operations to maintain public order within the country.

Lasso is also asking voters to reduce the number of seats in the national assembly from the current 137, depending on population figures in each province.

“We’re lacking less quantity and much more quality in lawmakers,” he said. “We’ll ask if you agree to reduce the number of lawmakers to around 100.”

Lasso has an antagonistic relationship with the assembly, where lawmakers have rejected his economic and security measures. Some called for his ouster during June anti-government protests by indigenous groups.

Lawmakers from the assembly, which is on recess until the end of the month, did not immediately comment on the referendum proposal.

The referendum will also ask citizens to approve the creation of a water protection system and compensation for people, communities and ethnic groups who aid nature conservation.