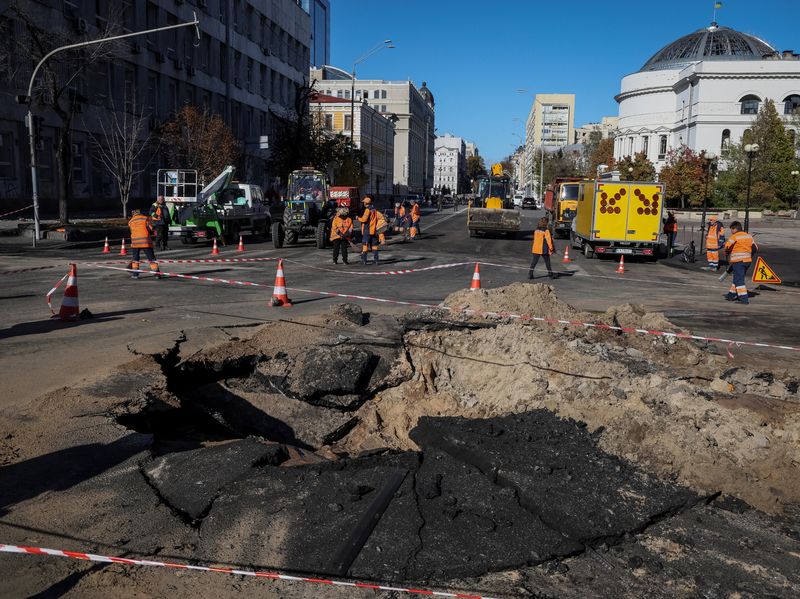 GENEVA (Reuters) -The United Nations and other aid organisations in Ukraine said on Monday that Russia firing missiles at cities across the country had disrupted their humanitarian work on the ground.

Russia hit sites across Ukraine, striking Kyiv with an intensity not seen since Russian forces sought to capture the capital early in the more than seven-month war.

Moscow says the strikes were against energy, command and communication targets in retaliation for what it describes as terrorist attacks.

“The wave of attacks, claimed by Russia, has… impacted humanitarian operations across Ukraine, particularly hampering the movement of aid workers and delivery of emergency supplies in the east of the country, where people are in desperate need of assistance,” the U.N. humanitarian office said in a report.

The International Committee of the Red Cross, which has some 700 staff at 10 locations across the country and delivers aid and medicine, said earlier on Monday that its teams had paused operations. A second Red Cross spokesperson later added that while field work had temporarily halted, aid workers were able to continue desk work. “As soon as it’s safe to move they will,” said Jason Straziuso.

The Norwegian Refugee Council also said that it had halted its aid operations in Ukraine until it is safe to resume, saying the temporary pause was affecting its work to pre-position supplies ahead of the winter.

“We cannot aid vulnerable communities when our aid workers are hiding from a barrage of bombs and in fear of repeated attacks,” said Jan Egeland, secretary general of the NRC.

“People are heartbroken that they had to freeze out work today. Hopefully we can start work again even as early as tomorrow,” he later told Reuters in an interview, saying he was worried about the impact of the disruptions on the elderly, many of whom are too weak to seek refuge elsewhere.

A spokesperson for the U.N. refugee agency said its operations continued, with staff sheltering during air raids.

Cardano founder points out flaws in Ethereum and Bitcoin By Cointelegraph

Adobe PT Lowered to $440 at Barclays

At least eight killed, more than 20 wounded in explosion in Baghdad By Reuters