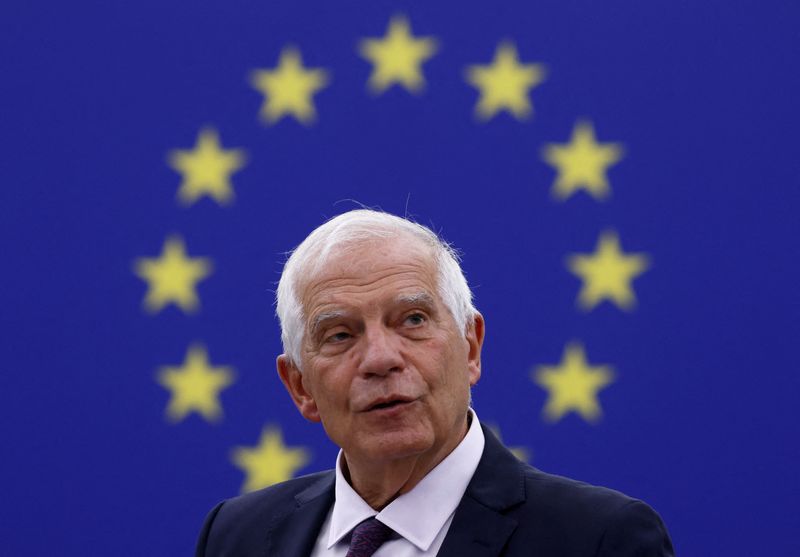 BRUSSELS (Reuters) – European Union sanctions are severely hurting Moscow’s potential to sustain its weapons and military equipment in the war on Ukraine, the EU’s top diplomat said on Tuesday, arguing almost half of Russia’s technology depended on European imports.

“If you look at the inside, the guts of a Russian tank destroyed on a Ukrainian street, you will see the tremendous amount of electronic components manufactured by European countries in those tanks,” EU foreign policy chief Josep Borrell told lawmakers at the bloc’s Parliament in Strasbourg.

“Forty-five percent of Russia’s technology depends on European imports and this has been cut off,” he noted.

Since Russia’s invasion of Ukraine on Feb. 24, the EU has slapped several packages of massive sanctions on Moscow – targeting the financial sector as well as energy and the transport sector.

In recent days Ukraine has stunned Russia with a counter-offensive in the Kharkiv region, with President Volodymyr Zelenskiy saying overnight that in total “more than 6,000 sq km (2,400 sq miles) of the territory of Ukraine in the south and in the east” had been liberated since Sept. 1.

“Two thirds of all civilian aircraft can no longer fly because their components come from Western countries and the blockade also makes it impossible for them to get the spare parts they need,” he noted.

In the military sphere, Borrell said Moscow was not able to overcome the “huge military losses it has undergone”.

President Vladimir Putin on Monday said Russia was holding up well in the face of Western sanctions. “The economic blitzkrieg tactics, the onslaught they were counting on, did not work,” he said on state TV while chairing a meeting on the economy.

Putin and his senior officials have been silent in the face of Russian forces’ worst defeat since the war’s early weeks, when they were repelled from the outskirts of Kyiv.