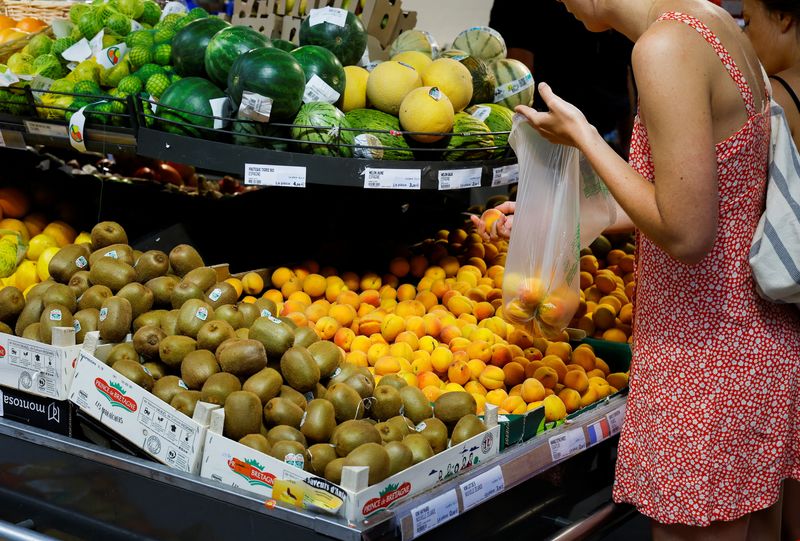 FRANKFURT (Reuters) – Euro zone inflation rose to another record high this month, beating expectations and solidifying the case for further big European Central Bank rate hikes even before pries peak near the turn of the year.

Consumer price growth in the 19 countries sharing the euro currency rose to 9.1% in August from 8.9% a month earlier, ahead of expectations for 9% and staying well clear of the ECB’s 2% target, data from Eurostat, the EU’s statistics agency, showed on Wednesday.

Energy costs remained the driver of prices but food inflation also rose into double digit territory while non-energy industrial goods, a particular focus for the ECB, showed a 5% price surge.

The figures only add to the ECB’s worries as it gears up for another big rate hike next week, but the outlook is even more bleak.

Soaring energy prices even before the start of the heating season and the reversal of some German subsidies almost ensure that inflation will continue to climb and exceed 10% before a peak around the turn of the year.

But more importantly, closely watched underlying price growth, which filters out volatile food and energy prices, continued to soar, suggesting that rapid price growth is spreading across the economy.

Inflation excluding food and fuel prices jumped to 5.5% from 5.1% while an even narrower measure, which also excludes alcohol and tobacco rose to 4.3% from 4.0%.

“Inflation will probably increase strongly next month, heading towards 10%, as some energy-relief measures expire in Germany,” UniCredit said in a note prior to the data release.

All this adds to the case for a big rate hike by the ECB on Sept. 8 and figures favour a growing camp of policy hawks looking for an exceptionally large hike.

Some ECB policymakers are making the case for a 75 basis point increase in the deposit rate, which now stands at zero, while others are arguing for a more modest increase, in line with July’s 50 basis point move.

Markets are also split with bets now leaning towards 75 basis points but still considering it an open question.

Still, regardless of the September decision, the direction of travel for policy rates appears crystal clear.

With inflation too high for too long, it is now at risk of getting entrenched, so interest rates will continue to climb, probably at all three remaining ECB meetings this year.

Rates should hit the so-called neutral level, which neither stimulates, nor slows the economy, around the turn of the year and the only question is whether the ECB will go beyond that level.

Such a decision is months away, however, and the bloc is likely to be in recession by then as high energy costs weigh on output and consumer spending.

That will force the ECB to reassess its stance and consider whether a downturn is enough of a deflationary force to arrest consumer price growth or if outright policy tightening is still needed.

The Grand Race for Techno-Security Leadership

Thailand Is Tightening Regulations On Crypto Ads By DailyCoin