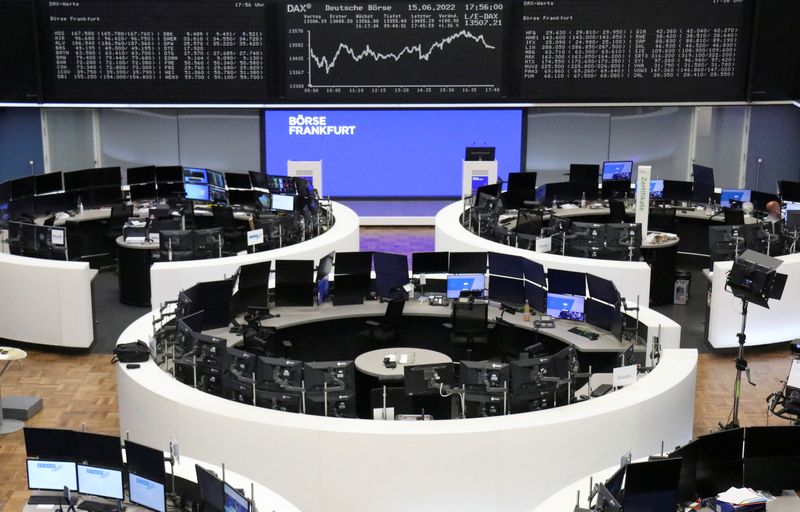 (Reuters) -European stocks tumbled on Thursday after a surprise interest rate hike from Swiss National Bank (SNB) fuelled fresh worries about the impact of inflation on the global economy, while a profit warning from Britain’s ASOS (LON:) hammered retail shares.

Already under pressure at the open after the U.S. Federal Reserve’s big interest rate hike on Wednesday, the benchmark fell further after the SNB’s unexpected rate hike.

The index was last down 1.3%, hitting a fresh three-month low.

Futures signalled a downbeat start for Wall Street after a relief rally on Wednesday when the Fed matched market expectations with 75 basis point rate hike, its biggest increase since 1994, and warned of a slowing economy and rising unemployment in the months to come.

“There is a lot of nervousness. After the initial relief to the Fed … markets seem to have woken up that it is still a 75 basis points rate hike,” said Giuseppe Sersale, strategist at Anthilia in Milan.

“There is very little to be cheerful about,” Sersale said, adding that with the Swiss central bank’s surprise rate hike, investors are clearly worried about more tightening elsewhere.

The Swiss equities index dropped 2.3%, lagging major regional European markets, with banking heavyweights such as UBS and Credit Suisse down over 3% each.

Smaller rival Boohoo shed 14.1% after reporting an expected fall in revenue in its latest quarter.

“The one area that has come under massive pressure is earnings expectations. If we’re dabbling with a recession or growth grinding to a halt, that’s a scenario which still has to see more downward revisions,” said Rupert Thomson, investment strategist at Kingswood.

The STOXX 600 snapped a six-day losing streak on Wednesday after the European Central Bank (ECB) unveiled measures to temper a bond market rout.

Still, worries about the darkening economic outlook and hit to corporate earnings have left the index with year-to-date losses of 16.4%.

UK’s blue-chip fell 1.4% ahead of a Bank of England policy meeting expected to result in another interest rate hike.

Prosus (OTC:) NV, the Dutch-based technology investor, slipped 3.2% after it said underlying earnings will fall in 2022 due to lower dividends from companies it invests in, and higher investment costs in e-commerce companies it operates.

Who is Deterring Whom? The Place of Nuclear Weapons in Modern War