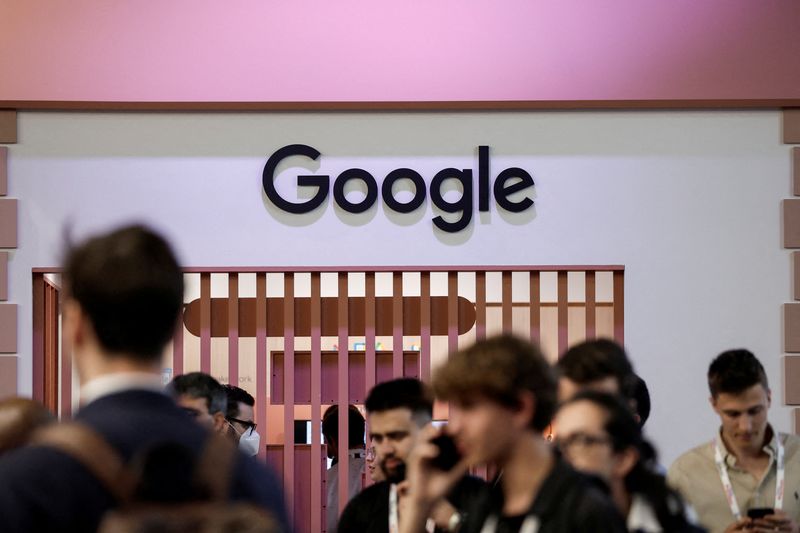 © Reuters. FILE PHOTO: A logo of Google is seen at its exhibition space, at the Viva Technology conference dedicated to innovation and startups at Porte de Versailles exhibition center in Paris, France June 15, 2022. REUTERS/Benoit Tessier/File Photo

BRUSSELS (Reuters) -Google was hit with an antitrust complaint on Monday after Danish online job-search rival Jobindex took its grievance to European Union regulators, alleging the Alphabet-owned business had unfairly favoured its own job search service.

The complaint could reinvigorate EU antitrust chief Margrethe Vestager’s scrutiny of the service, Google (NASDAQ:) for Jobs. Vestager said three years ago she was looking into the issue, but has yet to take any action.

Google, which has been fined more than 8 billion euros ($8.4 billion) by Vestager in recent years for various anti-competitive practices, says it partners with job providers to direct people to websites with job listings relevant to them.

“Any jobs provider, big or small, is able to take part and companies are seeing increased traffic and job matches as a result of this feature,” a Google spokesperson said.

Launched in Europe in 2018, Google for Jobs triggered criticism from 23 online job-search websites in 2019. They said they had lost market share after the online search giant had allegedly used its market power to push its new service.

Google’s service links to postings aggregated from many employers, allowing candidates to filter, save and get alerts about openings, though they must go elsewhere to apply. Google places a large widget for the tool at the top of results for ordinary web searches.

Jobindex, one of the 23 critics three years ago, said Google had skewed what had been a highly competitive Danish market towards itself via anticompetitive means.

Founder and CEO Kaare Danielsen said Jobindex had built up the largest jobs database in Denmark by the time Google for Jobs entered the local market last year.

“Nevertheless, in the short time following the introduction of Google for Jobs in Denmark, Jobindex lost 20% of search traffic to Google’s inferior service,” Danielsen told Reuters.

“By putting its own inferior service at the top of results pages, Google in effect hides some of the most relevant job offerings from job seekers. Recruiters in turn may no longer reach all job seekers, unless they use Google’s job service,” he said.

“This does not just stifle competition amongst recruitment services but directly impairs labour markets, which are central to any economy,” Danielsen said, urging the Commission to order Google to stop the alleged anti-competitive practices, fine the company and impose periodic payments to ensure compliance.

Jobindex said it had seen examples of free-riding, with some of its own job ads copied without its permission and marketed through Google for Jobs on behalf of Jobindex’s business partners. It also cited privacy risks to job applicants and its clients.

The Other Big Lessons That the U.S. Army Should Learn From Ukraine

U.S. retail sales unexpectedly fall in May By Reuters