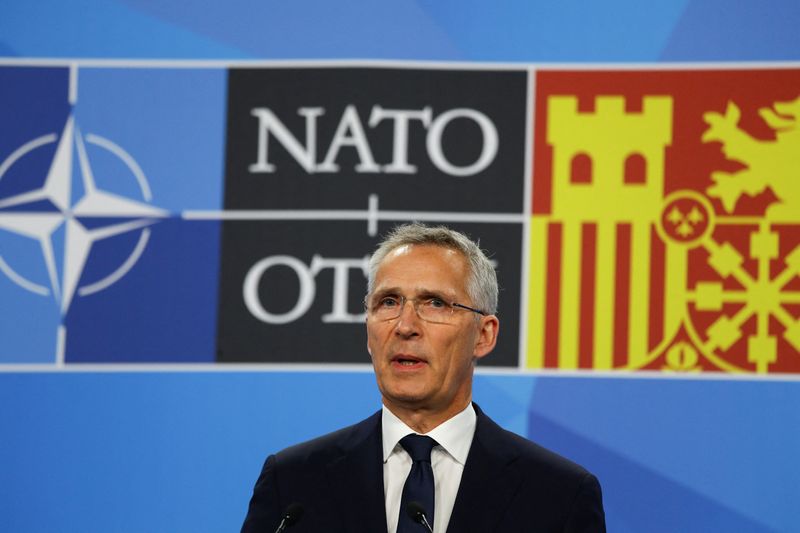 By Humeyra Pamuk and John Chalmers

NEW YORK (Reuters) -President Vladimir Putin will not win the war in Ukraine despite his order to mobilize thousands of extra troops, the secretary general of NATO said on Wednesday, calling the Russian leader’s threat to use nuclear weapons “dangerous and reckless rhetoric.”

Jens Stoltenberg told Reuters in an interview that Russia’s first mobilization since World War Two would escalate the conflict and cost more lives, but the move was evidence that Putin had miscalculated since the Feb. 24 invasion of Ukraine.

In an address to Russians earlier, Putin announced he would call up 300,000 reservists to fight in Ukraine and backed a plan to annex parts of the country, hinting to the West he was prepared to use nuclear weapons to defend Russia.

“If the territorial integrity of our country is threatened, we will use all available means to protect our people – this is not a bluff,” Putin said.

Stoltenberg, speaking to Reuters Editor in Chief Alessandra Galloni in New York, said the 30-nation Western defense alliance will stay calm and “not engage in that same kind of reckless and dangerous nuclear rhetoric as President Putin.”

“The speech of President Putin demonstrates that the war is not going according to President Putin’s plans. He has made a big miscalculation,” Stoltenberg said.

Putin’s speech followed mounting casualties and battlefield setbacks for Russian forces, who have been driven from areas they had captured in northeast Ukraine in a Ukrainian counter-offensive this month and are bogged down in the south.

Stoltenberg said that although Russian troops were ill-equipped and lacked proper command and control, it was hard see the conflict ending in the short term as long as Russia does not accept that Ukraine is a sovereign, independent nation.

“The only way to end this war is to prove that President Putin will not win on the battlefield. When he realizes that, he has to sit down and negotiate a reasonable agreement with Ukraine,” said Stoltenberg, the former Norwegian prime minister.

Stoltenberg added that members of the alliance have provided unprecedented support to Ukraine and that the NATO allies now need to replenish their stocks of weapons and ammunition.

As NATO was prepared for a “long haul” in dealing with Putin, it was now in close dialogue with the defense industry to build back its stocks of materiel, Stoltenberg said.

Stoltenberg said China is among the security challenges that NATO needs to face up to but does not see China as an adversary. Stoltenberg also noted China’s “coercive behavior” in the South China Sea and against its neighbors as well as “the way they violate basic human rights.”

The Kremlin in Command, Part I: The Chechen Wars and Georgia