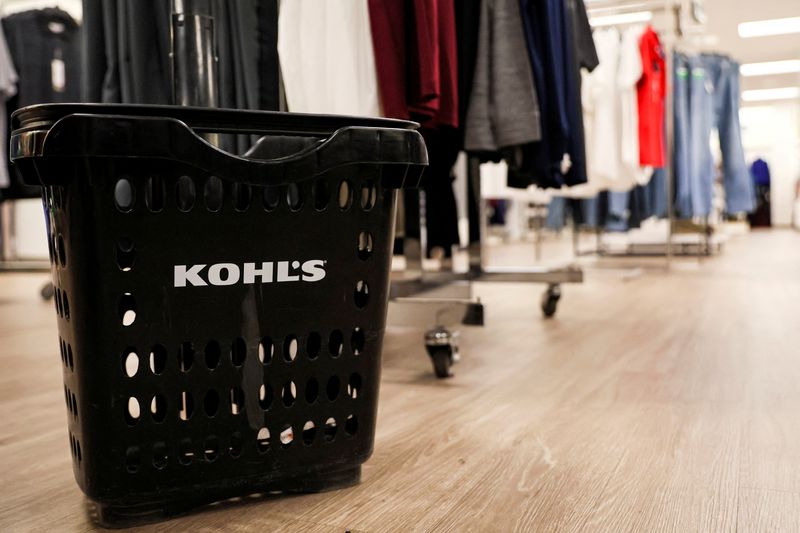 © Reuters. FILE PHOTO: The Kohl’s label is seen on a shopping basket in a Kohl’s department store in the Brooklyn borough of New York, U.S., January 25, 2022. REUTERS/Brendan McDermid/File Photo

(Reuters) -Private equity firm Oak Street Real Estate Capital LLC has made an offer to acquire as much as $2 billion of property from Kohl’s Corp (NYSE:) and have the U.S. retailer lease back its stores, according to people familiar with the matter.

Oak Street’s interest offers Kohl’s another chance to cut a deal after negotiations to sell itself to Franchise Group (NASDAQ:) Inc, owner of the Vitamin Shoppe, for almost $8 billion fell through in July over the department store operator’s deteriorating business prospects. Oak Street had sought to help finance Franchise Group’s bid.

Oak Street has now offered between $1.5 billion and $2 billion to buy real estate from Kohl’s and the two sides have met in the last few days to discuss a possible deal, the sources said. There is no certainty that negotiations will continue and that a deal will be reached, the sources added.

It was not clear how many of Kohl’s 1,100 stores would be involved in any deal with Oak Street.

Kohl’s shares jumped 9% on the news in New York on Friday to $31.04, giving the company a market capitalization of almost $4 billion. The stock had tumbled nearly 43% since January.

Kohl’s said in July after the deal negotiations with Franchise Group fell through that it was looking at ways to monetize its real estate. Sale-leasebacks turn retailers from landlords into tenants in their stores, allowing them to cash out on the equity of the real estate they have accumulated. They also saddle them with lease obligations.

Oak Street has completed such deals with several retailers, including Bed Bath & Beyond Inc (NASDAQ:) and Big Lots (NYSE:) Inc.

Kohl’s reported last month that its latest quarterly earnings tumbled on lower sales, forcing management to cut guidance for the year. Blaming high inflation for causing shoppers to pull back, Kohl’s reported a 63% drop in net income for the quarter that ended on July 30. The company also said sales could drop by 5% to 6% this year after having previously said that sales might be flat or rise slightly.

Twitter had a new plan to fight extremism — then Elon arrived

Honor 70 review: no deal-breakers, no showstoppers

Tesla Asks Employees to Help with ‘Very High Volume’ of Deliveries By Investing.com