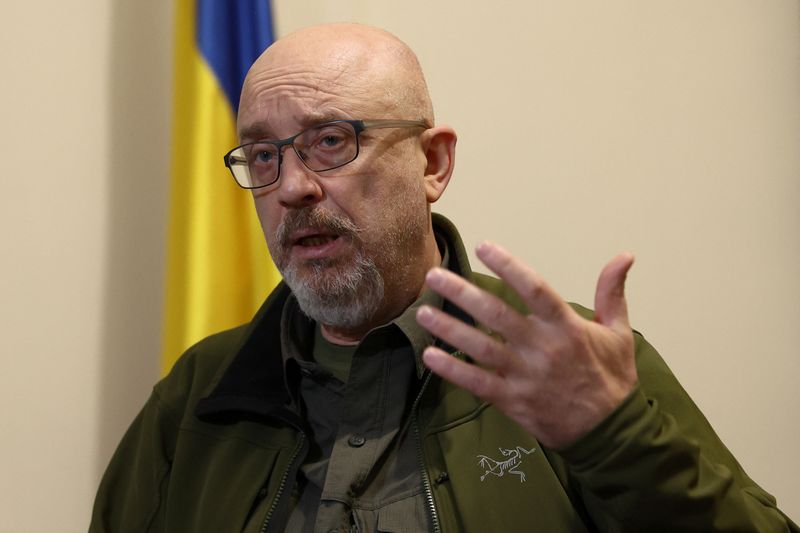 By Max Hunder and Tom Balmforth

KYIV (Reuters) -Ukraine’s defence minister said on Thursday it would take Russia at least a week to withdraw its troops from the southern city of Kherson and that winter would slow down battlefield operations, giving both sides a chance to regroup.

In an interview in Kyiv, Oleksii Reznikov said Russia had 40,000 troops in Kherson region and that it still had forces in the city, around the city and on the right bank of the vast Dnipro River.

“It’s not that easy to withdraw these troops from Kherson in one day or two days. As a minimum, (it will take) one week,” he told Reuters, acknowledging it was difficult to predict Russia’s actions.

Russia announced on Wednesday it would withdraw from the west bank of the Dnipro that includes Kherson city, the only regional capital Moscow has captured since invading Ukraine in February.

Reznikov said that such an exit would free up forces from both sides to fight elsewhere.

Ukraine, he said, had a security and defence force of 1 million personnel to guard a “non-friendly” 2,500-km border with Belarus, Russia and occupied Ukrainian areas.

Reznikov played down the threat of a Russian nuclear strike in Ukraine and dismissed as “crazy” the idea Moscow might blow up the vast southern Kakhovka dam as it withdraws.

He said that such a move would flood areas controlled by Moscow and also cut off their access to fresh water supply via a canal from the Dnipro to annexed Crimea.

“If you check the landscape in this district, you will find that the western bank is higher terrain and the east bank is lower terrain,” he said.

“This means the water will flow east of this bank and they will have a risk for their troops,” he said.

Both sides in the conflict have accused the other of planning to destroy the dam.

Reznikov accused the new commander of Russia’s invasion forces of carrying out a “doctrine of terrorists” by heavily bombarding civilians and critical infrastructure.

He also said that the Russian army under General Sergei Surovikin appeared to have become more disciplined since his appointment in October.

“They don’t send to Ukraine one or two rockets as before; they use 40 in a day and then wait – and then again, and again,” he said.

Amazon is subjecting Alexa to a performance review

An Interview with Game Inn Co-founder Dmitry Lukian By DailyCoin