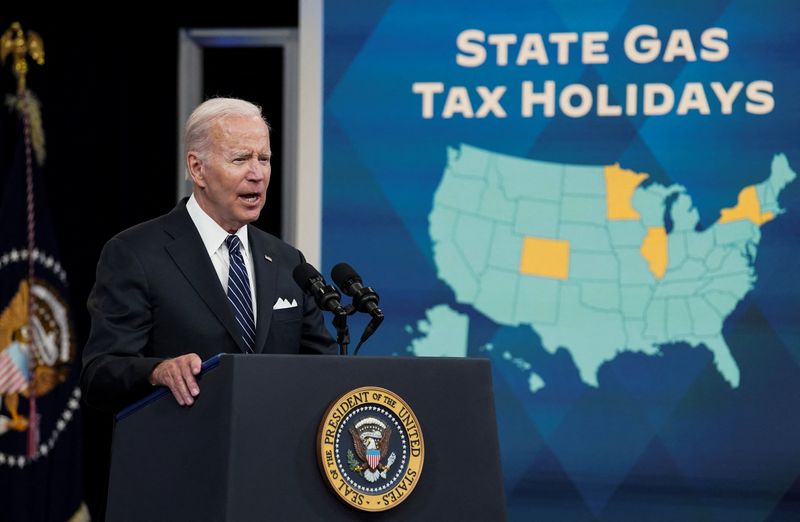 WASHINGTON (Reuters) – U.S. President Joe Biden wants Congress to suspend the federal fuel tax for three months to help lower record gasoline prices that threaten some of his fellow Democrats who are candidates in the Nov. 8 congressional elections.

Here are the main issues surrounding a fuel tax holiday:

WHAT ARE THE FEDERAL FUEL TAXES?

The federal fuel tax is 18.4 cents a gallon for gasoline and 24.4 cents a gallon for diesel, a level that hasn’t changed since 1993. At that time, gasoline cost about $1.05 per gallon, compared to just under $5.00 today, meaning it is a much smaller component of the overall pump price now.

But it is still an important source of public revenue. Congress first imposed it in 1932 during the Great Depression as a way to help revitalize the economy. It pays mainly for construction of highways and bridges, work that keeps businesses functioning by preventing transport delays. Some of the tax also goes to projects like mass transit.

Lifting the federal fuel tax through September, as proposed by Biden, would cost the Highway Trust Fund $10 billion but could be made up from other areas of the budget, according to the White House.

HOW MUCH DO STATES TAX FUEL?

Biden also called on state and local governments to suspend their own fuel taxes. U.S. state taxes on motor fuels are on average higher than federal ones, averaging more than 31 cents a gallon for gasoline and nearly 33 cents a gallon for diesel, according to the Energy Information Administration. California, Illinois, and Pennsylvania all have the highest gasoline taxes above 58 cents per gallon.

Alaska has the lowest at about 9 cents a gallon, while Texas, a big oil producing and refining state, has a 20 cent per gallon gasoline tax.

As gasoline prices marched higher this year following Russia’s invasion of Ukraine and as the world emerged from the worst of the COVID-19 pandemic, some states, including Maryland, Georgia and Connecticut already cut the state fuel taxes.

A review this month by researchers at Wharton https://budgetmodel.wharton.upenn.edu/issues/2022/6/15/effects-of-a-state-gasoline-tax-holiday, the University of Pennsylvania’s business school, found that 72% of the tax decrease was passed onto consumers in Maryland but only 58% to 65% of the savings were passed to consumers in Georgia. The researchers said that suppliers can capture part of the economic benefit if pump prices do not fall by the full amount of the suspended tax.

If a fuel tax holiday was passed by Congress it may not help consumers much. Temporarily reducing fuel prices, for example, could simply boost demand by leading drivers to consider longer trips and avoid car-pooling and mass transit. That, in turn, could mean prices head back to where they were, or even higher.

“This will actually stoke demand further and is actually bullish for oil,” Amrita Sen, co-founder and director of research at Energy Aspects, a research consultancy, said on CNBC on Wednesday.

WHAT ARE THE CHANCES BIDEN’S PLAN PASSES IN CONGRESS?

In February six moderate Democrats in the Senate, some of them up for re-election in November, introduced a bill to suspend the gasoline tax. But the bill faced opposition from Republicans, including the party’s senate leader Mitch McConnell because it failed to also suspend the tax on diesel that’s used by many trucks.

Biden’s request “is dead on arrival,” Senator John Thune, the second-ranking Republican in the chamber, said on Wednesday.

Even some of Biden’s fellow Democrats have opposed suspending the federal tax, however. One of them is House of Representatives Speaker Nancy Pelosi who has said oil companies would simply raise fuel prices and reap profits.

Senator Tom Carper, a Democrat from Biden’s state of Delaware, said on Twitter (NYSE:) on Tuesday that “suspending the primary way that we pay for infrastructure projects on our roads is a shortsighted and inefficient way to provide relief,” adding that other options for lowering energy costs should be explored.

The opposition from senior Democrats could mean Biden’s proposal for a tax holiday fails.