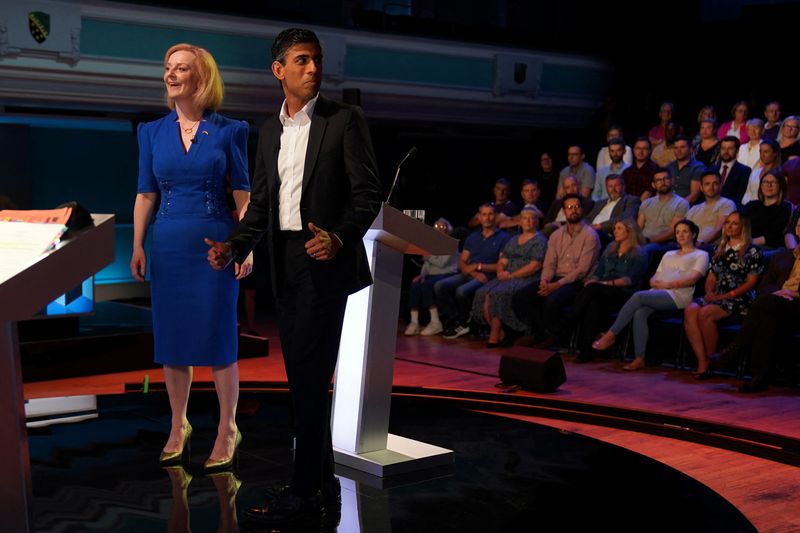 LONDON (Reuters) – Britain will get a new prime minister next week, with either Foreign Secretary Liz Truss or former finance minister Rishi Sunak being announced on Monday as the next leader of the governing Conservative Party, and the next prime minister.

The following outlines the handover of power between outgoing Prime Minister Boris Johnson and the winner.

The results of the Conservative Party leadership contest will be announced at 12:30 p.m. (1130 GMT) on Monday Sept. 5.

HOW THE HANDOVER TAKES PLACE

On Tuesday Sept. 6, in a break with tradition, the appointment of the new prime minister will take place at Balmoral Castle in Scotland, where Queen Elizabeth spends her summers, rather than at Buckingham Palace in London.

The 96-year-old monarch has had to scale back her public appearances this year due to episodic mobility issues, and will not travel to London.

Johnson is first expected to make a statement outside Downing Street early on Tuesday morning before travelling to Scotland to tender his resignation to the queen, expected at around midday.

Either Truss or Sunak will then meet with the queen and be asked to form a government.

Once the new prime minister has been appointed, the Court Circular, the official record of royal engagements, will record that “the prime minister kissed hands on appointment”.

Queen Elizabeth has had 14 prime ministers during her 70-year reign.

Truss or Sunak will fly back to London to deliver a speech outside Downing Street, expected at around 4 p.m. (1500 GMT).

The new prime minister will then appoint a cabinet.

The new team of ministers will meet early on Wednesday before the prime minister arrives in the House of Commons chamber at noon (1100 GMT) for their first head-to-head Prime Minister’s Question Time with the leader of the opposition Labour Party, Keir Starmer.