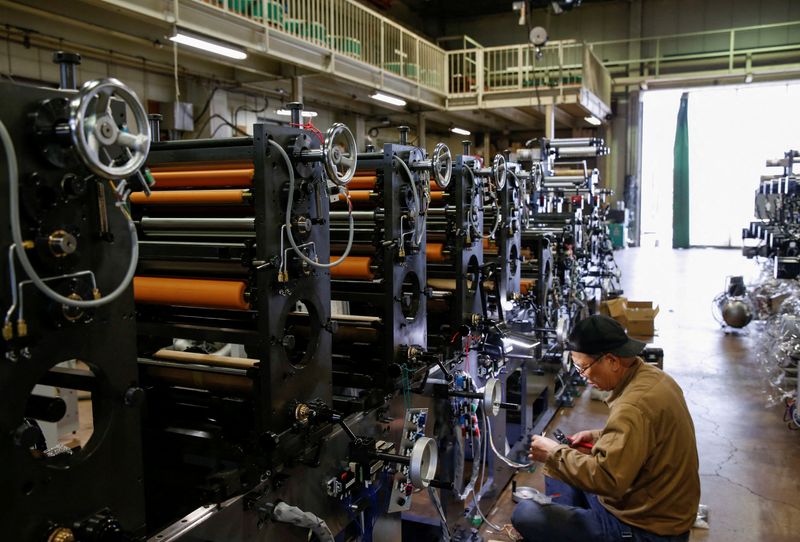 Inflation has soared globally as supply chains still healing from the coronavirus pandemic were hit again by Russia’s invasion of Ukraine, forcing consumers to rein in purchases.

U.S. manufacturing activity grew at its slowest pace since the depths of the first COVID-19 lockdown in May 2020 last month as the Federal Reserve’s aggressive push to raise interest rates in order to quash stubbornly high inflation cools demand for goods.

The Institute for Supply Management (ISM) said on Tuesday that its manufacturing PMI fell to 50.2 in October from 50.9 in September. A reading above 50 signals expansion in manufacturing, which accounts for 11.9% of the U.S. economy.

But while overall manufacturing activity fell, the ISM survey’s forward-looking new orders sub-index rose to 49.2 last month from 47.1 in September, indicating some resiliency among U.S. consumers even as the Fed’s actions curb spending.

Elsewhere, Canadian manufacturing activity contracted for a third straight month in October while British manufacturingsuffered its biggest contraction since May 2020 last month, suggesting a deepening slowdown was underway.

The final S&P Global (NYSE:) UK Manufacturing Purchasing Managers’ Index (PMI) for October fell to 46.2 from 48.4 in September, further below the 50-point mark that separates growth from contraction.

Manufacturing PMIs due on Wednesday for the euro zone are likely to show an ongoing downturn deepened last month as the cost of living crisis kept consumers wary.

Meanwhile in Switzerland, the PMI reading dipped by 2.2 points but remained in positive territory at 54.9 points, illustrating the ongoing resilience of the local economy.

Factory activity shrank in South Korea, Taiwan and Malaysia in October, and expanded at the slowest pace in 21 months in Japan, highlighting the pain from slowing Chinese demand and stubbornly high import costs.

China’s Caixin/S&P Global manufacturing PMI stood at 49.2 in October, up from 48.1 in September. The private sector survey was in line with an official PMI released on Monday that showed China’s factory activity unexpectedly fell in October.

“Another big risk is the pace of U.S. rate increases. If the Federal Reserve continues to hike rates steadily, that could ignite capital outflows from Asia and hurt exports.”

Further U.S. interest rate hikes are expected to force other central banks to act to prevent sharp capital outflows by tightening their own monetary policies, even if it means cooling already soft economies, analysts say.

Highlighting how the pain from soaring material costs and supply constraints outweighed the boost from a weak yen, auto giant Toyota Motor (NYSE:) Corp on Tuesday posted a 25% drop in quarterly profit and cut its annual output target.

South Korea’s factory activity shrank for a fourth straight month in October as orders for exports fell for an eighth month, the PMI showed.

That followed data showing South Korea’s exports fell the most in 26 months with shipments to China, its largest market, extending declines.

Taiwan and Malaysia both saw deeper contractions in manufacturing, while in Indonesia activity expanded again in October but at a slower pace than the previous month.

India was an outlier with factory activity expanding at a stronger pace in October as demand remained solid.