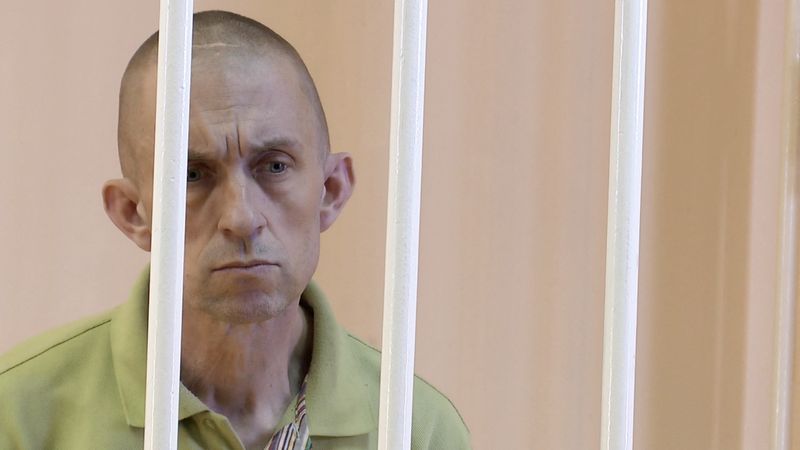 © Reuters. FILE PHOTO: A still image, taken from footage of the Supreme Court of the self-proclaimed Donetsk People’s Republic, shows British citizen Shaun Pinner captured by Russian forces during a military conflict in Ukraine, in a courtroom cage at a location giv

LONDON (Reuters) – The family of British man Shaun Pinner who has been sentenced to death by a court by Russian proxy authorities in Donbas have spoken of their devastation at the news and requested he is exchanged or released.

Two Britons, Pinner and Aiden Aslin, were convicted of mercenary activities by a court on Thursday in the self-proclaimed Donetsk People’s Republic, which is not recognised internationally.

Pinner’s family said the proceedings were an “illegal show- trial” and said he needed access to independent legal advice.

“Firstly, our whole family is devastated and saddened at the outcome of the illegal show trial by the so-called Donetsk People’s Republic,” the family said in a statement.

“Shaun should be accorded all the rights of a prisoner of war according to the Geneva Convention and including full independent legal representation. We sincerely hope that all parties will co-operate urgently to ensure the safe release or exchange of Shaun.”

Britain has called the court’s decision a “sham judgment” and condemned Russian proxy authorities in Donbas for what it called an “egregious breach” of the Geneva convention.

The two men were captured during the battle for the port city of Mariupol, one of the bloodiest of the conflict that broke out when Russian troops invaded Ukraine in late February.

Pinner’s family said he was a legitimate member of the Ukrainian army after being resident in the country for the last four years years.

“Our family including his son and Ukrainian wife, love and miss him so much and our hearts go out to all the families involved in this awful situation,” the statement said.

Gaming makes up over half of blockchain industry usage, DappRadar By Cointelegraph