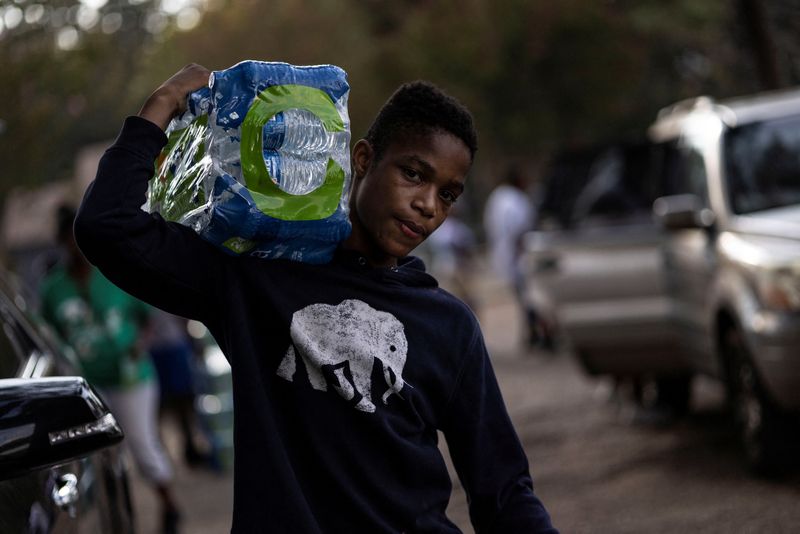 © Reuters. FILE PHOTO: A volunteer carries bottles of water at a water distribution site as the city of Jackson is to go without reliable drinking water indefinitely after the water treatment plant pumps failed, leading to the emergency distribution of bottled water

By David Brunnstrom and Kanishka Singh

WASHINGTON (Reuters) – It is too early to say when a water treatment plant in Mississippi’s state capital of Jackson that failed last week leaving tens of thousands of people without clean tap water can be fixed, the head of the U.S. Federal Emergency Management Agency (FEMA) said on Sunday.

Deanne Criswell told CNN’s State of the Union that FEMA’s current focus was on ensuring a supply of bottled drinking water while working with federal partners to see what needed to be done to bring the plant back to full operational capacity.

“I think it’s still too early to tell,” said Criswell, whose agency has been charged by President Joe Biden’s administration with coordinating disaster relief efforts for Mississippi, when asked when the plant might be fully operational again.

“It’s going to happen in phases,” she said after visiting Jackson on Friday. “The focus right now is making sure we can get bottled water out, but also we are providing temporary measures to help increase the water pressure, so that people can at least flush their toilets and use their faucets.

Complications from recent floodwaters knocked Jackson’s O.B. Curtis Water Plant offline on Monday night, leaving most of the state capital without safe running water and highlighting the problem of America’s crumbling infrastructure, which Biden’s administration has vowed to address.

The crisis has hobbled Jackson, forcing many stores and restaurants shut, while the public school system and Jackson State University had to move classes online.

Jackson Mayor Chokwe Antar Lumumba told ABC News the city’s water infrastructure was broken due to wear and tear and due to climate change.

He said the city may have water that is approved as fit for drinking within days rather than weeks, but ensuring a “reliable, sustainable” water treatment facility was “a much longer road ahead.”

Can the government track Bitcoin? By Cointelegraph

Baidu PT Lowered to $195 at Susquehanna

Is post-Merge Ethereum PoS a threat to Bitcoin’s dominance? By Cointelegraph