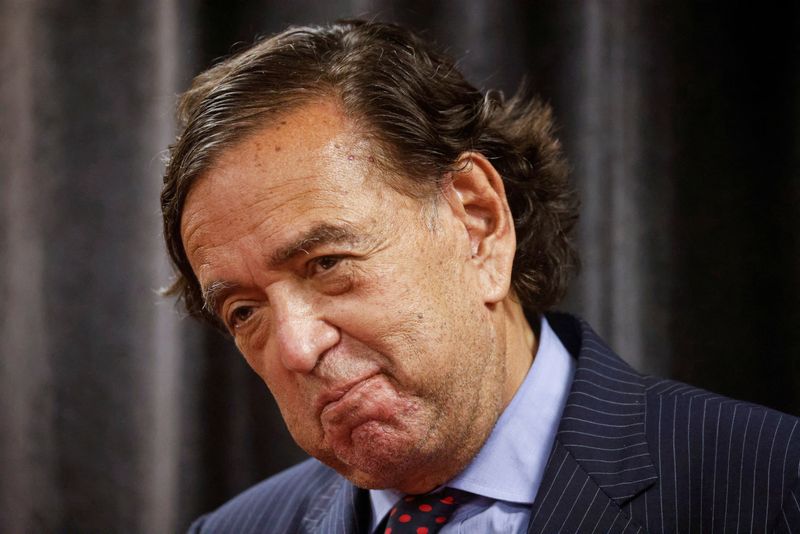 © Reuters. FILE PHOTO: Former U.S. diplomat Bill Richardson American looks on during a news conference after the release of journalist Danny Fenster, who was released from prison on Monday after negotiations between Richardson and the ruling military junta in Myanma

By Simon Lewis and Humeyra Pamuk

The former U.S. ambassador to the United Nations was on his way back, the source said, but did not provide further details on whom he met with or how his meetings went.

A spokesperson for Richardson said he was unable to comment on this at the moment.

The former New Mexico governor’s Richardson Center specialises in negotiating the release of prisoners and hostages. He has been involved in the release of several high-level prisoners, including that of American Danny Fenster from a Myanmar prison last year.

The U.S. State Department indicated that any outside effort to help secure the release of detained Americans abroad should be fully coordinated with it and that such attempts run the risk of complicating matters.

“In this case we believe that any efforts that fall outside of that officially designated channel have the potential to complicate what is already an extraordinarily complicated challenge that we face,” department spokesperson Ned Price told a press briefing.

He added that the U.S. government has been in touch with the Richardson Center, but said Richardson’s travel was not coordinated with the U.S. embassy in Moscow.

The Kremlin on Wednesday had no comment on Richardson’s trip. “There were no meetings at the Kremlin,” spokesman Dmitry Peskov told reporters on a conference call. “I have nothing to tell you on this subject.”

The United States in August said it has put forward a “substantial offer” on the table to secure the release of the two Americans.

Russia’s foreign ministry said last month it was engaged in “quiet diplomacy” with the United States about a potential prisoner swap that could include Griner and Whelan.

But there have been few public developments on the issue over the past weeks.

Washington has offered to exchange Russian arms trafficker Viktor Bout for Griner and Whelan, sources familiar with the situation have told Reuters.

Whelan, who holds American, British, Canadian and Irish passports, was sentenced in 2020 to 16 years in jail after being convicted of spying. He denied the charge.

Griner, who had been prescribed medical cannabis in the United States to relieve pain from chronic injuries, was arrested at Moscow’s Sheremetyevo airport in February with vape cartridges containing hashish oil in her luggage.

Cannabis is illegal in Russia for both medicinal and recreational purposes.

These Sense-Making Bookmarks Are Great for Science Notebooks

In tribute to rights leader King, Biden invokes ‘battle for the soul of this nation’ By Reuters