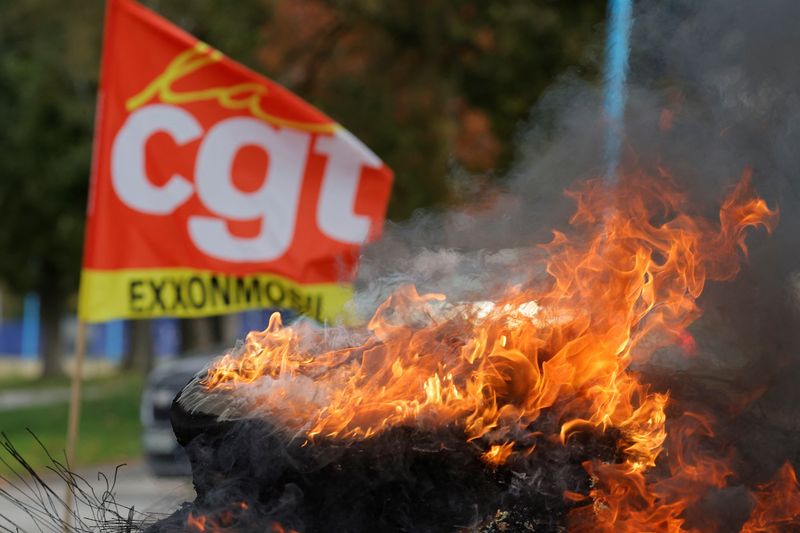 By Caroline Pailliez and Forrest Crellin

PARIS (Reuters) -France on Wednesday ordered some staff at an Exxon Mobil (NYSE:) fuel depot back to work and warned a TotalEnergies’ depot could be next, risking a wider conflict with trade unions as it battles to secure petrol supplies after weeks of strikes.

The French energy ministry said it was requisitioning some staff at the Gravenchon-Port Jerome depot run by Exxon’s Esso France business, where the hardline CGT remains on strike despite a pay deal with other unions.

Trade unions are demanding wage increases to help workers cope with spiralling inflation as Europe contends with one of its worst cost-of-living crises in decades.

While the right to strike is enshrined in the French constitution, the government can requisition a minimum number of staff needed to sustain a service in certain circumstances.

The CGT said it would challenge the requisitions in court once it had received the notifications. A government attempt in 2010 to requisition refinery staff was suspended by a judge.

Government spokesman Olivier Veran said the situation had become “unbearable” and the requisitions should lead to a “very marked improvement … in the coming days”.

He warned that the government could also requisition staff at the TotalEnergies depot in Dunkirk, northern France, where the CGT is also on strike.

Veran said requisitions would only take place when there was no dialogue between unions and management.

Government sources told Reuters that it only needs to order about 15 to 20 people back to work in order to get the depots running again, which can be achieved by requisitioning non-striking workers and providing protection from pickets.

“Management has asked us to at least allow the resumption of deliveries of available fuel products, even if the refineries remain halted,” he said, adding that the CGT would now discuss next steps with workers.

TotalEnergies said it was in talks with other unions and declined further comment.

The CGT has called for support from workers in other sectors and there were signs of that happening after an FNME union official said some staff at utility EDF (EPA:)’s nuclear plants had resumed a strike over wages, delaying maintenance work on at least five reactors, including the Bugey facility.

FNME representative Viginie Neumayer said it had sent a message of support to strikers at TotalEnergies and Exxon.

“The threat of requisition, which is above all a sign of government feverishness, has never demonstrated its effectiveness in getting out of this conflict,” Neumayer said.

The refinery and fuel depot stoppages are among the longest since a cost-of-living crisis sparked labour unrest in Europe.

Strike action and unplanned maintenance have taken more than 60% of France’s refining capacity offline, causing long queues at French service stations and rationing in some regions.

ExxonMobil has agreed a deal with two leading unions for a 6.5% salary hike in 2023, but the CGT, which is demanding a 10% pay rise, has rejected the agreement. TotalEnergies remains deadlocked with unions.

“For now it does not look like management is willing to make proposals that could lead to an end of our strike,” CGT’s Defresne told Reuters.

Sylvain Bersinger, an economist at consultancy Asteres, said the economic impact should be limited this quarter.

“Such a loss of activity due to strikes is generally made up for in the following quarter,” he added.

50 School Jokes for Kids Who Want To LOL

Amid homeless crisis, New York to step up forced hospitalization of mentally ill By Reuters