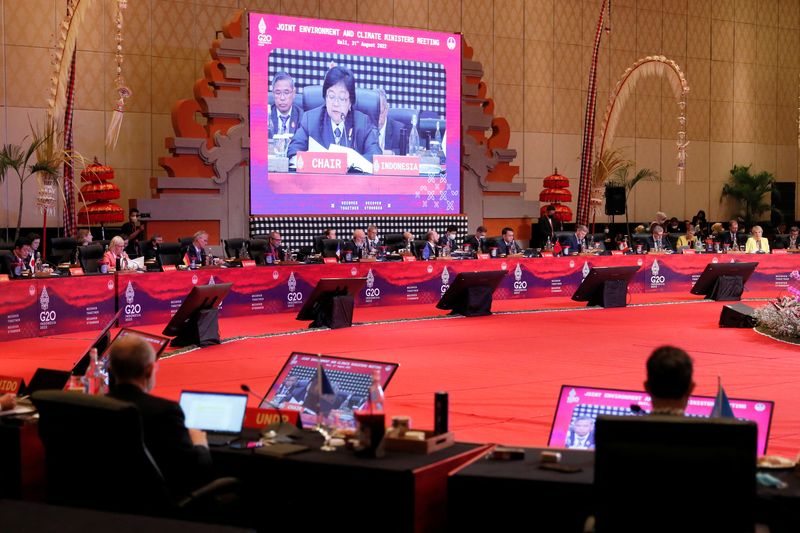 NUSA DUA, Indonesia (Reuters) – Officials from the Group of 20 major economies meeting on Wednesday for climate talks in Bali have been unable to agree a joint communique, amid objections over language used on climate targets and the war in Ukraine, two sources told Reuters.

Indonesia’s Environment Minister Siti Nurbaya Bakar had started the meeting by urging countries to cut emissions and prevent the planet from being pushed to a point “where no future will be sustainable”.

But some countries, including China, had objected to previously agreed language in the Glasgow climate pact and past G20 agreements on efforts to limit global average temperature rises to 1.5 degrees Celsius, said an official with knowledge of the meeting, declining to be identified because they were not authorised to speak to the media.

China’s foreign ministry did not immediately reply to a request for comment.

Another diplomatic source told Reuters there had been disagreements about language around climate and also references to the war in Ukraine.

Siti had earlier said she hoped a joint communique would be signed by the end of the day, but made no mention of it in her press conference later on Wednesday.

A spokesperson for Indonesia’s environment ministry was not immediately available for comment on the matter.

The G20 climate meeting, hosted by this year’s chair Indonesia, comes as extreme weather events – fires, floods and heat waves – pummel several parts of the world, including unprecedented flooding in Pakistan in recent weeks that has killed at least 1,000 people.

Scientists say most such extreme weather events are attributable to human-caused climate change and will only increase in severity and frequency as the globe edges closer to the warming threshold of 1.5 degrees Celsius above pre-industrial levels.

Environment officials from Australia, Brazil, India, Japan, South Korea, and U.S. Special Presidential Envoy for Climate John Kerry, were among those attending the talks in Bali, with more bilateral meetings expected on Thursday.

Indonesia as current G20 chair invited representatives from the African Union to join the talks for the first time, said Siti, adding that voices from all countries, regardless of their wealth and size, must be heard.

Also in attendance was Alok Sharma, president of last year’s 26th United Nations Climate Change Conference (COP26), who said the war in Ukraine had increased the urgency of a need to shift to renewable sources of energy. The COP27 climate summit will be held in Egypt this November.

“The current energy crisis has demonstrated the vulnerability of countries relying on fossil fuels controlled by hostile actors,” he said in a statement on Tuesday.

“Climate security has become synonymous with energy security and the chronic threat of climate change is not going away,” he said.

The open elevator door button puts kindness at our fingertips