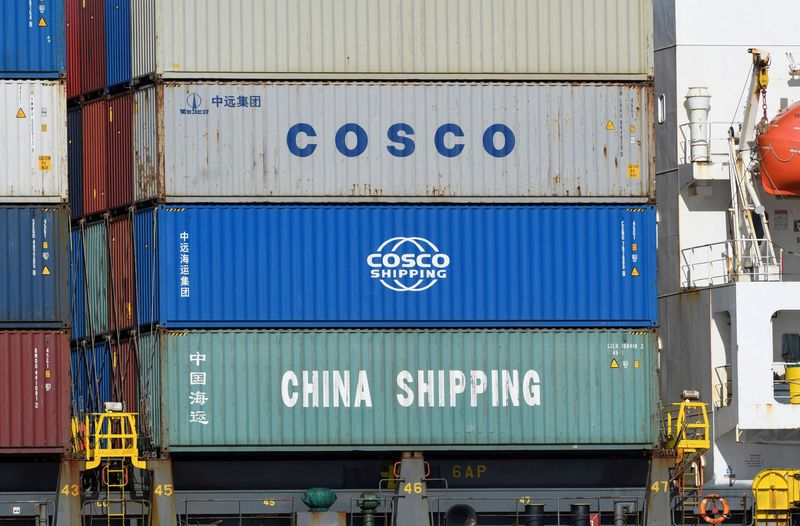 © Reuters. FILE PHOTO: Containers of Chinese companies China Shipping and COSCO (China Ocean Shipping Company) are loaded on a container as it is leaving the port in Hamburg, Germany March 11, 2020. REUTERS/Fabian Bimmer

By Christian Kraemer and Andreas Rinke

BERLIN (Reuters) -Germany may allow China’s Cosco to take a smaller stake than originally planned in a Hamburg port terminal, in what an economy ministry source on Tuesday described as an “emergency solution” to approve the deal but mitigate the impact.

Shipping giant Cosco made a bid last year to take a 35% stake in one of logistics firm HHLA’s three terminals in Germany’s largest port, but the German coalition has been divided over whether to let the deal go ahead.

The compromise would see Berlin approving a sale of 24.9% of the terminal to Cosco, several government sources said. It will be discussed by the cabinet on Wednesday.

The sources said Germany’s economy and foreign ministries still wanted to block the deal entirely but were unlikely to succeed, with Chancellor Olaf Scholz expected to prevail over the objections from other ministers.

“The economy ministry has the position that we should not have Chinese investment in critical infrastructure if possible,” Economy Minister Robert Habeck said in Luxemburg on Tuesday on the sidelines of the EU energy ministers’ meeting.

The German government has not agreed on a joint position yet, Habeck added.

How the government handles the matter is seen as a gauge of how far Germany is willing to toughen its stance on China, its top trading partner, due to concerns about being overly dependent on the increasingly assertive authoritarian country.

The news comes a week before Scholz is due to travel to China.

Supporters of the deal say it will allow Hamburg, where Scholz was mayor before becoming chancellor, to keep pace with rival ports that are also vying for Chinese trade and some of which are partly owned by Cosco.

“The federal government departments involved see a limit to 24.9% as an ’emergency solution’ to prevent worse things from happening,” the economy ministry source said, adding a smaller stake would give Cosco less say in running the terminal.

“Of course, this does not solve the actual risk issues, so the departments continue to believe that a complete ban is the right way to go,” the source said, speaking on condition of anonymity because the matter is confidential.

A second source said the government could try to attach additional guarantees to the deal to further mitigate Cosco’s influence on the running of the port terminal.

Beijing has previously said it hoped Germany would view the deal in an “objective and rational light” without politicising economic relations.

Andreas Audretsch, a senior lawmaker from Scholz’s coalition partner the Greens, said his party wanted to ban the deal.

“The fact that Cosco should now take over less than 25% of the terminal is not a compromise, but an emergency solution to prevent worse things from happening,” he said.

“Germany can no longer afford to be naïve when dealing with autocracies.”

What is an Ethereum Virtual Machine (EVM) and how does it work? By Cointelegraph