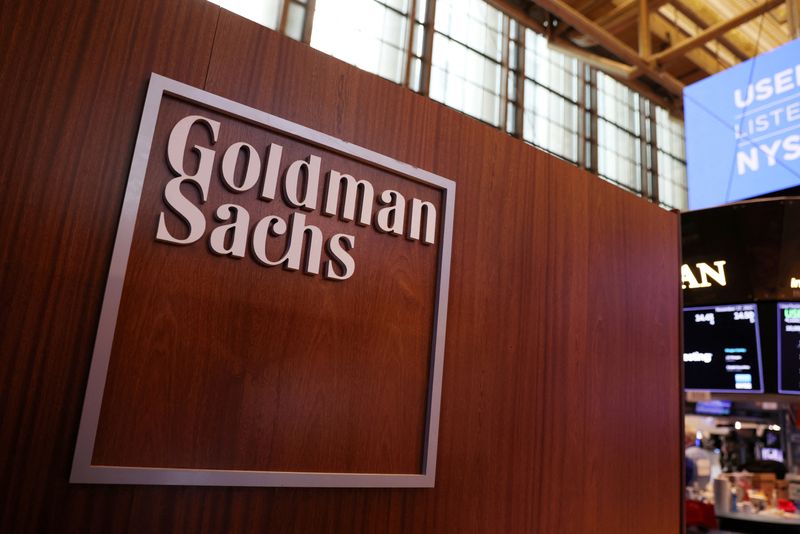 (Reuters) -Goldman Sachs Group Inc unveiled a plan to reorganize its business into three units in its biggest overhaul since 2020, as the Wall Street giant reported a smaller-than-expected 44% slump in third-quarter profit on Tuesday.

The bank will now have three operating segments – asset and wealth management, global banking and markets, and platform solutions. The money-losing consumer unit Marcus was placed under its wealth business.

“The street certainly seems to view the Goldman reorg to be a positive and well thought-out strategy,” said Art Hogan, chief market strategist at B. Riley Wealth.

The reshuffle comes as the investment bank seeks to boost its income from fee-based businesses at a time when rising interest rates have dented valuations and deal-making.

“Against the backdrop of uncertainty and volatility in the markets, we continue to prudently manage our resources and remain focused on risk management,” Chief Executive David Solomon said in a statement.

The bank rounds out a mixed quarter for big U.S. banks, in which choppy capital markets and slowing economic growth weakened investment banking.

“Rising borrowing costs, which are boosting net interest income, are working as a sort of parachute for the banks, while the slowing economy is still robust to handle the pain,” said Guido Petrelli, Founder and CEO of Merlin Investor.

Dealmaking slowed in the quarter, casting a pall over some of Goldman’s most lucrative businesses. However, rising borrowing costs resulted in a 31% surge in net interest margin.

That in part helped the bank post a profit of $8.25 per share in the quarter ended Sept. 30, easily beating analyst’s average estimates of $7.69, according to Refinitiv data.

Goldman’s investment banking revenue came in at $1.58 billion, down 57% from last year, reflecting a decrease in M&A and equity and debt underwriting.

After a round of job cuts in September, Solomon said on Tuesday Goldman has no such further plans.

“It’s time to be cautious,” Chief Executive David Solomon said in an interview on CNBC, referring to the state of the economy.

“You have to expect that there’s more volatility on the horizon now. That doesn’t mean for sure that we have a really difficult economic scenario. But on the distribution of outcomes, there’s a good chance we have a recession in the United States,” he said.

In the face of aggressive rate increases by the Federal Reserve and the Ukraine war, investors boosted trading activity, helping the bank’s fixed income, currency and commodities division.

A jump in interest rates typically translates into higher profitability for banks, which earn on the difference between interest paid on deposits and that collected on loans.

In the consumer and wealth management business, Goldman saw revenue jump 18% to $2.38 billion in the quarter, reflecting higher demand for loans and higher fees from managing assets.

Goldman said its consumer unit will be folded into two separate businesses – wealth management and the newly created platform solutions. The Platform Solutions unit will include GreenSky, the fintech lender Goldman bought in a $2.2 billion deal.

Trading revenue in the third quarter surged 11% to $6.20 billion, as a 41% jump in fixed income, currency and commodities revenue offset declines from equity trading revenue, which was down 14%.

China central bank head likely to step down amid reshuffle