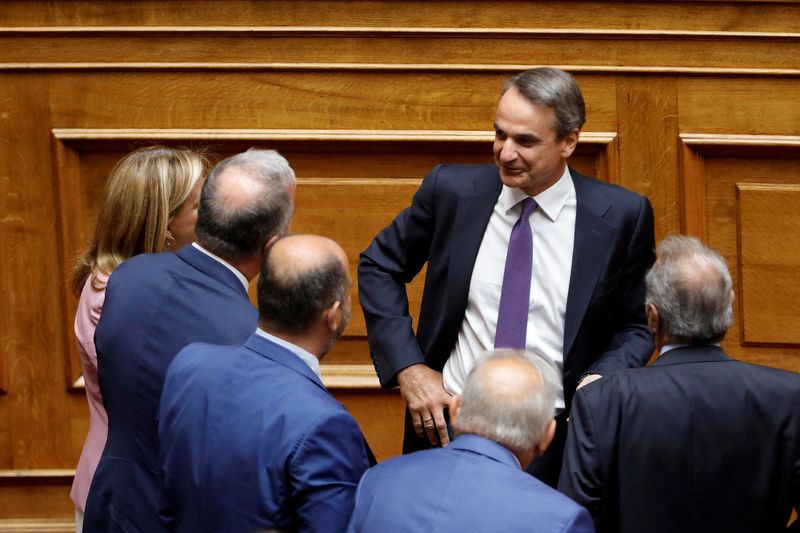 © Reuters. FILE PHOTO: Greek Prime Minister Kyriakos Mitsotakis speaks with members of his government and lawmakers during a parliamentary session on a wiretapping case, in Athens, Greece, August 26, 2022. REUTERS/Costas Baltas

ATHENS (Reuters) – Greek lawmakers on Monday voted in favour of setting up an inquiry commission to probe the phone tapping of an opposition leader that led Prime Minister Kyriakos Mitsotakis to sack the head of the country’s intelligence service (EYP).

The scandal over the wiretapping of Nikos Androulakis, leader of socialist party PASOK, Greece’s third-largest political party, has turned up the heat on the conservative premier who brought EYP under his control after taking office three years ago.

Mitsotakis has said the phone tapping of Androulakis for reasons of national security was legal but “politically unacceptable.”

PASOK’s request for an inquiry commission passed the 300-seat parliament with 142 lawmakers voting in favour. A minimum of 120 votes was needed to approve the request.

“There are huge question marks that must be answered. Are there more politicians and journalists under surveillance? Who decided the legal phone tapping and why?” asked PASOK lawmaker Haris Kastanidis.

The government has not disclosed the national security reasons that justified the tapping of Androulakis’ phone last year.

The leftist SYRIZA party, the majority opposition, voted in favour of setting up the inquiry commission and alleged that Mitsotakis had orchestrated the phone taps.

“Either there was a national security reason, meaning Androulakis was a spy, or there wasn’t and therefore the phonetapping was illegal,” said SYRIZA lawmaker George Katrougkalos.

Mitsotakis, who faces elections in the summer of 2023 at the latest, has said he was not aware of the “legal” phone tapping and would not have allowed it had he known.

In an opinion poll by GPO, conducted Aug. 22-24, 58.3% of those surveyed said the wiretapping scandal hurt their trust in the government while 40.6% said their confidence has not been shaken.

Almost two-thirds of Greeks thought poorly of Mitsotakis’ stance on the issue, although about 61% said the case would not weigh on their vote.

Android 12L-based update is arriving on the Galaxy Tab S8

More ‘forced selling’ ahead? Purpose Bitcoin ETF holdings plunge by 51% in biggest outflow ever By Cointelegraph

Baidu PT Lowered to $195 at Susquehanna