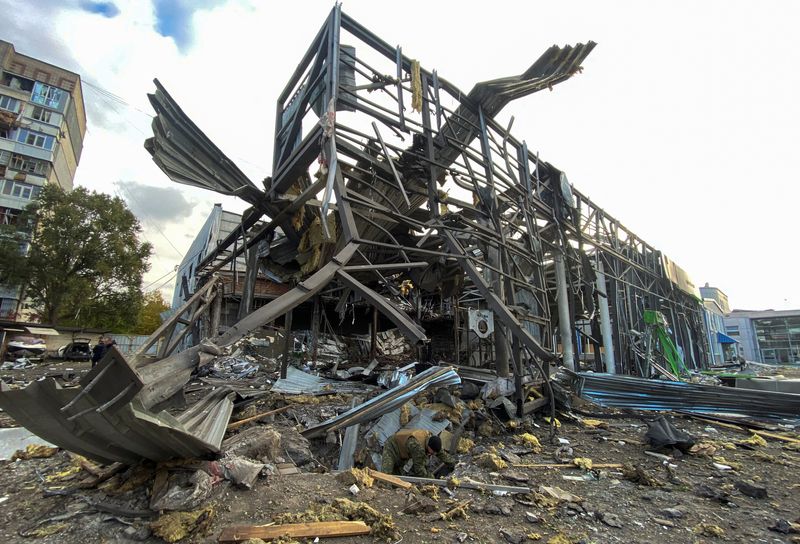 KYIV (Reuters) -Russia has opened a criminal investigation after gunmen shot dead 11 people at a military training ground near the Ukrainian border, authorities said on Sunday, as fighting raged in eastern and southern Ukraine.

Russia’s RIA news agency, citing the defence ministry, said two gunmen had opened fire during a firearms training exercise on Saturday, targeting a group who had volunteered to fight in Ukraine. The “terrorists” themselves were shot dead, it said.

The incident is the latest blow to President Vladimir Putin’s “special military operation” in Ukraine and comes a week after a blast damaged a bridge linking mainland Russia to Crimea, the peninsula it annexed from Ukraine in 2014.

Russia’s defence ministry said the attackers were from a former Soviet republic, without elaborating. A senior Ukrainian official, Oleksiy Arestovych, said the two men were from the mainly Muslim, Central Asian republic of Tajikistan and had opened fire on the others after an argument over religion.

Reuters was not immediately able to confirm the comments by Arestovych, a prominent commentator on the war, or independently verify casualty numbers and other details.

“As a result of the incident at a shooting range in Belgorod region, 11 people died from gunshot wounds and another 15 were injured,” Russia’s Investigative Committee said, announcing the criminal investigation. It gave no other details.

Some Russian independent media outlets reported that the number of casualties was higher than the official figures.

The governor of Belgorod region, Vyacheslav Gladkov, said no local residents were among those killed or wounded.

Putin said on Friday Russia should be finished calling up reservists in two weeks, promising an end to a divisive mobilisation that has seen hundreds of thousands of men summoned to fight in Ukraine and many fleeing the country.

Belarusian President Alexander Lukashenko, a strong Putin ally, said last week that his troops would deploy with Russian forces near the Ukrainian border, citing what he said were threats from Ukraine and the West.

The Belarusian defence ministry in Minsk on Sunday said just under 9,000 Russian troops would be stationed in Belarus as part of a “regional grouping” of forces to protect its borders.

In the 24 hours to Sunday morning, Russian forces targeted more than 30 towns and villages across Ukraine, launching five missile and 23 air strikes and up to 60 rocket attacks, the General Staff of Ukraine’s Armed Forces said on Sunday.

Fighting has been particularly intense this weekend in the eastern provinces of Donetsk and Luhansk, and the strategically important Kherson province in the south, three of the four provinces Putin proclaimed as part of Russia last month.

Shelling by Ukrainian forces damaged the administration building in the city Donetsk, capital of the Donetsk region, the head of its Russian-backed administration said on Sunday.

“It was a direct hit, the building is seriously damaged. It is a miracle nobody was killed,” said Alexei Kulemzin, surveying the wreckage, adding that all city services were still working.

There was no immediate reaction from Ukraine to the attack on Donetsk city, which was annexed by Russian-backed separatists in 2014 along with swathes of the eastern Donbas region.

Russia’s defence ministry said on Sunday its forces had repelled efforts by Ukrainian troops to advance in the Donetsk, Kherson and Mykolaiv regions, inflicting what it described as significant losses.

Reuters was unable to independently verify the battlefield reports.

In the city of Mykolaiv, residents queued on Sunday – as they do every day – to fill water bottles at a distribution point after supplies were severed by fighting early in the war.

“This is not war, this is a war crime. War is when soldiers fight with each other, but when civilians are being fought, it’s a war crime,” said Vadym Antonyuk, a 51-year-old sales manager, as he stood in line.

‘EVEN THE SEA IS ON OUR SIDE’

The spokeswoman for Ukraine’s Southern Military Command said Russian forces were suffering severe shortages of equipment including ammunition as a result of the damage inflicted last weekend on the Crimea Bridge.

“Now even the sea is on our side,” she said.

Putin blamed Ukrainian security services for the bridge blast and last Monday, in retaliation, ordered the biggest aerial offensive against Ukrainian cities, including the capital Kyiv, since the start of Russia’s invasion on Feb. 24.

Russian forces have repeatedly tried to seize Bakhmut, which sits on a main road leading to the cities of Sloviansk and Kramatorsk. Both are situated in the Donetsk region.

Although Ukrainian troops have recaptured thousands of square kilometres (miles) of land in recent offensives in the east and south, officials say progress is likely to slow once Kyiv’s forces meet more determined resistance.

Zelenskiy said almost 65,000 Russians had been killed so far since the Feb. 24 invasion, a figure far higher than Moscow’s official Sept. 21 estimate of 5,937 dead. In August the Pentagon said Russia has suffered between 70,000 and 80,000 casualties, either killed or wounded.

Zelenskiy’s chief of staff, Andriy Yermak, said on Telegram on Sunday that Ukraine would prevail in the war because of the continued military aid it is receiving from the West and the cumulative impact of Western sanctions on Russia’s economy.

“Ukraine’s offensive is strategic and the defeat of Russia is inevitable,” Yermak said.

Grayscale BTC Trust trades at a record 36.7% discount, but is it justified? By Cointelegraph