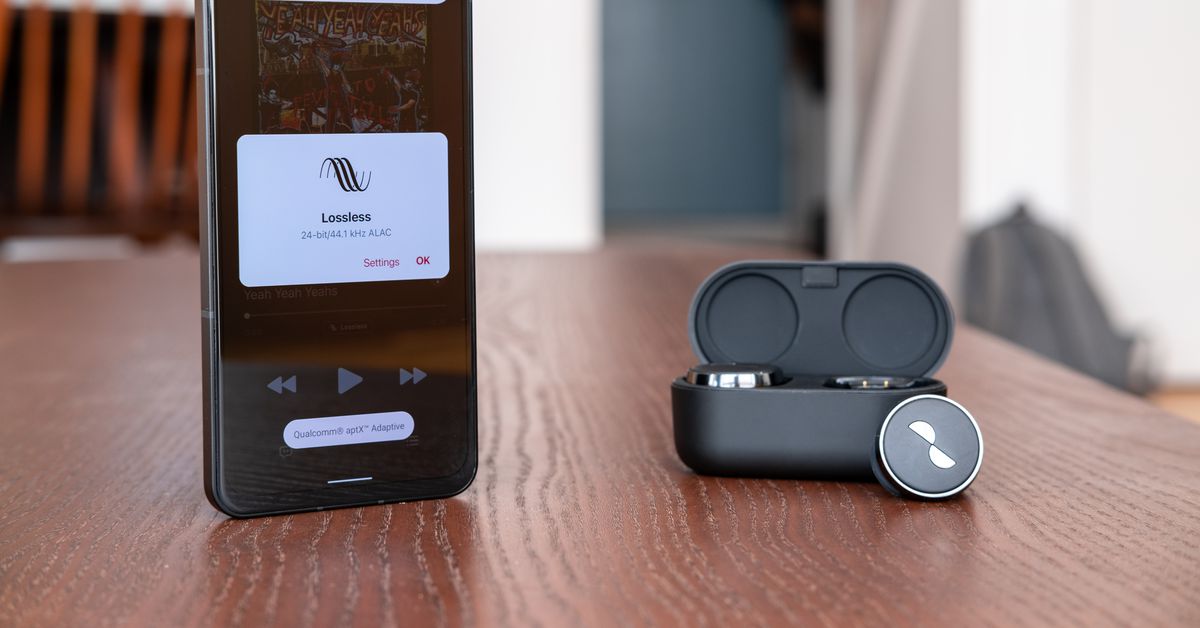 CD-quality music is still the benchmark for decent audio; it’s not quite hi-res, but it’s noticeably better than the lossy, compressed music found on Spotify and your old MP3 library. But actually listening to uncompressed CD-quality music on a phone can still be tricky if convenience is also important. The source material needs to be high enough quality in the first place, and once it reaches your phone you need a way to get it to your headphones without that extra audio quality being compressed away. Easy enough in an era of wired headphones, but a little more difficult with wireless earbuds.

Qualcomm’s new AptX Lossless standard is supposed to finally close the gap between the fidelity of CD-quality audio and the imperfect compression of Bluetooth. Accessing it is still harder than it should be, but after having spent an afternoon comparing it against its predecessor, the difference in quality is very much there.

8 hours of charge from the earbuds themselves.
The charging case offers an extra 24 hours of battery life.

It’s taken a bit of time for hardware to emerge that actually supports the new standard since it was first announced over a year ago. In June, audio company Nura announced the first pair of earbuds with support for AptX Lossless, but only a handful of smartphones on the market are actually compatible with the new codec. That’s finally starting to change, though, with phones such as the Asus Zenfone 9 shipping with built-in support AptX Lossless. Nura provided me with a sample of the phone to be able to properly put its new earbuds through their paces.

The NuraTrue Pro themselves are a fairly typical looking set of true wireless earbuds. They offer 8 hours of charge from the earbuds themselves, an extra 24 hours from the case, and come with four microphones on each earbud to handle calls and noise-canceling. These microphones are also responsible for Nura’s trademark personalized sound technology, which it claims measures your ears to optimize audio for them. Nura is currently funding the earbuds through a Kickstarter campaign, which says that the earbuds are expected to launch in the fourth quarter of this year.

Critically, Nura’s wireless buds support Qualcomm’s AptX Lossless standard. The chip manufacturer says the new Bluetooth technology is able to transmit CD-quality audio (16-bit / 44.1kHz), without any loss of detail (hence “Lossless”). That’s in contrast to its previous highest-resolution codec, AptX HD, which is still heavily compressed despite claims of it transmitting audio that sounds on a par with 24-bit / 48kHz or even 24-bit / 96kHz.

Despite its lossless branding, AptX Lossless isn’t entirely compression-free. There’s still some compression at work here to bring 1.4Mbps CD-quality audio down to the 1Mbps bit-rate that AptX Lossless is capable of transmitting. But the difference here is that the compression being used shouldn’t result in any loss of data, and is “bit-for-bit” exact. “After it’s uncompressed it’s exactly the same as the original,” Nura CEO Luke Campbell says, “Think of a ZIP file. It gets smaller, but it’s exactly what it was when it comes out.”

For my tests I made use of Apple Music’s Lossless audio streaming. I verified that I had all audio quality settings set to their highest available option, and checked the specific audio resolutions listed for each track. In some cases these tracks were actually higher-resolution than the CD-quality audio that AptX Lossless is capable of transmitting, but that shouldn’t matter for the purposes of my comparative test.

In theory the test should be relatively simple, but Qualcomm’s software doesn’t make it particularly easy to see when you’re streaming via AptX Lossless. The new codec is technically an extension of AptX Adaptive, the company’s preexisting codec that dynamically scales your audio’s bitrate depending on your environment. So when I connected the NuraTrue Pro earbuds to the Asus Zenfone 9, a Qualcomm tooltip popped up to note that I was connected via “Snapdragon Sound” and “AptX Adaptive” without specifically mentioning lossless. But between Nura’s confirmation, me listening in an uncrowded location, and Qualcomm’s AptX site specifically mentioning that the device supports AptX Lossless, I’m confident that I’m hearing lossless audio.

Neither Qualcomm’s software nor Android give you an easy way to toggle between different versions of AptX to do an AB test. Instead, on Campbell’s suggestion, I took advantage of the NuraTrue Pro’s multipoint connectivity to directly compare listening via an AptX Lossless-compatible handset (the Asus Zenfone 9) with a regular AptX HD-compatible phone (the Honor 70). With this setup, I could have Apple Music streaming losslessly to both phones, and then have the NuraTrue Pro connected to each one in turn to see what, if any, difference in audio quality I could discern.

To my ears, AptX Lossless appeared to provide a small-yet-noticeable impact on audio quality. It wasn’t a night and day difference (turns out Bluetooth audio compression really has gotten pretty damn good in recent years), but they were the kind of minor differences that are enjoyable to pick out in familiar tracks. A little extra clarity here, a little extra depth there.

Turning to “Hotel California” by Eagles (which Apple Music reports was streaming at a hi-res 24-bit / 192kHz), the benefits of Lossless seemed most obvious in the high frequencies. The plucked guitar notes in the song’s intro had more brightness and sparkle with the Bluetooth quality cranked up to lossless, and every instrument throughout the track felt more present and audible. It never sounded bad when listening on the Honor 70, but the Zenfone 9 just had that little extra bit of detail.

Next up I tried some techno with “Elliptic” by Vessels (16-bit / 44.1kHz, aka CD-quality). While the non-AptX Lossless handset felt like it was getting a little overwhelmed by the track’s thumping bass, the Zenfone 9 gave it a much more balanced sound, with higher pitched audio sounding much more prominent in the mix, and given more space to breathe. It almost felt like AptX Lossless was helping to un-bury the song from a sea of bass.

Finally I gave “Maps” by the Yeah Yeah Yeahs a listen (24-bit / 44.1 kHz). Here, each of the instruments felt more three-dimensional when streamed via AptX Lossless. They sounded less like parts of a music track, and more like physical instruments that had been recorded in a studio.

In each case I’d struggle to call the improvements offered by AptX Lossless transformative. But it felt like it added that little extra bit of detail that I often didn’t realize I was missing. It’s almost like that moment when you start streaming a video, and it looks ok right up until that moment when it buffers properly and pops into focus. It didn’t look “bad” before, but the second you see it in its highest quality you become aware of the deficiencies.

There are always lots of variables when testing audio gear, and I wouldn’t want to draw any final conclusions about AptX Lossless from the time I spent with the NuraTrue Pro. The codec could have a more pronounced impact on higher-end and/or over-ear headphones or with different songs, for example. But, based on my listening, the impact AptX Lossless had was subtle enough that I personally wouldn’t rush out to buy a new pair of headphones based on the audio codec alone (sorry Nura), and I definitely wouldn’t buy a new phone to get support. Even given the choice between two pairs of headphones, I’d probably pick based on subjective audio quality rather than which model has the more advanced audio codec on its spec sheet.

Ideally, AptX Lossless would just become one of those audio features supported by enough smartphones and headphones that you benefit from it without realizing. But while AptX is broadly supported across numerous wireless headphones and Android phones, it’s remained absent from iPhones and AirPods. Lossless Bluetooth streaming might be a great upgrade for any audiophiles who hate the idea of listening to lossy audio, but its subtle benefits might be a harder sell for more mainstream listeners.

Crowdfunding is a chaotic field by nature: companies looking for funding tend to make big promises. According to a study run by Kickstarter in 2015, roughly 1 in 10 “successful” products that reach their funding goals fail to actually deliver rewards. Of the ones that do deliver, delays, missed deadlines, or overpromised ideas mean that there’s often disappointment in store for those products that do get done.

The best defense is to use your best judgment. Ask yourself: does the product look legitimate? Is the company making outlandish claims? Is there a working prototype? Does the company mention existing plans to manufacture and ship finished products? Has it completed a Kickstarter before? And remember: you’re not necessarily buying a product when you back it on a crowdfunding site.

Photography by Jon Porter / The Verge

How to increase your personal safety with Pixel and Samsung phones

Age of Empires is coming to a mobile device near you