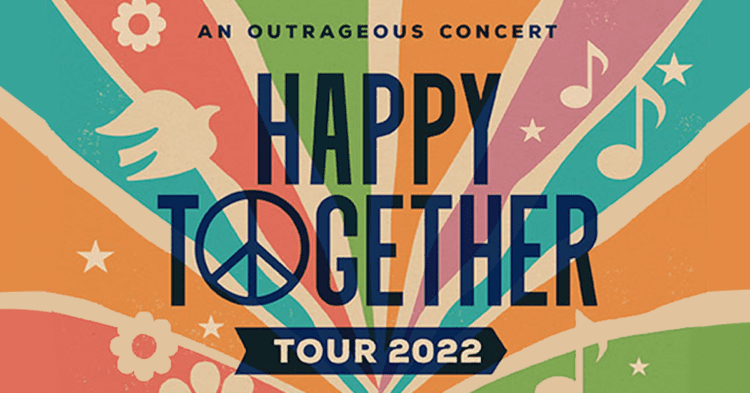 Oldies tours are always fun. They provide a wonderful forum for bands whose best days have gone by, but the songs are still the same, and still great. On Thursday, July 14, 2022, Tucson was treated to a glorious dose of nostalgia when the “Happy Together” tour swept through town. The newly christened Linda Ronstadt Music Hall played host to the 60’s oldies tour which features the biggest hits from six legendary acts.

Per the tour’s press release, “2022 will mark the 13th year of the highly successful, hit-filled summer package, The ‘Happy Together’ tour. The memory filled music show has played more than 50 plus shows a year and 2022 will be no exception. The touring sensation has crisscrossed the nation delighting audiences with a show full of chart-topping hits from the ‘60s and ‘70s. With an undeniable 61 Billboard Top 40 smashes. The tour is once again joined by The Turtles, who also act as musical hosts. Along with The Turtles will be Gary Puckett & The Union Gap, The Association, The Buckinghams, The Vogues and The Cowsills”. The current iteration of the show began in early June and continues through August.  Each band played between three and five songs to the delight of a packed house. First up on the bill, The Cowsills.

Per the tour site, “The harmonious family act of brothers and sister Bob, Paul, & Susan Cowsill, who inspired the smash hit ‘70s television show, ‘The Patridge Family.’” This was a perfect way to begin the show. After The Cowsills greeted the crowd, they launched into one of the defining hits of the late 60’s with “The Rain, The Park and Other Things”. More commonly known as “The Flower Girl”, the tune reached #2 on the U.S. Billboard Hot 100 in the fall of 1967. After ironing out some initial audio kinks, the family band charmed the audience with other hits including “Indian Lake” and a rousing rendition of “Hair”. A strong performance both musically and vocally! Next up, The Vogues.

Per their site, “Known for their harmony-driven soaring pop, The Vogues unique sound was instantly recognizable and memorable. It was a lively fresh rock ’n roll with an American style that pierced the British invasion. Their first song to top the charts at #4 was ‘You’re the One’ in 1965. The Vogues had numerous Top 10 hits with singles such as ‘Five O’Clock World’, ‘Turn Around Look at Me,’ and ‘My Special Angel’.  From the mid 1960’s into the 70’s, they were heard on radio stations and top television shows including The Ed Sullivan Show. Still one of the top vocal groups touring today, The Vogues were inducted into the Vocal Group Hall of Fame in 2001.” The current lineup features Troy Elich, Royce Taylor, and Shawn Stevens. This polished trio comes across smoother than silk and their harmonies are second to none! Following The Vogues was The Buckinghams.

Per their site, “One of the most beloved and respected Chicago bands ever to explode onto the national scene! The Buckinghams went on to become one of the top selling acts of late 1960’s, including their #1 hit ‘Kind of a Drag’. Other hits include ‘Don’t You Care,’ ‘Mercy, Mercy, Mercy’ and ‘Hey Baby, They’re Playing Our Song.’  In 1967, The Buckinghams recorded in Columbia’s New York and Los Angeles studios, in between more than 300 tour dates. With 3 chart hits at one time on 2 labels, in 1967, Billboard Magazine named them ‘The Most Listened to Band in America’. Original founding members Carl Giammarese and Nick Fortuna joined the ‘Happy Together’ tour in 2012”. The songs were tight and strong. The Buckinghams sounded as close to their record as any act!  This performance was anything but a drag! On to The Association.

After a brief intermission, it was time for The Association to take the stage. Per their bio, “The Association enjoyed massive radio success in the ‘60s. Their #1 hits included ‘Windy,’ ‘Never My Love’ and ‘Along Comes Mary’. In 1967, The Association® made history being the first band anywhere to open a rock festival – the now historic, Monterey Pop Festival. In addition to RIAA certifications for 6 gold and 3 platinum records, the band also carries 7 Grammy nominations. The present roster features longtime members Jules Alexander, Del Ramos and Paul Holland”. After more than 50 years on the road, these guys can still rock! Never missing a note, the band provided the audience a bit of reminiscence overload, especially during their smash single, “Cherish”. Following The Association, the one and only Gary Puckett.

Armed with one of the most distinctive vocal ranges of the last half century, Gary Puckett is in a class by himself. His bio states, “With his band The Union Gap, Puckett’s unmistakable signature voice garnered six consecutive gold records and top ten Billboard hits. The titles consist of multiple pop classics such as ‘Woman Woman,’ ‘Lady Willpower’, ‘Over You,’ and ‘This Girl is a Woman Now.’ In 1968 Gary Puckett and The Union Gap had six consecutive gold records and sold more records than any other recording act…including the Beatles.” A longtime stalwart of the “Happy Together” tour, Puckett is always a showstopper. This show was no different. And while Gary may not be the full version of his 1968 self, he is pretty close. A blistering version of “Young Girl” brought the loudest cheers of the night! Last group, The Turtles.

Fittingly, The Turtles were the sixth and final group of the night. According to their bio, “The Turtles have sold over 40 million records worldwide. They are best known for their harmony-heavy California pop sound. Their timeless hits include ‘Elenore,’ ‘She’d Rather Be with Me,’ ‘You Showed Me’ and, ‘Happy Together.’ Also the title of the tour, ‘Happy Together’ reached #1‘in March of 1967. The Turtles ruled the airwaves in the late ‘60s and continue as the signature headliners. This lineup sees the voice of the Archies, Ron Dante, again joining Turtles founding member and singer Mark Volman. (Fellow Turtles founder, Howard Kaylan, hasn’t participated for several years.)” The tunes were cozy and familiar as The Turtles once again sent the audience on a groovy nostalgia trip. The harmonies, so warm and inviting, provided a fantastic way to end the night – or so the crowd thought…

The encore saw all acts return to the stage and perform portions of their top hits. It was a fun celebration recapping the night’s festivities. It also put it in perspective just how many classic hits the audience had just been treated to. It was a tremendous all-around evening of music and memories!

40 Best Birthday Jokes for Kids To Celebrate Their Special Day

The 10 Best Shalamar Songs of All-Time

The 10 Best Fitz and the Tantrums Songs of All-Time

The 10 Best Anti-War Songs of All-Time