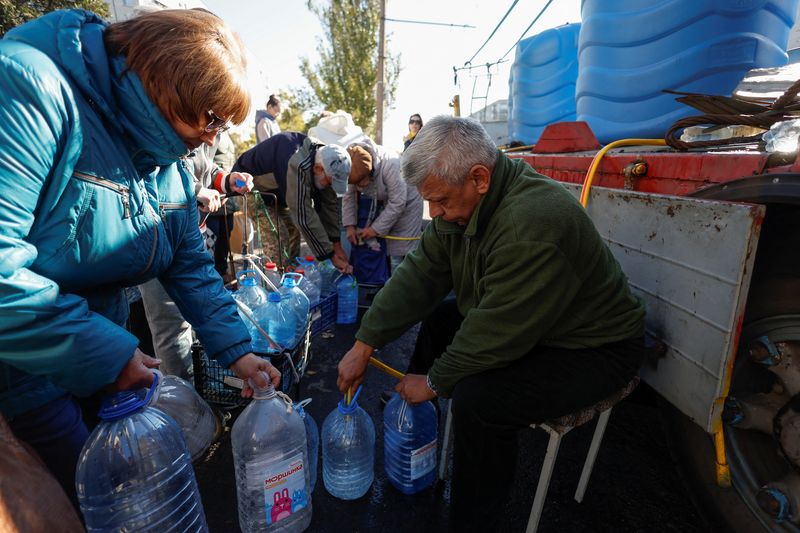 © Reuters. Local people fill up bottles with fresh drinking water, as the main supply pipeline for drinking water for the city was damaged in Kherson region at the beginning of Russia’s attack on Ukraine, in Mykolaiv, Ukraine October 16, 2022. REUTERS/Valentyn Ogir

MYKOLAIV, Ukraine (Reuters) – Sveta has no doubt about why the Ukrainian-held southern city of Mykolaiv, a ship-building centre that is home to a half a million people, has gone without fresh water for the past six months.

“They (the Russians) are committing genocide against us,” she growled as she waited this week with dozens of others to fill containers with water from tanks hauled to a downtown thoroughfare aboard an electric tramway repair car.

The shutoff is bitter affirmation for Sveta, and some 220,000 other residents who remain in the oft-shelled city, that Russian President Vladimir Putin’s war on Ukraine extends beyond the battlefield to civilian infrastructure.

The Kremlin dramatically intensified strikes on energy facilities with pre-winter missile and drone onslaughts over the past two weeks, in what Putin has called legitimate retaliation for an attack on Russia’s bridge to Crimea.

The attacks have disrupted electricity across large parts of Ukraine, killing dozens of people and leaving other places without access to clean water.

But Mykolaiv’s water problems have gone on much longer.

The Russians, Ukrainian officials say, closed the city’s freshwater intakes in the adjacent Kherson province after they overran the region as part of what Putin calls “a special military operation.”

“We don’t know whether this was an intentional explosion or an accidental ammunition strike,” municipal water chief Borys Dydenko told Reuters. He said he believed the Russians shut the intakes to avenge Ukraine’s closure of freshwater supplies to Crimea in 2014. The Kremlin and the Russian defence ministry did not immediately respond to requests for comment.

‘THE WAY WE LIVE’

Every day, Mykolaiv’s residents lug plastic containers by hand or in carts to water distribution points across the city that sits at the sweeping confluence of the Dnipro and Southern Buh rivers.

“This is the way we live,” lamented Yaroslav, 78, a retiree who worked at the Chernomorsk Shipbuilding Yard, as he queued behind Sveta. “We live through one day and there is no joy and then there is the next day.”

Peter Gleick, a senior fellow at the Pacific Institute, a California thinktank that documents the impact of conflicts on water resources worldwide, said Russia has weaponised water since launching its full-scale invasion in February.

“Ukraine’s water infrastructure, from dams to water treatment and wastewater systems, has been extensively targeted by Russia,” Gleick wrote in an email. International law, he noted, makes striking civilian infrastructure a war crime.

In just the first three months of the war, Gleick said, he and his colleagues documented more than 60 instances in which Ukraine’s civilian water supplies were disrupted and dams for both water and hydroelectric power attacked.

Russia has acknowledged targeting power plants while also saying it makes every effort to spare the civilian population. The United Nations has confirmed more than 14,000 civilian deaths and says actual numbers are likely considerably higher.

Ukraine, according to the Pacific Institute’s database, has occasionally also used water as a weapon, cutting supplies off to Crimea after Russia seized the peninsula in 2014.

While Kyiv had no legal obligation to maintain the supply “it could be argued that it would have been a humanitarian thing to do,” Gleick said.

Ukrainian troops released water from a Dnipro River dam to slow Russia’s failed assault on Kyiv in February, according to the database. Residents in the eastern city of Donetsk, captured by Moscow-backed separatists in 2014, have also suffered water shortages. The Russian-installed government there did not immediately respond to a request for details of the situation.

“Others have problems of a local nature and are able to solve them,” Dydenko told Reuters. “We are the only ones with such a colossal disaster.”

After nearly a month without water, city officials were forced to begin pumping yellowish, salty water from the Southern Buh River estuary to clear sewers and let residents flush toilets and wash. It emits a pungent industrial odour, foams in toilets, and makes soap hard to lather and rinse.

Worst of all, it is corroding holes in the city’s pipes.

Eventually, Dydenko said, the whole system will have to be replaced at a huge cost that Mykolaiv cannot meet, with factories idled and revenues from a dwindling population also down.

“It’s a catastrophe,” he said, accusing the Russians of refusing requests for a ceasefire so that the freshwater intakes could be inspected and any repairs made.

Bottles of water are available in stores, but many residents, impoverished by war, depend on bottled water donations from abroad, even as pools of water snake onto streets from leaking mains.

“This is the fifth leakage in three days,” said Vitalii Tymoshchuk, 45, a repair crew foreman, standing by a hole dug for his mud-smeared men to fix the pipe in a Mykolaiv suburb.

Dydenko said he has no choice but to keep his crews patching leaks as long as possible because the salt water is untreatable.

“Our task today is to preserve all of this and last through the winter,” he said. “It will not be easy and there will be more problems.”

Twitter’s icons are getting a new look

Fed may be alert to favoured yield curve alarm :Mike Dolan By Reuters